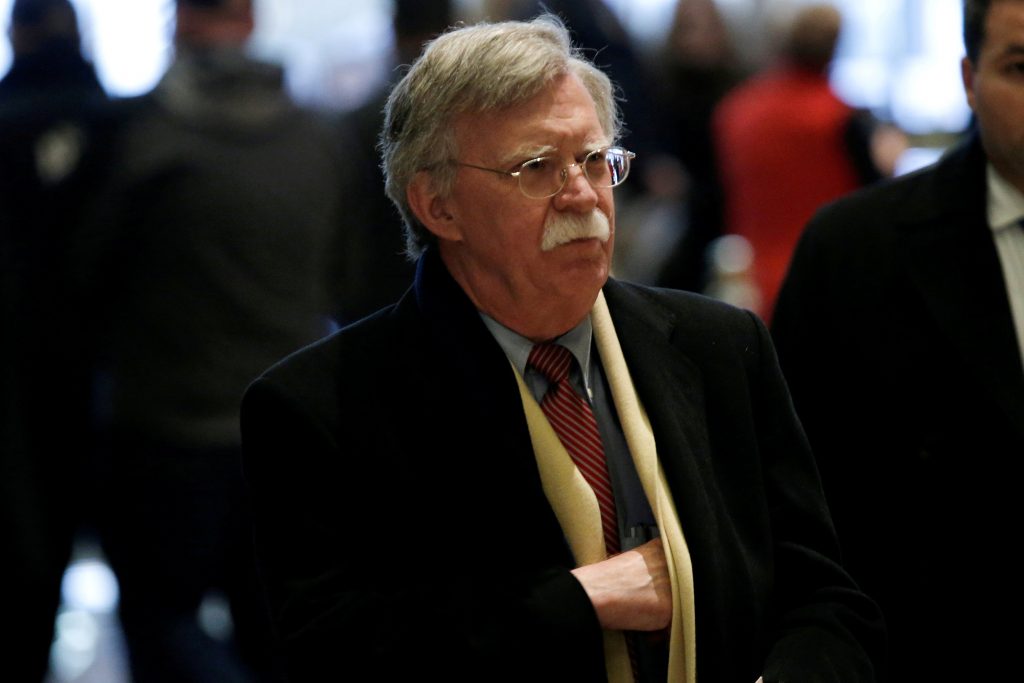 Trump announced that he was replacing H.R. McMaster with John Bolton, a former U.S. ambassador to the United Nations known for his hard-line stance advocating the use of military force against North Korea and Iran.

Once rejected by North Korea as “human scum,” Bolton has called for regime change in North Korea, prompting worries in Asia ahead of a historic summit between Washington and Pyongyang.

Administrative officials in Seoul said they would continue communicating closely with Washington over the ongoing detente with North Korea, but their comments were tinged with worry.

“Our stance is that if a new road opens, we have to go that path,” a senior Blue House official told reporters. “Bolton has much knowledge on the issues regarding the Korean peninsula and most of all, we know him to be one of the U.S. president’s aides who is trusted.” He said Chung Eui-yong, South Korea’s National Security Office head, had not yet spoken with Bolton and that Chung’s reaction to McMaster’s dismissal was “not bad.”

Another administrative official in Seoul expressed regret over the loss of camaraderie McMaster had built with his South Korean counterpart as they had tackled North Korea’s nuclear issue together.

Both officials requested not to be named due to the sensitivity of the issue.

Bolton had described Trump’s plan to meet North Korean leader Kim Jong Un as “diplomatic shock and awe” and said it would be an opportunity to deliver a threat of military action.

“I think this session between the two leaders could well be a fairly brief session where Trump says, ‘Tell me you have begun total denuclearization, because we’re not going to have protracted negotiations. You can tell me right now or we’ll start thinking of something else,'” he told Washington’s WMAL radio station.

Former South Korean intelligence official Nam Sung-wook said Trump may not even get the opportunity to deliver that message.

“Bolton being tapped for this position makes for a very difficult situation where the U.S.-North Korea summit may not even happen,” he said. “It’s going to be a rocky path even before the summit.”

The meeting is supposed to happen by the end of May, but an exact time and place have yet to be settled on.

Pyongyang had no immediate comment about Bolton, whose criticism of then-North Korean leader Kim Jong Il and Pyongyang’s human rights record in 2003 spurred state media to call him “human scum” and “bloodsucker.”

The administration of South Korean President Moon Jae-in is keen to see successful talks between the United States and North Korea. The two Koreas are also scheduled to hold their first summit in more than a decade in late April, building on friendly exchanges that began after Kim Jong Un said in a New Year’s address he wanted to improve ties with South Korea.

That goodwill could disappear with Bolton’s appearance, others said.

“If Bolton take office and talks with North Korea go haywire and yield bad results, I don’t know what we’ll do then,” said Kim Hack-yong, conservative lawmaker and head of the National Defense Committee of South Korea’s parliament.

“It might be great if Kim Jong Un comes to talks with a free spirit but any turns in a negative direction could mean all our work over the years to engage North Korea could turn to dust.”

Bolton, in an op-ed in the Wall Street Journal last month, concluded it was “perfectly legitimate for the United States to respond to the current ‘necessity’ posed by North Korea’s nuclear weapons by striking first.”

Bolton’s appointment will further diminish hope for China and the United States to see eye-to-eye on security issues, according to Shi Yinhong, an expert on China-U.S. relations at Renmin University in Beijing.

Tokyo expressed hopes that communication with Washington would go on as normal, with one Japanese government official saying he was “very optimistic” Japan would be able to get along with Bolton as he has many friends inside the Japanese government.

Narushige Michishita, a professor at Tokyo’s Graduate Institute for Policy Studies, said Bolton’s insistence on pressure and sanctions was “good news” but his toughness could present a hurdle in dealing with Pyongyang.

“The bad news is, sometimes he is too tough,” Michishita said. “He is consistently tough. The problem is that he doesn’t have any flexibility. That’s a negative concern that I have.”