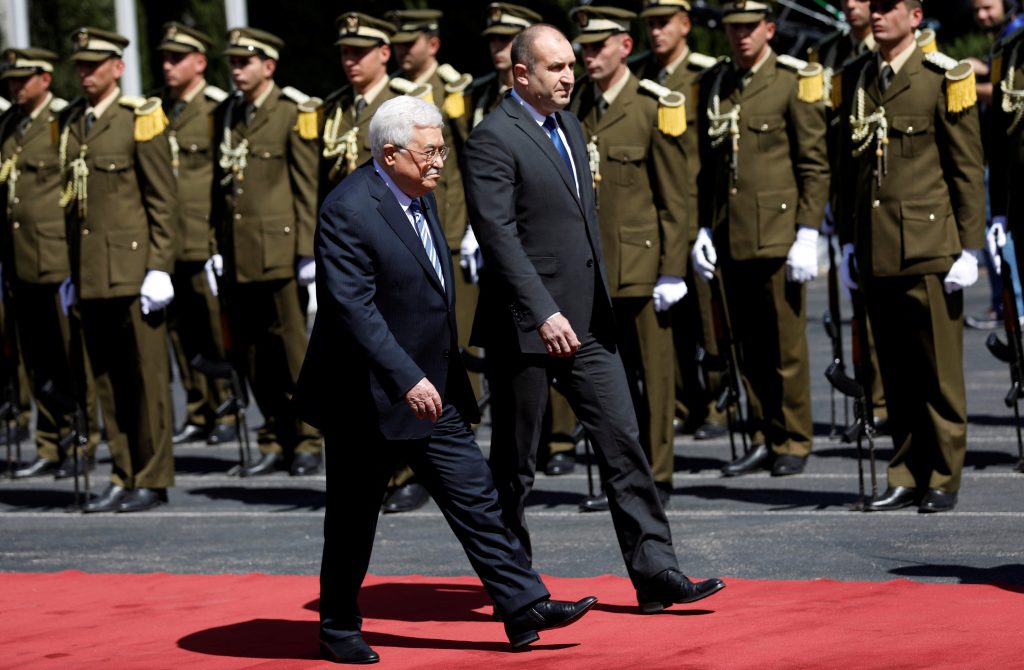 A series of recent health scares have raised new concerns about octogenarian President Mahmoud Abbas, reviving anxiety about a potentially chaotic, and even bloody, succession battle.

In the latest sign of Abbas’ health troubles, officials and medical sources say a cardiologist has moved into the presidential compound in Ramallah to monitor the longtime leader.

The move follows a mysterious hospital visit in the United States after Abbas appeared weak in an address to the United Nations Security Council.

Abbas, a heavy smoker with long-standing heart problems who turns 83 next week, insists he is fine. But after more than a decade of avoiding discussion of the post-Abbas era, Palestinian officials acknowledge that they are concerned, and potential successors are quietly jockeying for position.

The topic of succession has been taboo in Palestinian official circles since Abbas took office 14 years ago. Abbas took over as a caretaker leader following the death of Palestinian leader, arch-terrorist Yasser Arafat in 2004, and was elected for what was supposed to be a five-year term the following year. He has remained in firm control since then, refusing to designate a successor while a political split with rival Hamas prevented new elections.

Abbas has a long history of health issues, ranging from his heart troubles to a bout with cancer a decade ago.

Concerns deepened after Abbas’ Feb. 20 appearance before the U.N. Security Council, where he appeared to struggle for breath at times.

After the speech, he traveled to Baltimore for a series of tests at Johns Hopkins Hospital. Feeling fatigued, Abbas then decided to return to Ramallah rather than continue on to Venezuela, as initially planned, according to three Abbas aides who spoke on condition of anonymity because they are under strict orders not to discuss his health.

It was rare for Abbas to cancel a planned trip.

Abbas said after his return that the medical tests conducted in the U.S. yielded “positive and reassuring” results, but did not elaborate.

A Palestinian official and two medical sources said a heart specialist is now present at the presidential compound whenever Abbas is there. Abbas’ regular physician visits the compound every day as well.

The medical sources spoke on condition of anonymity because they were not authorized to discuss Abbas’ health. One said he requires medication and close attention.

An opinion poll released this week found that 68 percent of the Palestinian public wants Abbas to resign, and just 33 percent of those surveyed said they were satisfied with his performance.

The poll, conducted by the Palestinian Center for Policy and Survey Research, surveyed 1,200 people and had a margin of error of 3 percentage points.

A number of top officials in Abbas’ Fatah movement head the list of potential successors.

Jibril Rajoub, a former security chief, and Mahmoud Aloul, a longtime Fatah leader, are both members of the party’s decision-making Central Committee.

Abbas’ current security chief, Majed Farraj, is another strong contender, with good behind-the-scenes working relations with both Israel and the U.S.

Mohammed Dahlan, an exiled rival of Abbas who now lives in the United Arab Emirates, also enjoys some support, but the local leadership opposes him.

For now, Abbas refuses to designate a successor. That could set the stage for bitter and potentially violent infighting down the road.