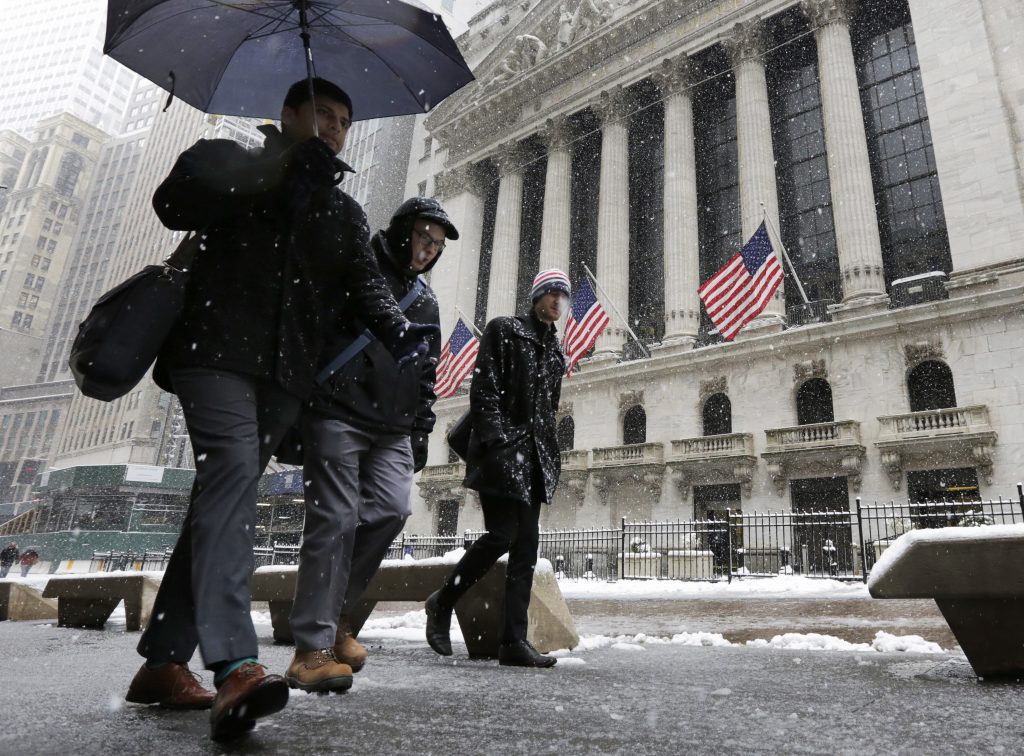 U.S. stocks are rising Wednesday as investors wait for news on interest rates from the Federal Reserve. The Fed is widely expected to raise rates, and investors will be watching closely for clues about how many more increases the central bank may make this year and also for the Fed’s assessment of how the economy is doing.

Energy companies are rising along with the price of oil and smaller, more U.S.-focused companies are climbing. Home-builders are up following a report that sales increased in February. Cereal maker General Mills is sinking after it reported rising expenses and cut its profit forecast.

FED WATCH: Federal Reserve policymakers are wrapping up a two-day policy meeting that is expected to result in another increase in interest rates. One of the key debates on Wall Street is whether the Fed will wind up increasing rates four times this year instead of three. Investors will be watching for new Fed Chairman Jerome Powell’s comments at a press conference Wednesday afternoon.

Bond prices were stable. The yield on the 10-year Treasury note was unchanged after it jumped to 2.90 percent Tuesday.

THE QUOTE: David Kelly, the chief global strategist for JPMorgan Asset Management, said stocks usually do well when interest rates are rising, but only up to a point.

“If interest rates are rising from a low level, there’s more optimism about the economy, and that generally is a more positive thing,” he said. That’s the case right now, but with an important difference: interest rates have been historically low for about a decade. Because the economy has adjusted to those low rates, he said the Fed should stop raising rates after this year.

Kelly added that the Fed and the government need to be careful to focus on smooth growth, as the recent tax cuts will dump some short-lived stimulus into the economy.

“The overall effect of the tax cut is to deliver another keg to a keg party at 2 a.m.,” he said. “The party is probably going to go a little longer but the hangover is going to be worse.”

SWEET HOMES: Home-builders rose after the National Association of Realtors said sales of already-built homes jumped in February. That came after declines in December and January, and shows many Americans are still looking to buy, despite rising prices and a shrinking number of homes on the market.

SPILLED MILK: General Mills, the maker of Cheerios cereal, Yoplait yogurt and other packaged foods, plunged after its third-quarter results were hurt by rising freight and commodity costs. The company also cut its annual profit outlook. The stock dropped $4.65, or 9.3 percent, to $45.28.

RE-FRIENDED: After early losses, Facebook rose $4.30, or 2.5 percent, to $172.45. The stock fell a total of 9 percent Monday and Tuesday following reports a data mining firm working for President Donald Trump’s campaign took data from the accounts of 50 million Facebook users without their permission. That led authorities in Britain and the U.S. to launch investigations into Facebook’s handling of user data.

The stock is down 11 percent from the all-time high it set Feb. 1.

Department store operator Nordstrom slipped $1.09, or 2.2 percent, to $48.26 after the company said it ended buyout talks with top executives and family members of the company’s founder, saying it couldn’t get the group to raise its price. Earlier this month it rejected an offer of $50 a share.

Qualcomm slipped 45 cents to $57.81 and NXP Semiconductors lost 68 cents to $122.42 after Bloomberg News reported that regulators in China aren’t willing to approve Qualcomm’s purchase of NXP until Qualcomm agrees to more protections for local companies.

GROUNDED: Airlines skidded after Southwest said its revenue is suffering as it cuts fares to compete with other companies. Southwest also said the retirement of some Boeing 737-300 planes and the timing of spring break holidays is affecting its business.