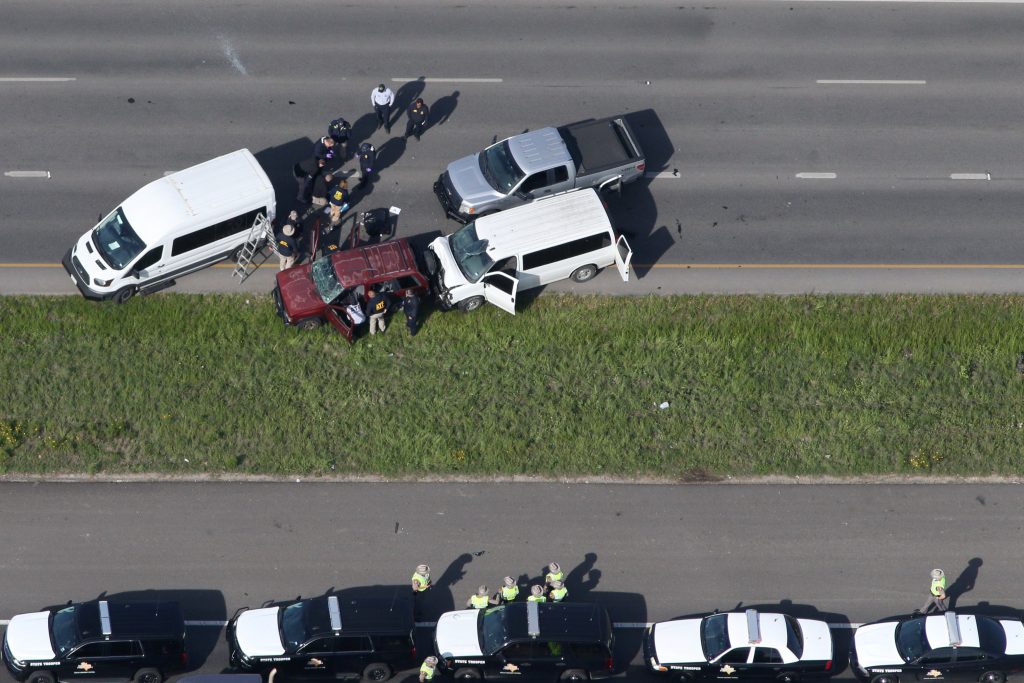 The suspect in the deadly bombings that terrorized Austin blew himself up early Wednesday as authorities closed in on him, bringing a grisly end to a three-week manhunt. But police warned that more bombs could be out there.

The young man behind the attacks was identified as Mark Anthony Conditt, an unemployed 23-year-old, who bought bomb-making materials at Home Depot. His motive remained a mystery, along with whether he acted alone in the five bombings in the Texas capital and suburban San Antonio that killed two people and wounded four others.

Police zeroed in on Conditt using store surveillance video, cellphone signals and witness accounts of a strange-looking customer making purchases while wearing a disguise that included a blonde wig and gloves.

Officers located his vehicle at a hotel on Interstate 35 in the suburb of Round Rock. Officers were waiting for armored vehicles to arrive before moving in for an arrest when his vehicle began to drive away, Austin Police Chief Brian Manley said at a news conference.

Authorities followed the vehicle, which ran into a ditch on the side of the road, he said.

When members of the SWAT team approached, the suspect detonated an explosive device inside the vehicle, the police chief said.

Investigators released few details about Conditt, except his age and that he was white. Online postings indicate he was home schooled. He later attended Austin Community College from 2010 to 2012, according to a college spokeswoman, but he did not graduate.

The mayor of Pflugerville, which is not far from the site of the first bombing, said the suspect lived in his city, just two blocks from his house.

Pflugerville resident Jay Schulze said he was jogging Tuesday night when he was stopped by police and asked about the bombings. He said police flew drones over a home for about six hours between Tuesday evening and early Wednesday morning.

He described the home over which the drones were flying as “a weird house with a lot of people coming and going” and a bit rundown.

A neighbor who watched Conditt grow up says he “always seemed like he was smart” and “polite.” Jeff Reeb said he has lived next to Conditt’s parents for about 17 years and described them as good neighbors. He said Conditt, who lived with roommates a few miles away, had visited his parents regularly.

Austin was hit with four package bombings starting on March 2. A fifth parcel bomb went off early Tuesday at a FedEx distribution center near San Antonio.

Rep. Michael McCaul, a Republican from Austin, said Conditt’s “fatal mistake” was walking into a FedEx store to mail a package because that allowed authorities to obtain surveillance video that showed him and his vehicle, along with his license plate number. From there, he told Austin station KXAN, investigators could identify the suspect and eventually track him using his cellphone.

Police warned Wednesday of the possibility that more bombs had yet to be found.

“We don’t know where this suspect has spent his last 24 hours, and therefore we still need to remain vigilant to ensure that no other packages or devices have been left to the community,” Manley said.

By midday, Pflugerville police began evacuating the area around the suspect’s home to deploy a robot to check for explosives.

Authorities initially believed the bombings may have been hate crimes because the victims of the earliest blasts were black, but they backed off that theory after Hispanic and white victims from different parts of the city were also affected.

Fred Milanowski, an agent with the U.S. Bureau of Alcohol, Tobacco, Firearms and Explosives, said it was “hard to say” if the bombing suspect had acted alone.

“What we do know is we believe the same person built each one of these devices,” said Milanowski, the agent in charge of the Houston division of the ATF.

Austin Mayor Steve Adler thanked law enforcement for their work in bringing down the suspect and urged residents to continue to report anything that appeared suspicious or out of place.

Isaac Figueroa, 26, said he and his brother heard sirens and helicopters early Wednesday in the area and drove toward them, then cut through nearby woods on foot after they hit a police roadblock.

Figueroa said they saw a sport utility vehicle that was pinned between vehicles and “looked like it had been rammed off the road.” He said he saw police deploy a robot to go examine the jeep.

President Donald Trump, who had earlier said whoever was responsible for the Austin bombings was “obviously a very sick individual or individuals,” tweeted, “AUSTIN BOMBING SUSPECT IS DEAD. Great job by law enforcement and all concerned!”

The suspect’s death followed a day of rapid-fire developments in the case. Early Tuesday, a bomb inside a package exploded as it passed along a conveyor belt at a FedEx shipping center in Schertz, northeast of San Antonio and about 60 miles (95 kilometers) southwest of Austin.

Later in the day, police sent a bomb squad to a FedEx facility outside the Austin airport to check on a suspicious package. Authorities later said that package contained an explosive that was tied to the other bombings.

The Schertz blast came two days after a bombing wounded two men Sunday night in an Austin neighborhood about 3 miles from the FedEx store. It was triggered by a nearly invisible tripwire.