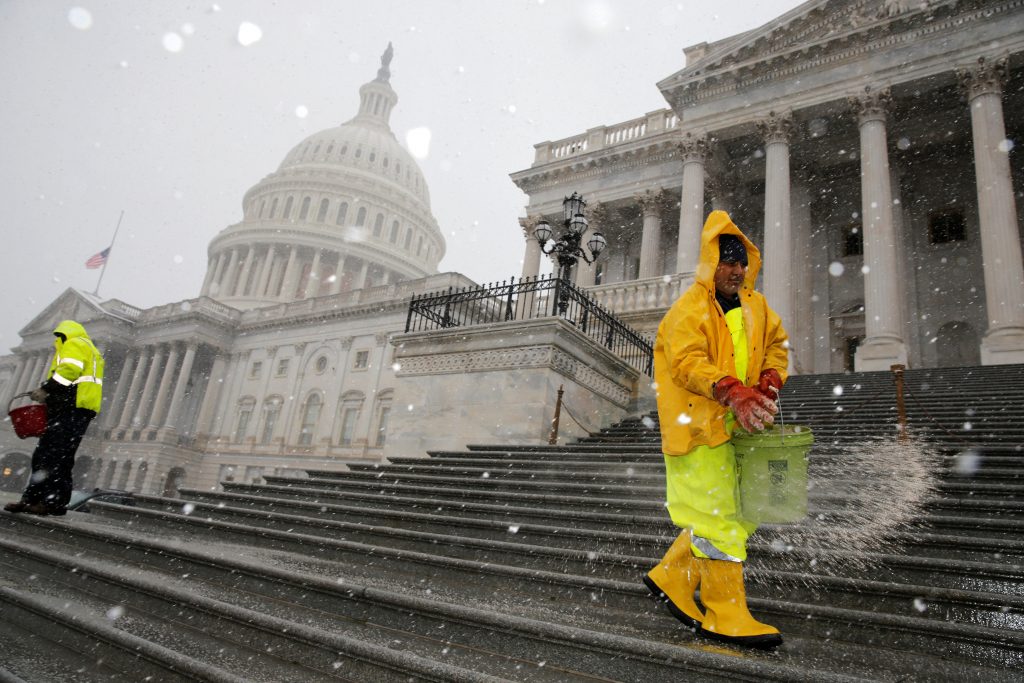 Negotiators on a $1.3 trillion government spending bill officially dropped protections for so-called Dreamer immigrants and gave President Donald Trump only a partial victory on a round of funding for his U.S.-Mexico border wall as talks entered the final stage on Wednesday.

GOP aides said that Trump would win $1.6 billion for border wall and physical barriers along the border, which would construct older wall designs and repair existing segments. But Trump would be denied a more recent, far larger $25 billion request for multi-year funding for the wall project. Democrats said just $641 million would go to new segments of fencing and walls that double as levees.

Negotiators planned to officially unveil the massive government-wide spending bill later in the day in hopes of passing it before a Friday midnight deadline to avoid a government shutdown. A temporary funding bill to keep operations going this weekend might be required.

The top four leaders of both the House and Senate met Wednesday and emerged saying they basically had a deal.

The bill would give Trump a huge budget increase for the military, while Democrats would cement wins on infrastructure and other domestic programs that they failed to get under President Barack Obama. It funds a 2.4 percent pay raise for military personnel touted by Republicans.

The aides required anonymity because the agreement is not yet public.

Battles over budget priorities in the huge bill were all settled, while a handful of non-budget issues remained, including a GOP effort to fix a poorly drafted section of the recent tax-cut law that is harming Midwestern grain companies.

As expected, the measure won’t renew protections for young Dreamer immigrants facing possible deportation. It also won’t provide subsidies to insurers who cut costs for low-earning customers. And it won’t have federal payments to carriers to help them afford to cover their costliest clients.

Another fight would remove an earmark protecting money for a rail tunnel under the Hudson River that’s a top priority of Trump’s most powerful Democratic rival, Senate Minority Leader Chuck Schumer (D-N.Y.). The project would remain eligible for funding, however, and a Schumer aide said the project was likely to win well more than half of the $900 million sought for Gateway this year under rules governing various Department of Transportation accounts.

The measure on the table would provide major funding increases for the Pentagon — $80 billion over current limits — bringing the military budget to $700 billion and giving GOP defense hawks a long-sought victory.

“We made a promise to the country that we would rebuild our military. Aging equipment, personnel shortages, training lapses, maintenance lapses — all of this has cost us,” said House Speaker Paul Ryan (R-Wis.). “With this week’s critical funding bill we will begin to reverse that damage.”

Domestic accounts would get a generous 10 percent increase on average as well, awarding Democrats the sort of spending increases they sought but never secured during the Obama administration.

Both parties touted $4.6 billion in total funding to fight the nation’s opioid addiction epidemic, a $3 billion increase. More than $2 billion would go to strengthen school safety through grants for training, security measures and treatment for the mentally ill. Medical research at the National Institutes of Health, a longstanding bipartisan priority, would receive a record $3 billion increase to $37 billion.

Community development block grants, which are flexible funds that are enormously popular with mayors and other local officials, would receive a huge $2.4 billion increase to $5.2 billion despite being marked for elimination in Trump’s budget plan. And an Obama-era transportation grant program known as TIGER would see its budget tripled to $1.5 billion. Head Start for preschoolers would get a $610 boost, while an additional $2.4 billion would go for child care grants.

“We have worked to restore and in many cases increase investments in education, health care, opioids, NIH, child care, college affordability and other domestic and military priorities,” said Sen. Patty Murray (D-Wash.), a key negotiator of the measure.

Agencies historically unpopular with Republicans, such as the IRS, appear likely to get increases too, in part to prepare for implementation of the Republicans’ recently passed tax measure. The Environmental Protection Agency, always a GOP target, would have its budget frozen at $8 billion.

Lawmakers agreed on the broad outlines of the budget plan last month. The legislation implementing that deal is viewed as possibly one of few bills moving through Congress this year, making it a target for lawmakers and lobbyists seeking to attach their top priorities.

And while Democrats yielded on $1.6 billion in wall funding, none of that money would go for the new prototypes that Trump recently visited in San Diego. Negotiators rejected Trump’s plans to hire hundreds of new Border Patrol and immigration enforcement agents, congressional aides said.

Republican conservatives are dismayed by the free-spending measure, which means Democratic votes are required to pass it. That gave Democrats leverage to force GOP negotiators to drop numerous policy riders that Democrats considered poison pills.