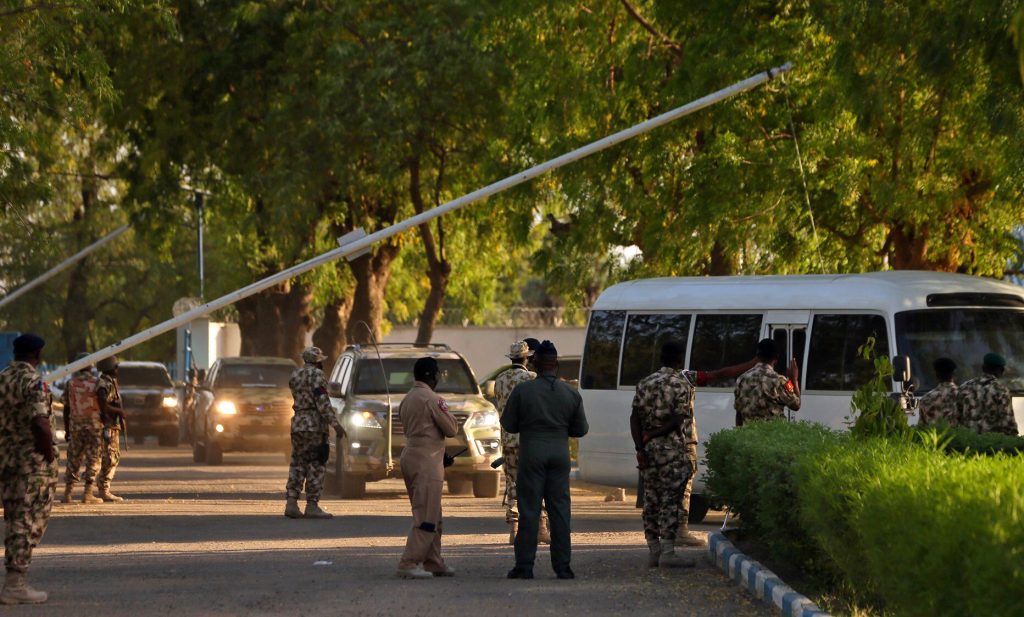 Boko Haram Islamic terrorists brought back nearly all of the 110 girls they had kidnapped from a boarding school last month, dropping them off in the middle of the night Wednesday with a warning: “Don’t ever put your daughters in school again.”

Several of the girls interviewed by The Associated Press said they had been traveling for days before the convoy of vehicles arrived in the center of the town of Dapchi around 2 a.m. Residents who had fled upon hearing that Boko Haram was headed their way watched from hiding as dozens of girls descended from the vehicles apparently unharmed.

“We were freed because we are Muslim girls and they didn’t want us to suffer. That is why they released us,” said Khadija Grema, one of the freed girls who said a Christian classmate remained captive.

The extraordinary development brought elation to most of the families, but more heartache for the relatives of the six girls still unaccounted for. The sister of one girl fainted Wednesday upon hearing that she was not among those freed.

One 14-year-old released by the fighters told reporters that five girls had died. She did not provide other details and it was not immediately possible to independently verify her claim.

The abductions in Dapchi have evoked painful memories of the tragedy in Chibok, where 276 girls were kidnapped from their boarding school. Nearly four years later, about 100 of them have never returned home.

The Nigerian government denied that it had paid a ransom or made a prisoner swap in exchange for the girls’ freedom. The girls were released “through back-channel efforts and with the help of some friends of the country, and it was unconditional,” Information Minister Lai Mohammed told journalists in the capital, Abuja.

“No money changed hands. They only had one condition — that they will return them to where they took them. So in the early hours of today, they did return the girls and most of them went to their parents,” he said.

The girls were meeting with counselors at a nearby hospital, and “will be quarantined and be counseled before they go back to their schools,” he added. Nigeria’s government later said they were being taken to the capital on a military plane.

The fighters had rolled into Dapchi in nine vehicles and the girls were left in the center of town. As terrified residents emerged from their homes, the terrorists issued an ominous warning, resident Ba’ana Musa told the AP.

“We did it out of pity. And don’t ever put your daughters in school again,” the residents said the terrorists told them. Boko Haram means “Western education is forbidden” in the Hausa language.

Nigeria’s government said 104 of the 110 schoolgirls had been confirmed freed.

The latest mass abduction is thought to have been carried out by a Boko Haram splinter group aligned with the Islamic State terrorist group that has criticized the leader of the main Boko Haram organization for targeting civilians and has focused instead on military and Western targets.

The release came a day after an Amnesty International report accused the Nigerian military of failing to heed several warnings of an imminent attack on Feb. 19 during which the girls were seized. The military has called the report an “outright falsehood.”

Wednesday’s miraculous development also brought renewed focus to the 100 Chibok girls still missing since April 2014. Coincidentally, some of the Chibok families had already made plans to travel to Dapchi that day to lend their moral support before it was known that most of the girls had been released.

Some of the Chibok families instead joined in rejoicing with the Dapchi parents, said Lawan Zannah, secretary of the Chibok parents’ association.

“This development gives us light that … we can take a message to our other colleagues at home that yes, what we have seen will give us hope that our own (girls) too will be released,” Zannah said.