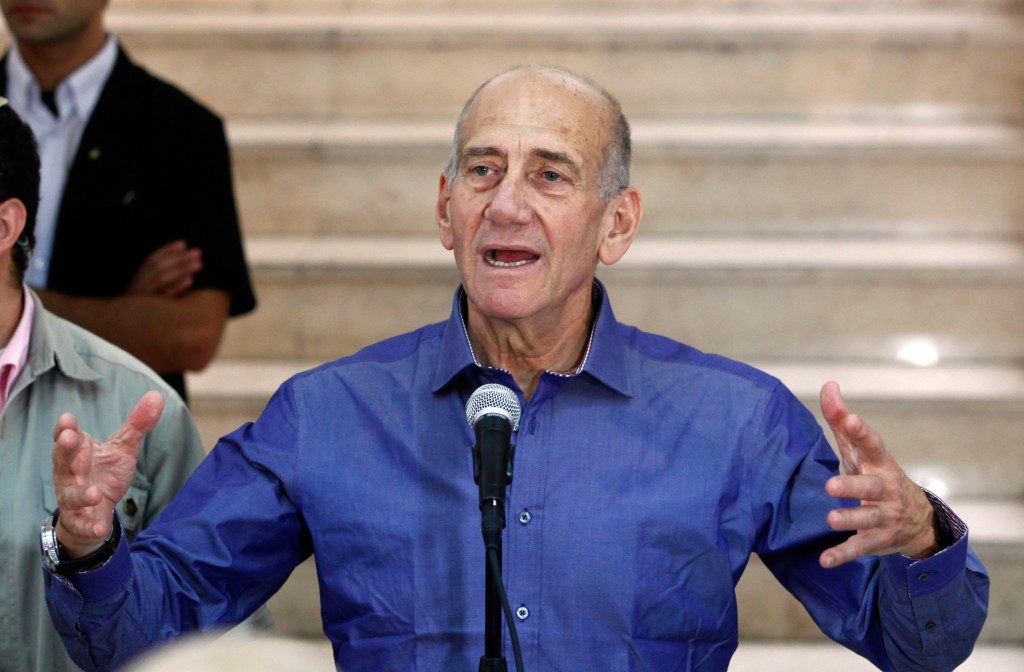 Former prime minister Ehud Olmert used his time in prison to write his life story. The finished product is an autobiography titled B’guf Rishon (“In First Person”) which has just been released.

As expected, Olmert is overly kind to himself and overly hard on his political rivals. When it comes to the corruption charges that made him the first prime minister ever to do prison time, he writes, “I ask myself again and again if all of this was necessary, whether it was unavoidable. Did I err so fundamentally at any stage in my public career that I invited this major downfall on myself from the most coveted position in public life, to become a prisoner?”

His words reflect an obvious denial of reality. Of course it was avoidable. He could have refused to take bribes, and then he would have been spared the “major downfall” from prime minister to prisoner.

It’s also ironic that a person who did time for corruption, and who was known to enjoy gifts of fine cigars and expensive pens, would lambaste the current prime minister for his extravagant lifestyle. “The waste, the hedonism, the disregard for minimal standards of modesty and restraint cry to the heavens. And all of this is nothing compared to the disclosures over the gifts that the couple has received, [or] more accurately, over the gifts that the couple demanded of the rich people of the world.”

This from a person who took cash-stuffed envelopes?

He also settles scores with Ehud Barak, the coalition partner who forced Olmert’s resignation by threatening to quit and force new elections. He paints Barak, a former prime minister and defense minister, as a political failure desperate for help in salvaging his political career.

“In advance of the 2006 election, [Barak] asked to join Kadima. He approached [me], really begging that I include him on the [electoral] list, even in the 20th spot. It was clear that he was looking for a new base from which to try to take off. I considered his request, but it became clear to me that including him would hurt the new movement [Kadima] due to public opinion, which had not forgotten Barak’s amazing failure as prime minister.”

There’s no doubt that the 900-page tome has more than catty attacks on political rivals and transparent attempts at casting himself as a victim. He was prime minister during the Second Lebanon War, made unprecedented concessions to PA chairman Mahmoud Abbas and ordered some very bold military operations.

One episode that contains an important lesson for the future relates to an attempt to gain the release of IDF soldier Gilad Shalit, who was held in captivity in Gaza for five years.

Olmert revealed that in 2009, in his final days as prime minister, he received word that Hamas was prepared to make a deal to release Shalit. He dispatched Shin Bet head Yuval Diskin to Cairo to discuss a deal, but then Hamas suddenly pulled back.

What changed Hamas’ mind about cutting a deal for Shalit?

“There was a set protest tent outside the Prime Minister’s Office then, with members of the Shalit family and their supporters demanding the release of the soldier,” Olmert recalled.

“Diskin was in Cairo, and [then-Defense Minister Ehud] Barak meanwhile went into the Shalit protest tent. Then, all of a sudden, the Shin Bet called me up and said that Hamas had decided not to make a deal. I asked why, and they said that they had ‘definite information’ that Hamas said that if Barak went to the protest tent that meant Israel was under pressure to free Shalit, and if that was the case they could demand more, and so they backed away from the deal. I blame him for irresponsible behavior that caused the deal to fall through.”

It’s pretty safe to assume that a deal in 2009 would have cost Israel a lot less than the deal that was reached two years later, and which resulted in the release of some 1,100 terrorists. “We were forced to release the worst murderers,” Olmert wrote. “I would never have made such a deal.”

But what we do know is that Israel’s enemies are cruel, and that they take advantage of what they perceive to be weakness. When the defense minister visited the protest tent out of sympathy for the parents of the kidnapped soldier, he did the family and the soldier a disservice in that it convinced Hamas to hold out for a better deal, possibly prolonging Shalit’s captivity for another two years.

Moreover, all of Israel is paying the price for the deal that was ultimately reached. Sixty-three percent of the terrorists who were released returned to their old ways. They have been responsible for many, many deaths, including the kidnapping and killing of the three youths, Hy”d, which led to Operation Protective Edge in Gaza.

The lesson is that those at the head of Israel’s government must see the big picture and act in a way that advances the interests of both the family and the country.