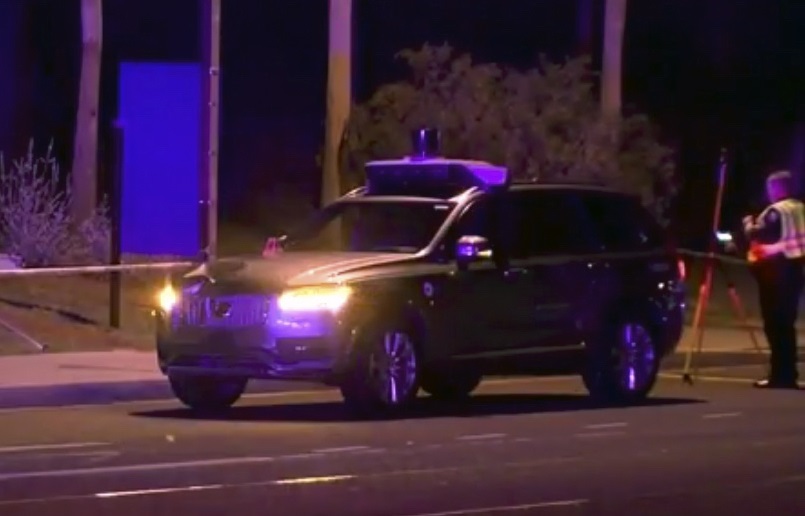 Uber Technologies Inc. halted autonomous vehicle tests after one of its cars struck and killed a woman in Tempe, Arizona, in what is likely the first pedestrian fatality involving the technology.

The 49-year-old woman, Elaine Herzberg, was crossing the road outside of a crosswalk when the Uber vehicle operating in autonomous mode under the supervision of a human safety driver, struck her, according to the Tempe Police Department. She was transferred to a local hospital where she died from her injuries. “Uber is assisting and this is still an active investigation,” Liliana Duran, a Tempe police spokeswoman, said in an emailed statement.

Uber said on Monday that it was pausing tests of all its autonomous vehicles in Pittsburgh, San Francisco, Toronto and the greater Phoenix area. “Our hearts go out to the victim’s family,” a company spokeswoman said in a statement. “We are fully cooperating with local authorities in their investigation of this incident.”

As many self-driving cars have begun to travel on public roads in pilot programs around the world, the chance of a pedestrian death has become more likely. Experts have long worried about the impact deadly crashes could have on the nascent industry.

“We’re within the phase of autonomous vehicles where we’re still learning how good they are. Whenever you release a new technology there’s a whole bunch of unanticipated situations,” said Arun Sundararajan, a professor at New York University’s business school. “Despite the fact that humans are also prone to error, we have as a society many decades of understanding of those errors.”

The NTSB’s cautionary tone on the emergence of self-driving technology contrasted with the Department of Transportation, which revised its policy on self-driving vehicles Tuesday, in an attempt to remove obstacles to the testing of such vehicles.

“As always, we want the facts, but based on what is being reported this is exactly what we have been concerned about and what could happen if you test self-driving vehicles on city streets,” said Jason Levine, executive director of the Center for Auto Safety, a Washington-based advocacy group. “It will set consumer confidence in the technology back years if not decades. We need to slow down.”

The Phoenix area is a fertile ground for experiments in the technology. Uber has been testing there with safety drivers behind the wheel. Late last year, Alphabet Inc.’s Waymo, which has tested in the Phoenix area for years, began removing the safety drivers to transport a small number of residents. (Waymo staff sit in the back seat.) General Motors is also testing in the Phoenix area. A GM spokesman declined to comment, and a representative from Waymo did not return multiple requests for comment.

“Public safety is our top priority, and we are in communication with law enforcement, which is investigating the accident and gathering facts, as well as Uber,” a spokesman for Arizona Governor Doug Ducey said.

Drivers relying on Tesla’s Autopilot technology have been involved in fatal car crashes. Uber has had minor incidents in the past. A self-driving Uber car ran a red light in San Francisco while the company operated in the city without regulatory approval. The California Department of Motor Vehicles eventually forced Uber to pull the cars from the road.