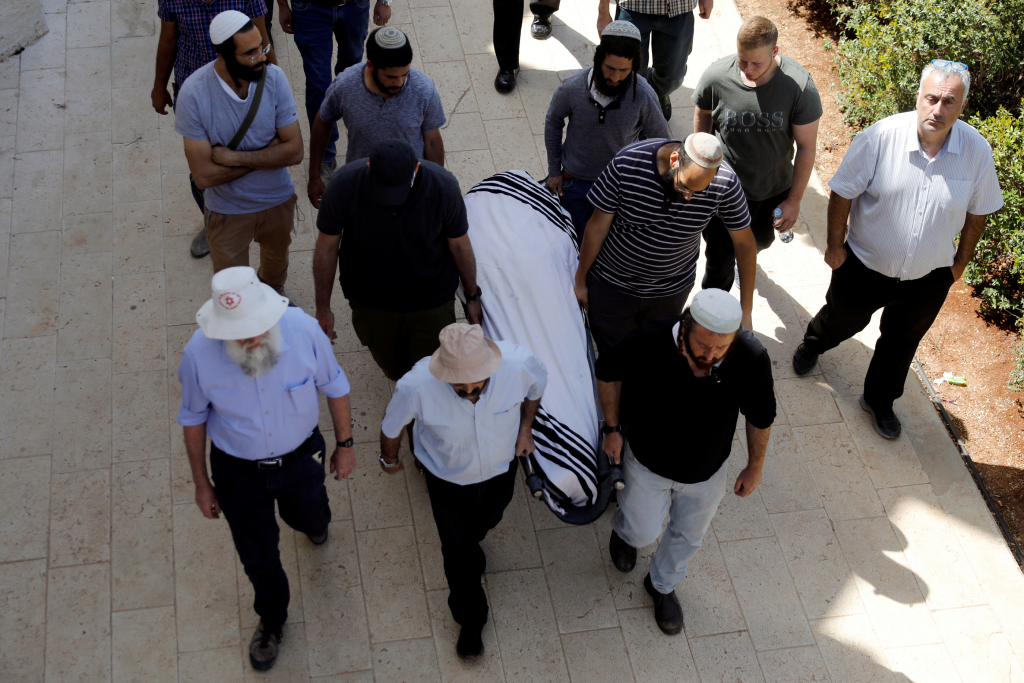 Hundreds of grieving family, friends and government officials gathered on Monday in the small community of Kochav Hashachar in the Binyamin region for the levayah of Adiel Coleman, Hy”d, who was murdered by a Palestinian terrorist in Yerushalayim’s Old City the day before.

In a heartbreaking hesped, Adiel’s mother Yael, tbl”c, said: “We would like more. Everything good we want more. To enjoy your pleasantness — more. But no. G-d gives and G-d takes away. This was your time.”

“But the children will miss you,” she said.

“The children!” she cried out, breaking down in tears along with many in the crowd.

Standing next to one of her daughters, his mother said that her wedding will take place in a month. “They will not beat us. Last night we decided that we would continue,” she said.

Ephraim Cohen remembered his son-in-law as a “mentch” and compared him to a korban olah, brought for Pesach.

“You were ascending from the City of David (when you were killed) and now too, you ascend there as a burnt offering,” he said.

“Tell G-d, ‘Enough!’ ” she said addressing her late brother. “It does not suit the Coleman family to be a bereaved family… Let us all demand redemption.”

In an interview on Army Radio, his brother Meir Coleman said: “This is here an incident that tells our story as a people, they came and killed a lovely man — we must not forget that we are at war with them,” he said.

Initial reports of the killing identified Coleman as a security guard, but friends later said he had worked in the archaeological digs in the City of David for the last five years, The Times of Israel reported.

The 32-year-old father of four was eulogized as well by Agriculture Minister Uri Ariel and Yerushalayim Mayor Nir Barkat.

“Our revenge is settlement and holding tight to the land,” said Ariel. “I hope we’ll continue to advance construction in Yerushalayim and Yehudah and Shomron and make a clear decision that between the Jordan [River] and [Mediterannean] Sea there will only be one sovereign state — the State of Israel.”

“This land is ours. We received it from G-d, blessed is He,” added the Jewish Home party minister.

Barkat said: “Yesterday they succeeded in harming Adiel. The sorrow is deep and difficult but they’ll never succeed in removing us from our path. We are determined…to continue to build in Yerushalayim and in the Land of Israel.”