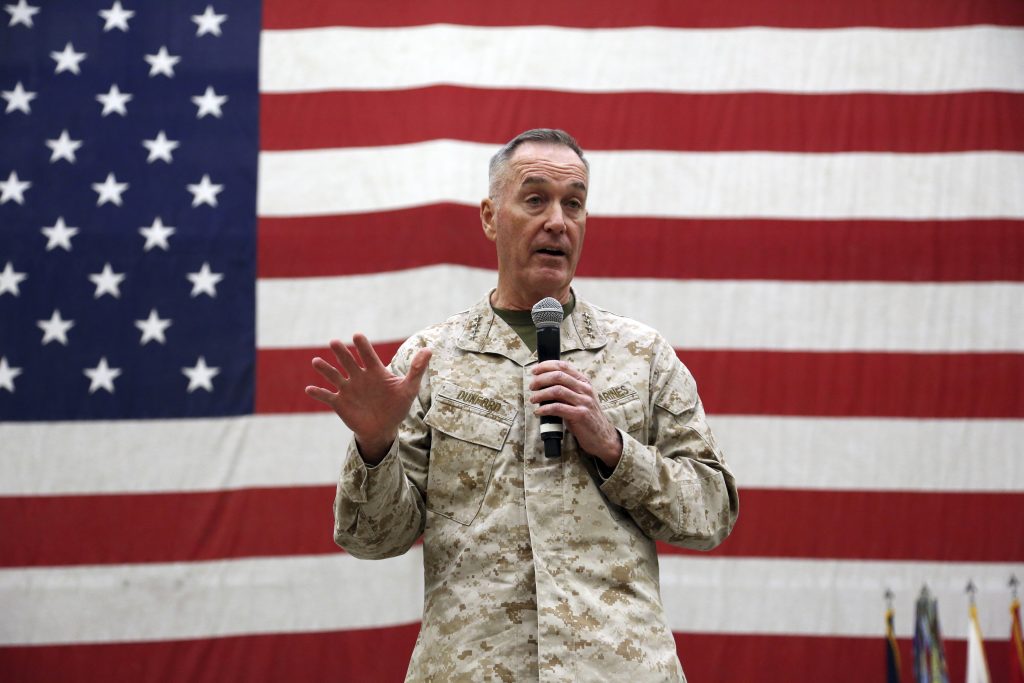 The top U.S. military officer visited Afghanistan on Monday to evaluate the military campaign and ensure new American advisory teams and an upgraded Afghan Air Force are on target as the next fighting season with the Taliban looms.

Gen. Joseph Dunford, chairman of the Joint Chiefs of Staff, said he wants to understand the goals for the coming months so the U.S.-led coalition can develop ways to measure progress in the fight.

Dunford told reporters traveling with him that he seeks “a discussion about measures of effectiveness.” A key question, Dunford said, is how the U.S. will know that it’s where it needs to be in implementing what is, in actuality, the Afghans’ plan.

The idea of benchmarks for progress in the Afghan war has been simmering for several months as the Pentagon looks to end America’s longest war. Measuring success will be a key part of White House discussions this summer when President Donald Trump looks for a one-year assessment of his new regional strategy. Last August, a reluctant Pres. Trump had to be persuaded to inject new U.S. troops to the conflict, which is now in its 17th year.

“The intent really is to get my own assessment of what we can expect over the next couple months,” said Dunford, who commanded U.S. and coalition forces in Afghanistan from February 2013 to August 2014. He said a major focus will be ensuring Gen. John Nicholson, the top U.S. commander in Afghanistan, has the resources he needs.

Dunford’s visit comes on the heels of a two-day stop in Afghanistan last week by Defense Secretary Jim Mattis amid talk of a renewed push to get Taliban fighters to the peace table with the Afghan government. The increased U.S. military campaign is seen as part of that effort. It includes hundreds of additional Army trainers and advisers who will work with Afghan troops closer to the fight, with the goal of turning the corner on what has been a stubborn stalemate with the Taliban and other insurgent groups.

About five weeks ago, the Army’s new training brigade deployed to Afghanistan with about 1,000 soldiers. It included close to 600 trainers and advisers and hundreds of security forces and other support personnel. The so-called Security Force Assistance Brigade is part of the broad new strategy that has pushed the Afghan conflict back to the top of the Pentagon’s warfighting priority list.

In addition to troops, the U.S. has also sent more intelligence and surveillance aircraft, A-10 attack planes, and combat search and rescue aircraft to the fight. Many of those resources have been shifted from Iraq and Syria, where the battle against Islamic State group terrorists is waning. The U.S. also is providing more fighter aircraft and other support to the Afghan Air Force, while increasing the number of American forces on the ground to more than 14,000.

The growth in the Afghan Air Force has long been a goal but has come along slowly. Dunford said he wants to hear from U.S. and Afghan leaders that the introduction of the aircraft and the needed maintenance and other support is on the right path.

Dunford was last in Afghanistan in December before the additional troops and aircraft arrived.