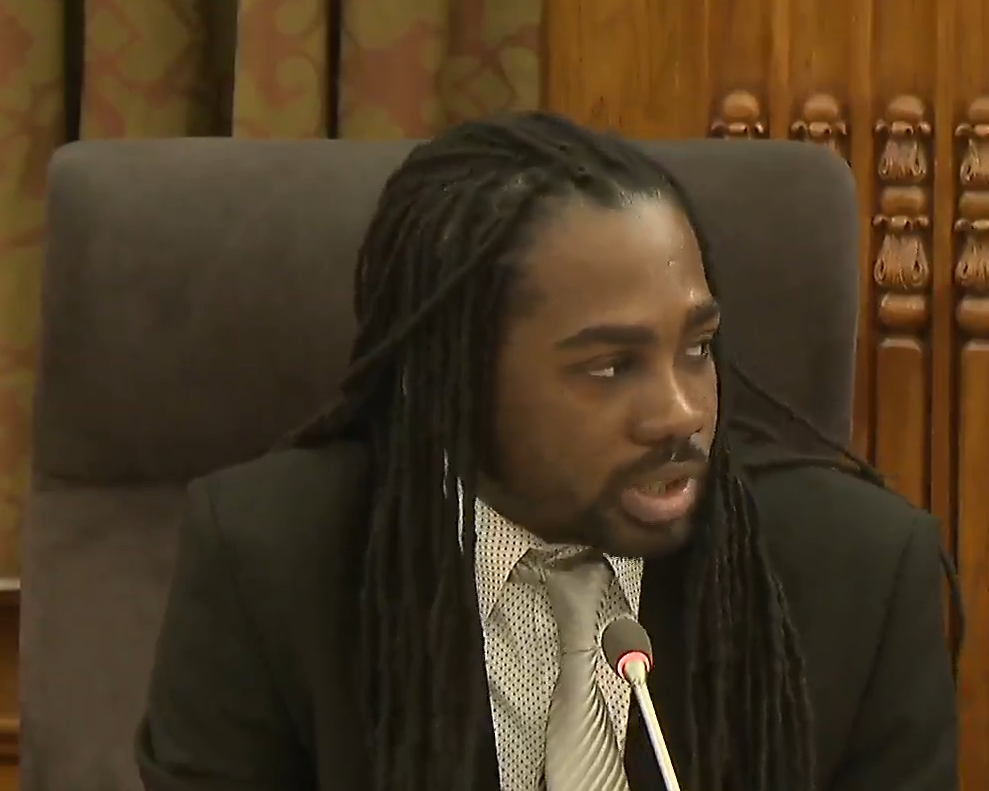 A D.C. lawmaker responded to a brief snowfall Friday by publishing a video in which he espoused a conspiracy theory that Jewish financiers control the weather.

D.C. Council member Trayon White Sr., D-Ward 8, posted the video to his official social media at 7:21 a.m. as snow flurries were hitting the nation’s capital. The video, shot through the windshield of a car driving west on Interstate 695 through downtown Washington, shows snowy skies while White narrates.

“Man, it just started snowing out of nowhere this morning, man. Y’all better pay attention to this climate control, man, this climate manipulation,” he says. “And D.C. keep talking about, ‘We a resilient city.’ And that’s a model based off the Rothschilds controlling the climate to create natural disasters they can pay for to own the cities, man. Be careful.”

The Rothschilds are a famous European business dynasty descended from Mayer Anschel Rothschild, an 18th-century Jewish banker who lived in what is today Frankfurt, Germany. The family has repeatedly been subject over the years to anti-Semitic conspiracy theories alleging that they and other Jews clandestinely manipulate world events for their advantage.

The Anti-Defamation League reported last month that anti-Semitic incidents in the District of Columbia more than doubled in 2017, compared with 2015. That follows a similar escalation nationwide.

White did not return calls for comment. In a series of text messages, he confirmed the voice in the video is his but expressed surprise that his remarks might be construed as anti-Semitic. Asked to clarify what he meant, he wrote, “The video says what it says.”

However, about four hours after The Washington Post published this story online Sunday, White sent a statement of apology via text message.

“I work hard every day to combat racism and prejudices of all kinds. I want to apologize to the Jewish Community and anyone I have offended,” he said. “The Jewish community have been allies with me in my journey to help people. I did not intend to be anti-Semitic, and I see I should not have said that after learning from my colleagues.”

White said his “friends” at Jews United for Justice, a group that advocates for progressive causes and endorsed him in 2016, were “helping me to understand the history of comments made against Jews and I am committed to figuring out ways (to) continue to be allies with them and others.”

D.C. Council member Brianne K. Nadeau, D-Ward 1, who is Jewish, released a statement Sunday night saying White had apologized and “expressed his sincere regret . . . for having offended members of the Jewish community.”

She added: “It is my sincere hope that my colleague has learned from this experience, and that together we can serve the diverse people of the District of Columbia with a focus on lifting each other up, rather than tearing one another down.”

White’s video statements appear to echo beliefs, found lurking in corners of the internet, that the Rockefeller Foundation’s Resilient Cities initiative – which provides grants to cities, including D.C., to address environmental and economic problems – is actually part of a secret scheme to control and reduce the population of North America.

Some conspiracy theorists also think the Rothschilds, acting in conjunction with the Rockefeller family, have technology to manipulate the weather – for example, by causing freak storms that wreak havoc on people, farms and livestock.

In a video posted to social media internet commentator Deborah Tavares – a Northern California resident who argues, among other things, that climate change and wireless electricity meters are tools in a plot of global domination – calls the Resilient Cities program a “diabolical” effort to manipulate people.

“This a genocide program,” she says. “We are being moved now into what they call ‘resilient cities.’ And it’s important to get this word out, start looking it up: Resilient cities. Understand what this is: This is a plan brought in by Rothschild and Rockefeller.”

She adds, “We’re being categorized as lunatics, but we know that the weather is massively and completely, artificially controlled.”

Conspiracy theories alleging nefarious plots by elites such as the Rothschilds and Rockefellers – as well as other boogeymen such as the illuminati and Freemasons – have increasingly bobbed to the surface of American politics in recent years.

The Republican Party’s 2012 platform embraced what had previously been fringe fears of a 1992 United Nations environmental accord known as Agenda 21, stating that it was “erosive of American sovereignty.” Assertions that the pact was cover for a global plot had become popular among tea party groups battling local, state and federal environmental regulations.