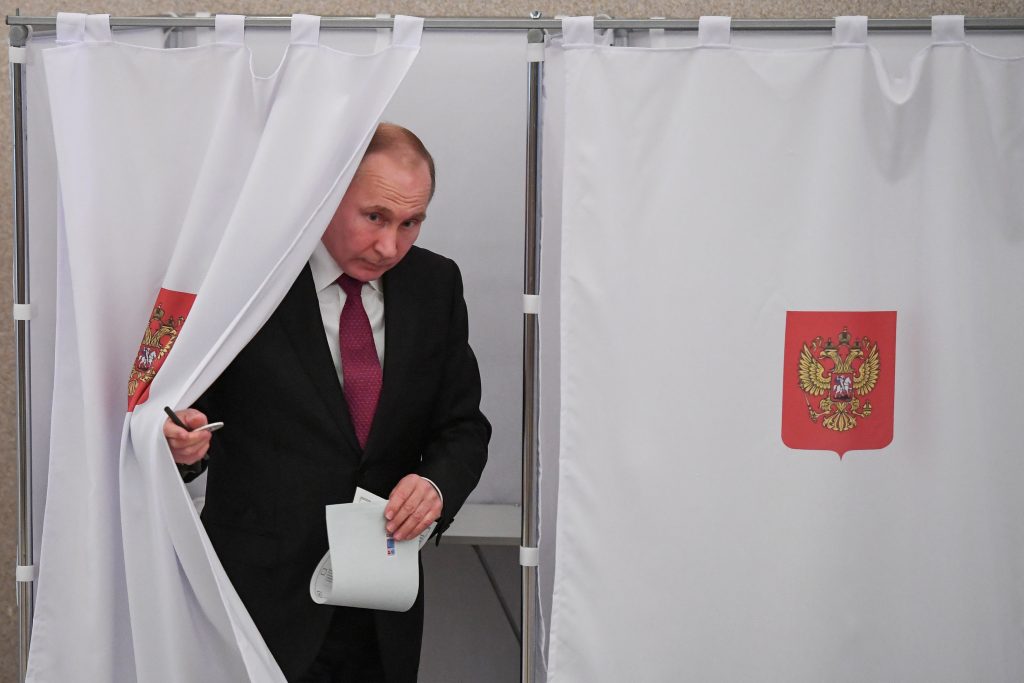 A look at some of the significant dates in Vladimir Putin’s 18 years in power as Russia’s president and prime minister:

Dec. 31, 1999 — In a surprise address to the nation, President Boris Yeltsin announces his resignation and makes Putin, the prime minister he appointed four months earlier, the acting president.

May 7, 2000 — After winning the election with about 53 percent of the vote, Putin is inaugurated for his first four-year term.

May 11, 2000 — Tax police raid the offices of NTV, a popular independent channel noted for critical coverage of the Kremlin. It is the first salvo in moves against prominent independent media that have characterized the Putin era.

Aug. 12, 2000 — The Kursk submarine sinks with 118 people aboard, setting off the first widespread and sustained criticism of Putin. News media take him to task for remaining on vacation during the early period of the crisis and waiting five days before accepting Western offers of help.

Oct. 23, 2002 — Chechen terrorists take some 850 people hostage at a Moscow theater. Three days later, Russian special forces pump an unidentified gas into the theater to end the crisis, killing at least 130 hostages along with the terrorists. Putin defends the operation as having saved hundreds of lives.

Oct. 25, 2003 — Russia’s richest man, oil tycoon Mikhail Khodorkovsky, is arrested. Khodorkovsky was seen as a potential challenger to Putin. Khodorkovsky is later sentenced to 10 years in prison for tax evasion and fraud and his Yukos oil company dismantled, most of it acquired by state oil company Rosneft.

Sept. 1, 2004 — Islamic terrorists seize a school in Beslan. More than 300 people die in the chaotic explosions and shootout that end the siege two days later. Putin blames regional leaders’ incompetence and announces that governors will be appointed figures rather than elected.

April 25, 2005 — Putin alarms international observers by describing the collapse of the Soviet Union as “the greatest geopolitical catastrophe of the century.” Although Putin referred to the economic chaos and ethnic conflicts that followed the collapse, the statement is seen by many as revealing a neo-Soviet mindset.

Feb. 10, 2007 — In a speech at a conference in Munich, Putin turns away radically from earlier attempts to develop closer ties with the United States.

May 8, 2008 — Barred by the constitution from running for a third consecutive term, Putin is appointed prime minister by new President Dmitry Medvedev. He effectively remains the country’s political leader.

Sept. 24, 2011 — Medvedev calls for Putin to be nominated for a third term as president.

March 4, 2012 — Putin is elected to a new presidential term, which is now six years long. Protests by tens of thousands before the election and on the eve of his inauguration lead to legislation harshening penalties for unauthorized political protests.

March 18, 2014 — Russia annexes Crimea from Ukraine, after the Kremlin sends in troops without insignia following the ouster of Ukraine’s Russia-friendly president and stages a quick referendum on splitting from Ukraine. Although Russia denied involvement at the time, Putin admits a year later that he planned the annexation weeks previously, taking advantage of Ukraine’s political chaos.

April 2014 — Fighting between Ukrainian forces and Russia-backed separatist rebels begins in eastern Ukraine, starting a war that has killed more than 10,000 people to date. Russia denies its troops are involved.

July 17, 2014 — A Malaysian airliner is shot down over Ukraine, killing all 283 aboard. Russia promotes several theories, but other investigators point to a Russian mobile missile-launcher.

Feb. 27, 2015 — Boris Nemtsov, a top figure of Russia’s beleaguered political opposition, is gunned down on a bridge a few hundred meters from the Kremlin. Nemtsov was working on a report about Russian soldiers in eastern Ukraine.

July 7, 2017 — Putin and President Donald Trump meet for the first time. Putin says he believes Trump accepted his denial of allegations that Russians meddled in the election that brought Trump to power.

March 4,  2018 — Former Russian agent Sergei Skripal, 66, and his daughter Yulia, 33, were found slumped unconscious on a bench outside a shopping center in the southern English city of Salisbury. They have been in critical condition in hospital ever since. Britain pinned the blame on Russia and gave 23 Russian diplomats at the London embassy a week to leave.

Russia has denied any involvement and has accused London of whipping up anti-Russian hysteria, and announced it is expelling 23 British diplomats and threatened further retaliatory measures.