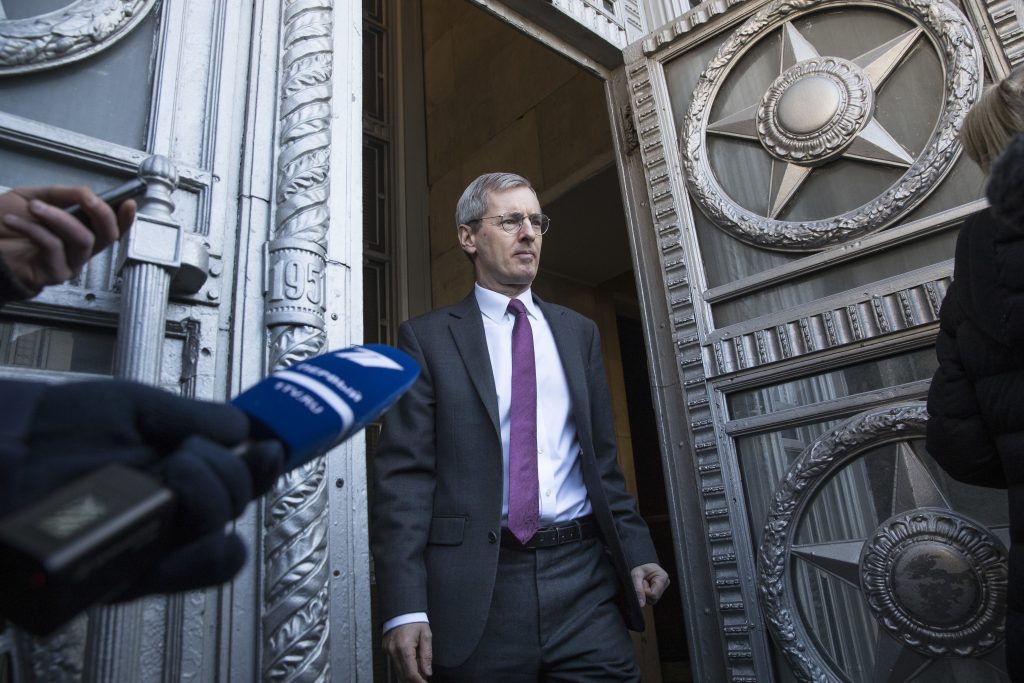 Russia on Saturday announced it is expelling 23 British diplomats and threatened further retaliatory measures in a growing diplomatic dispute over a nerve-agent attack on a former spy in Britain.

Britain’s government said the move was expected, and that it doesn’t change their conviction that Russia was behind the poisoning of ex-agent Sergei Skripal and his daughter in the English city of Salisbury. Prime Minister Theresa May said Britain will consider further retaliatory steps in the coming days alongside its allies.

The Russian Foreign Ministry ordered the 23 diplomats to leave within a week. It also said it is ordering the closure in Russia of the British Council, a government-backed organization for cultural and scientific cooperation, and is ending an agreement to reopen the British consulate in St. Petersburg.

The announcement followed Britain’s order this week for 23 Russian diplomats to leave the U.K. because Russia was not cooperating in the case of the Skripals, who were found March 4 poisoned by a nerve agent that British officials say was developed in Russia. They remain in critical condition and a policeman who visited their home is in serious condition.

Britain’s Foreign Office said Saturday that “Russia’s response doesn’t change the facts of the matter — the attempted assassination of two people on British soil, for which there is no alternative conclusion other than that the Russian State was culpable.”

The British Council said it was “profoundly disappointed” at its pending closure. The organization has been operating in Russia since the 1991 fall of the Soviet Union.

“It is our view that when political or diplomatic relations become difficult, cultural relations and educational opportunities are vital to maintain ongoing dialogue between people and institutions,” it said.

Britain’s National Security Council will meet early next week to consider the next steps, May said.

The poisoning has plunged Britain and Russia into a war of recrimination and blame.

British Ambassador Laurie Bristow, who was summoned to the Foreign Ministry in Moscow on Saturday to be informed of the moves, said the poisoning was an attack on “the international rules-based system on which all countries, including Russia, depend for their safety and security.”

“This crisis has arisen as a result of an appalling attack in the United Kingdom, the attempted murder of two people, using a chemical weapon developed in Russia and not declared by Russia at the Organization for the Prohibition of Chemical Weapons, as Russia was and is obliged to do under the Chemical Weapons Convention,” he added.

“We have not raised any tensions in our relations, it was the decision by the British side without evidence,” he told The Associated Press.

Kosachev, who heads the foreign affairs committee in the upper house of the Russian parliament, said, “I believe sooner or later we will learn the truth and this truth will be definitely very unpleasant for the prime minister of the United Kingdom.”

Russian Foreign Ministry spokeswoman Maria Zakharova denied that Russia or the Soviet Union had ever developed Novichok, the class of nerve agent that Britain says was used to poison the Skripals.

But a Russian scientist disclosed details of a secret program to manufacture the military-grade nerve agents in the 1990s, and later published the formula.

Speaking to the Russia-24 news channel, Zakharova on Saturday linked Britain’s angry reaction to the war in Syria. She said Britain is taking a tough line because of frustration at recent advances of Russian-backed Syrian government forces against Western-backed rebels.

Russia argues it has turned the tide of the international fight against Islamic State terrorists by lending military backing to Syria’s government. With Russian help, Syrian forces have stepped up their offensive on rebel-held areas in recent days, leaving many dead.

The Czech Republic, Slovakia and Sweden on Saturday all rejected a suggestion by Zakharova that the nerve agent might have originated in their countries.

British police appealed Saturday for witnesses who can help investigators reconstruct the Skripals’ movements in the crucial hours before they were found unconscious. It is still not clear how the Skripals came in contact with the nerve agent.

New tensions have also surfaced over the death Monday of a London-based Russian businessman, Nikolai Glushkov. British police said Friday that he died from compression to the neck and opened a murder investigation.

British police said there is no apparent link between the attack on Glushkov and the poisoning of the Skripals, but both have raised alarm in the West at a time when Russia is increasingly assertive on the global stage and is facing investigations over alleged interference in the Donald Trump’s 2016 election as U.S. president.