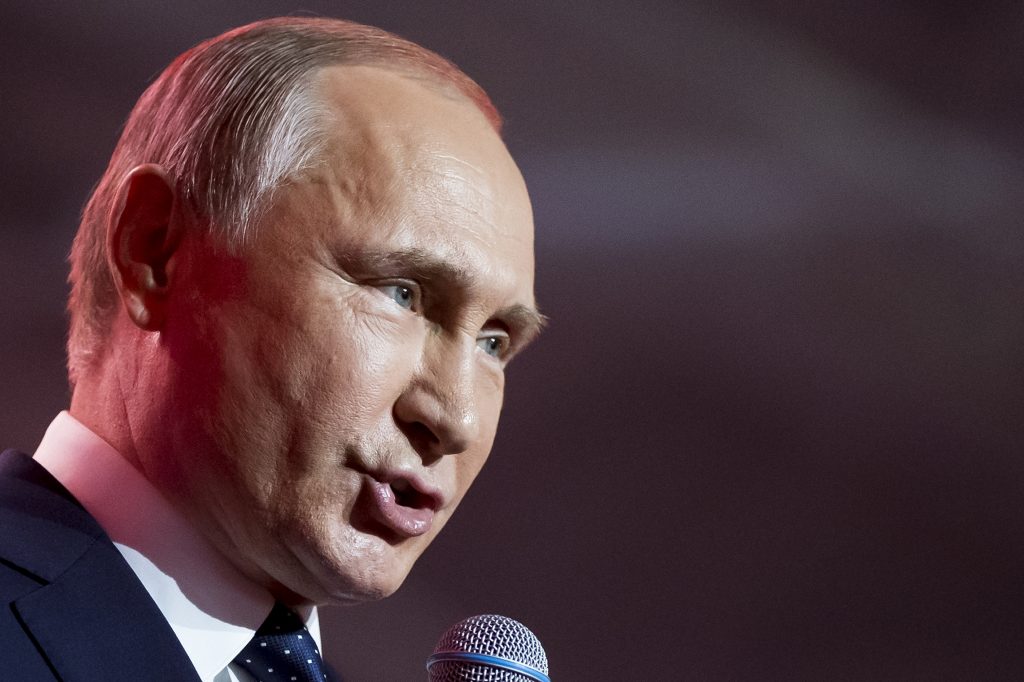 Vladimir Putin’s victory in Russia’s presidential election Sunday isn’t in doubt. The only real question is whether voters will turn out in big enough numbers to hand him a convincing mandate for his fourth term — and many Russian workers are facing intense pressure to do so.

Polls opened at 8 a.m. Sunday in Russia’s Far East regions of Chukotka and Kamchatka. Voting will conclude at 8 p.m. (1800 GMT; 2 p.m. EDT) in Kaliningrad, the Baltic exclave that is Russia’s westernmost region.

Putin is so certain of winning that authorities are investing instead in massive get-out-the-vote efforts to produce a turnout that would embolden the Russian leader both domestically and internationally.

Yevgeny Roizman, the mayor of Russia’s fourth-largest city Yekaterinburg, says local officials and state employees have all received orders “from higher up” to make sure the presidential vote turnout is over 60 percent.

“They are using everything: schools, kindergartens, hospitals — the battle for the turnout is unprecedented,” said Roizman, one of the rare opposition politicians to hold a significant elected office.

A doctor at one of the city’s hospitals told The Associated Press how one kind of voting pressure works.

The doctor, who gave her name only as Yekaterina because of fears about repercussions, said she and her co-workers were told to fill out forms detailing not only where they would cast their ballots, but giving the names and details of two “allies” whom they promise to persuade to go vote.

“It’s not something you can argue about,” she said at a cafe Saturday. “People were indignant at first, said ‘They’re violating our rights’ … but what can you do?”

Yekaterina said she isn’t sure what she’ll do with her ballot, musing that “maybe I’ll just write ‘Putin is a moron.'” But she clearly understands that not showing up at the polling place Sunday will not only endanger her job but will reflect badly on her boss, whom she likes.

The Russian doctor said she wouldn’t go to vote if she wasn’t forced to.

“What’s the point? We already know the outcome. This is just a circus show,” she said.

The eight presidential candidates were barred from campaigning Saturday, but the message to voters was clear from billboards celebrating Russian greatness — a big theme of Putin’s leadership — and Kremlin-friendly media coverage.

Putin urged Russians on Friday to “use their right to choose the future for the great Russia that we all love.”

While Putin has seven challengers, none is a real threat. The last time he faced voters in 2012, he faced a serious opposition movement, but since then he has boosted his popularity thanks to Russian actions in Ukraine and Syria.

More than 1,500 international observers are joining thousands of Russian observers to watch the vote. The government wants to ensure that this election is clean after ballot stuffing and fraud marred the last Russian presidential election in 2012.

A Russian election monitoring group said Saturday it has registered an “alarming” rise in recent days in complaints that employers are forcing or pressuring workers to vote.

Grigory Melkonyants, co-chair of the independent Golos center, told the AP on Saturday the group has also recorded smaller complaints, such as gimmicks like discounted potatoes for people who vote, or schools holding special performances on Election Day to lure parents to an onsite voting station.

He said his own group has come under increasing pressure as the election approached, and warned that independent observers may be targeted by some kind of “attack” on voting day. He didn’t elaborate.

Turnout-boosting efforts have been the most visible feature of the campaign — and all come from taxpayers’ pockets. In Moscow alone, authorities are spending 50 million rubles ($870,000) on balloons and festive decorations at polling stations.

In Moscow, first-time voters will be given free tickets for concerts featuring some of Russia’s most popular artists who have campaigned for Putin. For older voters, Moscow health authorities will be offering free cancer screenings at selected polling stations.

Election observers and local media have reported threats and coercion of voters to re-register at their place of work and report later that they have voted.

Ella Pamfilova, chairwoman of the Central Election Commission who was appointed to clean up Russia’s electoral system, vowed to respond to complaints about being coerced to vote.

“No manager has the right to tell them where to vote,” she said recently

Voters in Russia’s Perm region said they were coming under pressure from their employers to vote Sunday — and to prove it. Messages were sent Friday to regional employees, warning that information about their voting habits would be submitted to management.

Putin has traveled across Russia, pledging to raise wages, pour more funds into the country’s crumbling health care and education and to modernize dilapidated infrastructure.

The presidential vote is set on the anniversary of Russia’s 2014 annexation of Crimea from Ukraine. Polls show that most Russians continue to see the takeover of that Black Sea peninsula as a major achievement despite subsequent Western sanctions.

Among Putin’s challengers is Ksenia Sobchak, a 36-year-old who has campaigned on a liberal platform and criticized Putin’s policies. Some see Sobchak, the daughter of Putin’s one-time patron, as a Kremlin project intended to add a democratic veneer to the vote and help split the ranks of Kremlin critics.

Putin’s main foe, opposition leader Alexei Navalny, was barred from the race because of a criminal conviction widely seen as politically motivated. Navalny has called for a boycott of the vote.