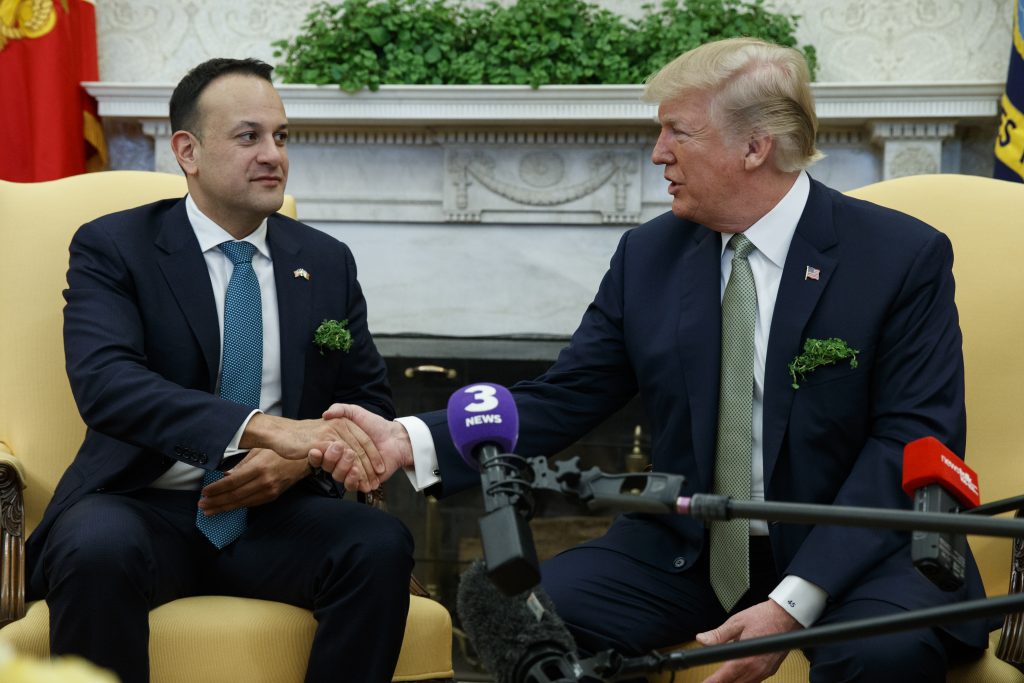 President Donald Trump stressed the close ties between Ireland and America at a luncheon Thursday, though he joked that the country was a “tough one to compete with” on taxes.

Mr. Trump appeared with Irish Prime Minister Leo Varadkar as part of a day of joint events marking the Irish holiday, including a one-on-one visit at the White House. Both leaders spoke at a luncheon at the U.S. Capitol with Republican House Speaker Paul Ryan.

After noting a number of famous Irish Americans, Mr. Trump said: “Whenever there’s a problem, you call, we’ll solve it.”

Amid laughter, he added: “Except for trade …They’ve got those taxes so low. You’re a tough one to compete with on the taxes.” Mr. Trump recently signed a massive tax cut into law, aimed at leveling the playing field with countries like Ireland that have low corporate taxes.

Varadkar, the recently elected Irish leader, or Taoiseach, said the two had a good meeting, noting that they spoke about Irish people living in the U.S. illegally, the negotiations over the border between Ireland and Northern Ireland and trade.

“I think we can have a new fair trade, free trade deal between Europe and America, and there’s no better man to make a deal than President Trump,” Varadkar said.

“The Guinness does taste better in Ireland but I realize this isn’t the year to bring up trade issues,” he said.

During a sit-down with Varadkar at the White House, Mr. Trump was asked if he would visit Ireland. The president said: “I will. I love it.” He offered no further details.

Mr. Trump said the two countries have an “outstanding relationship.”

“A tremendous number of Irish are living in New York, where I grew up, and they’re living in the United States,” said Mr. Trump, who also owns a golf club in Ireland. “And these are truly wonderful people.”

Mr. Trump was also pushed over whether he would visit the border between Ireland and Northern Ireland, a key unresolved issue in Brexit talks so far. He said that was “an interesting border also.”

In the evening, Varadkar was set to participate in the annual shamrock ceremony at the White House, presenting Trump with a bowl of Ireland’s famous greens.

The 39-year-old Varadkar is Ireland’s youngest prime minister. He’s the son of an Indian immigrant. He noted that he was in Washington years ago as a Congressional intern, but never saw the Oval Office.