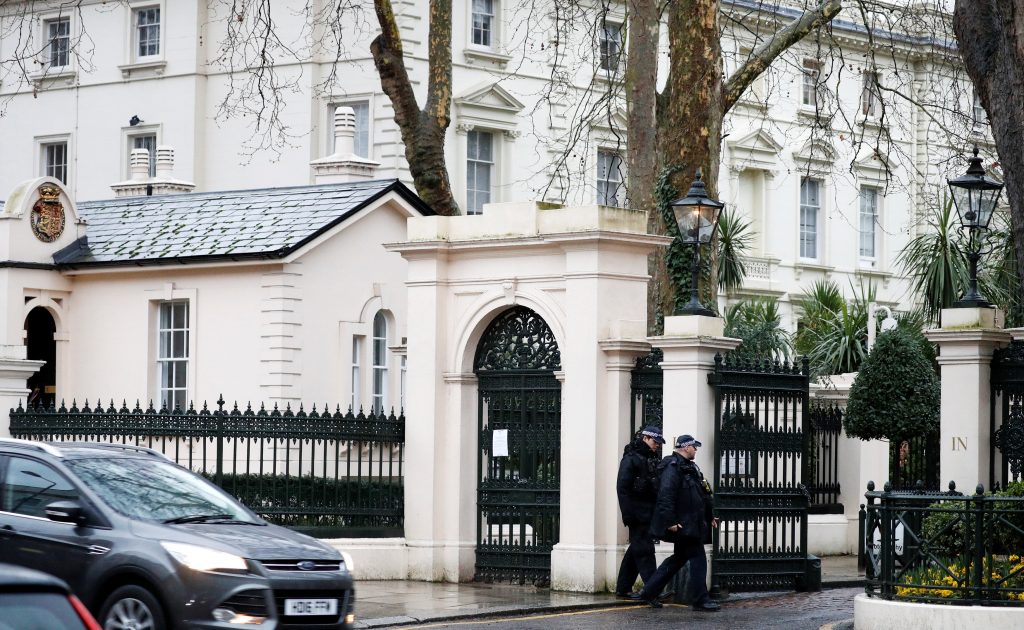 Russia said on Thursday it would retaliate very soon for Britain’s expulsion of 23 diplomats as Moscow and London traded public insults about a nerve toxin attack on a former Russian double agent in England.

After the first known use of a military-grade nerve toxin on British soil since World War II, the United States, France, NATO and the European Union gave verbal support to Prime Minister May, though it remained unclear what action the West would take.

London says the Russian state is responsible for trying to kill Sergei Skripal – a former Russian intelligence officer who betrayed dozens of agents to Britain’s MI6 – with Novichok, a lethal nerve agent developed by the Soviet military.

Russia denied any involvement and Foreign Minister Sergei Lavrov accused London of behaving in a “boorish” way, adding that this was partly due to the problems Britain faces over its planned exit from the European Union next year.

Lavrov said Russia’s response would come “very soon” but be conveyed to British officials first, an apparent contradiction of an earlier report by state news agency RIA that said Lavrov had promised to expel British diplomats.

In the biggest expulsion of Russian diplomats from London since the Cold War, Prime Minister Theresa May on Wednesday gave 23 Russians who she said were spies working under diplomatic cover a week to leave London.

“The temperature of Russian-British relations drops to minus 23 but we are not afraid of the cold weather,” Russia’s embassy in London said beside the picture of a thermometer surrounded by ice and reading minus 23 degrees Celsius.

Skripal and his daughter Yulia have been critically ill since they were found unconscious on a bench in the southern English city of Salisbury on March 4. A British policeman who was also poisoned is in a serious but stable condition.

PM May on Thursday visited the normally genteel city where police investigators in chemical protection suits and the army have been removing evidence of the poisoning.

Britain also said it would invest 48 million pounds ($67 million) in a new chemical warfare defense center at its Porton Down military research laboratory, where scientists identified the nerve agent used against Skripal.

The White House said it shared Britain’s assessment that Russia was responsible and supported the decision to expel Russian diplomats.

France, which on Wednesday had said it wanted proof of Russian involvement before deciding whether to take action against Moscow, swung behind Britain on Thursday.

“France agrees with the United Kingdom that there is no other plausible explanation and reiterates its solidarity with its ally,” President Emmanuel Macron’s office said in a statement.

Macron later told reporters he would decide in the coming days what measures France would take against Russia over the attack.

NATO Secretary-General Jens Stoltenberg said the attack in Britain was part of a pattern of reckless behavior from Russia over many years. He said Britain could count on NATO’s solidarity, but said there had been no request by London to activate the alliance’s mutual defense clause.

In London, Foreign Secretary Boris Johnson ratcheted up the rhetoric against Russia, accusing it of glorying in the attack on Skripal, which he described as a way of scaring anyone who stood up to President Vladimir Putin.

“There is something in the kind of smug, sarcastic response that we’ve heard from the Russians that to me betokens their fundamental guilt,” he told the BBC. “They want to simultaneously deny it and yet at the same time to glory in it.”

Johnson defended the government’s response to the attack against critics who said it did not go far enough. He suggested the authorities might also go after assets held in Britain by Russians close to Putin, though he gave no specific details.

His opposite number in Moscow, Lavrov, suggested that one possible motive for the poisoning was to complicate Russia’s hosting of this summer’s soccer World Cup.

Lavrov also said he hoped Skripal recovered from the attack so that he could shed light on what happened.

The diplomatic rift comes on the eve of a Russian presidential election on Sunday that is expected to extend Putin’s rule by a further six years. Putin, in power since 2000, casts himself as a strong leader who stands up to Russia’s enemies in the West.