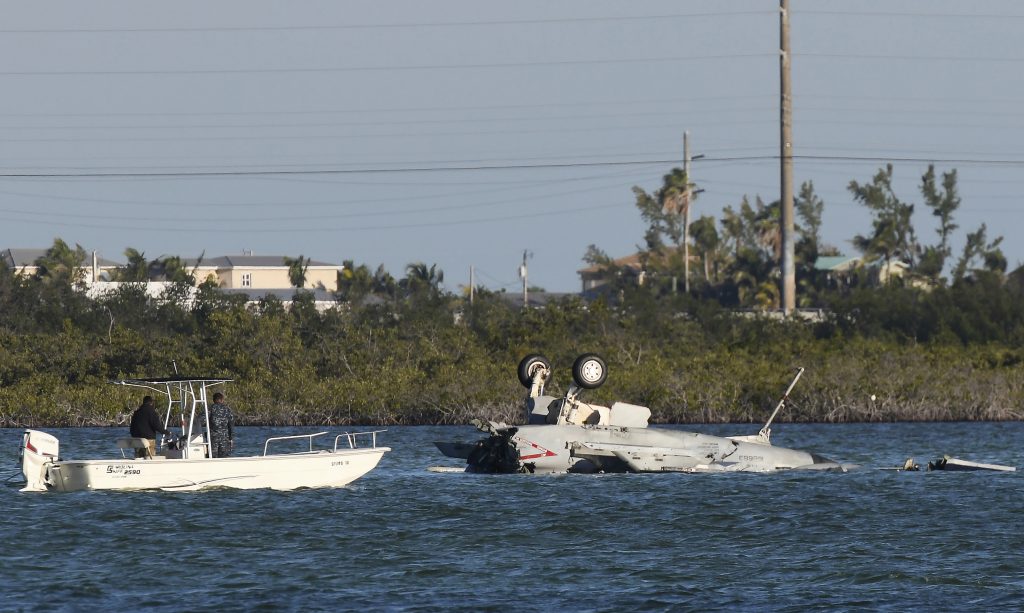 The Pentagon acknowledged Thursday that budget shortfalls have eroded military capabilities, including training and flight hours, but stopped short of blaming those cutbacks for the crash of a U.S. Navy fighter jet that killed both crew members.

Dana White, Pentagon spokeswoman, said the cause of the F/A-18 Super Hornet crash Wednesday off the coast of Key West, Florida, is still under investigation. But she was asked if there was a link between the crash and persistent military complaints about reductions in flying hours and other training cutbacks because Congress hasn’t approved the 2018 budget.

“It’s important that we not necessarily draw a direct correlation, but it is important that we have stable funding. That has been our message to the Congress and to the American people for the last several months,” said White. “Capabilities erode. And things are delayed.”

Marine Lt. Gen. Kenneth McKenzie, director of the Joint Staff, said military readiness is a key priority, but it’s not clear how it affected the aircraft or the deaths of the crew. He added, however, that “pilots are going to be flying more and training is going to pick up.”

The Super Hornet was on approach to land at the naval air station in Key West around 4:30 p.m. when it crashed into shallow water about a mile (1.5 kilometers) east of the runway.

Both the pilot and weapons-system officer ejected and were pulled out of the water. U.S. Naval Air Forces said late Wednesday that both had died. Their names are being withheld until 24 hours after families were notified, as is usual in cases of military deaths.

April Phillips, a spokeswoman for the Naval Safety Center in Norfolk, Virginia, said there have been 25 serious mishaps involving F/A-18 Super Hornets since fiscal year 2008. They resulted in four deaths – including the two Wednesday – and the loss of 11 aircraft. The other two fatalities were in 2011.

All 25 were considered “Class A,” which means a crew member died or the plane suffered at least $2 million in damage. There were five incidents last year, the most of any year in the past decade, and all remain under investigation. There was one mishap in 2016.

Phillips did not offer an explanation for the spike in serious mishaps in 2015, saying there wasn’t “a common cause” or “smoking gun.”

Navy Cdr. Dave Hecht, spokesman for Naval Air Force Atlantic, said the squadron took the day off from training Thursday in order to grieve. Other squadrons in Carrier Air Wing Eight were briefed on the mishap and then resumed normal training operations.

Barbie Wilson, who lives near Naval Air Station Key West, said she saw the crash from her pickup while running an errand.

“It looked like it was going to land on the runway and then the whole plane went sideways,” she said in a phone interview. “And then I saw fire and it dropped out of the sky.”

Wilson said her husband later told her he had heard two loud booms from their house nearby. She said the plane landed upside down in water that’s barely deep enough for a kayak.

“It was just a matter of minutes, and there were rescue helicopters,” she said. “You can’t get to it by boat or car.”

Justin Duane Hults, who also lives near the base, said the roar of the jet’s engines sounded abnormal right before the crash.

“They were coming in to land like they always do,” he said. “But (the engines) got real loud and then really quiet instead of (the roar) being long and drawn out.”

He said he later saw rescuers pull the crew from the water.

Hecht said the Super Hornet remains in the water where it crashed and will stay there until the investigation is complete. That investigation will include a review of aircraft maintenance, number of hours flown on the aircraft, physical condition of the aircrew and their activities previous to the accident.

The aircraft crew is based out of Naval Air Station Oceana, in Virginia Beach, Virginia. The Super Hornet is a twin-engine fighter jet that is larger than the single-seat F/A-18 Hornet.