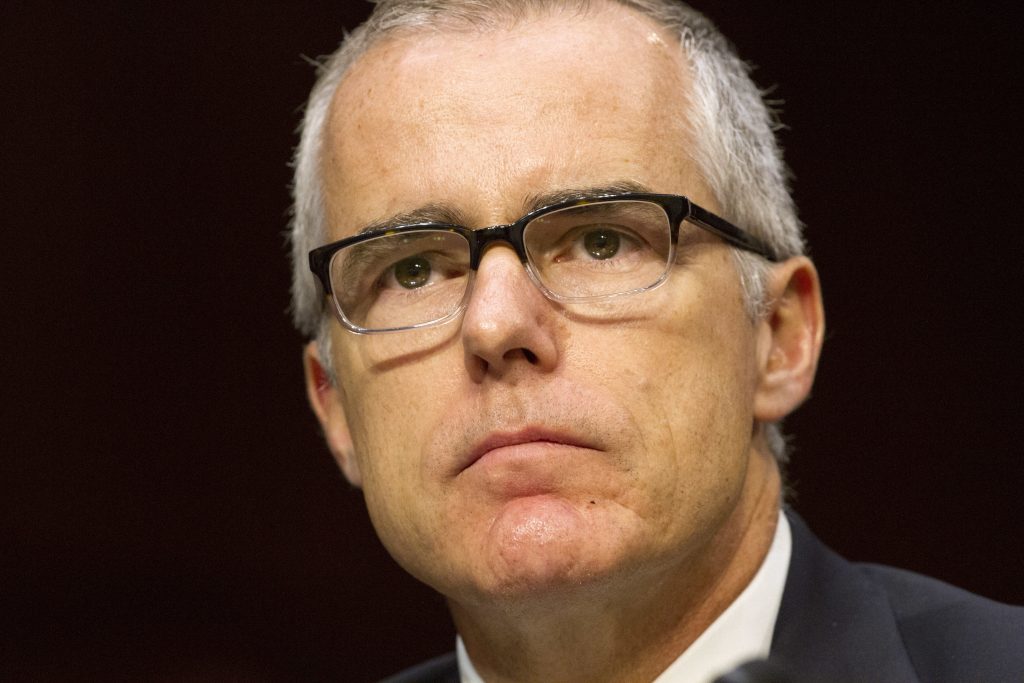 With his retirement slated for Sunday, former FBI Deputy Director Andrew McCabe pleaded for his job at the Justice Department on Thursday, hoping to forestall his firing.

Disciplinary officials at the FBI have recommended that Justice Department bosses fire McCabe, a frequent target of President Donald Trump’s criticism, ahead of his scheduled retirement. The termination, after more than 20 years on the job, could jeopardize his pension benefits.

McCabe was inside the Justice Department building with his lawyer to plead against the termination, according to a person familiar with the matter who spoke on condition of anonymity to discuss a private conversation.

An inspector general report that has not yet been released is expected to conclude that McCabe authorized FBI officials to speak with a Wall Street Journal reporter for an October 2016 story about differing views within the FBI and Justice Department on how aggressively the Clinton Foundation should be investigated. The report is also expected to allege that McCabe was not forthcoming with investigators with the inspector general’s office about that media leak, something McCabe denies.

McCabe, who joined the FBI in 1996, abruptly went on leave from his deputy director’s job in January. He served for several months as the bureau’s acting director following the firing last May of Director James Comey.

Trump has repeatedly singled out McCabe in arguing that FBI leadership is biased against him. He has pointed to campaign contributions that McCabe’s wife received during a failed run for the Virginia state Senate from the political action committee of then-Virginia Gov. Terry McAuliffe, a close Hillary Clinton ally.

White House spokeswoman Sarah Huckabee Sanders told reporters Thursday that the decision on whether McCabe should be fired was up to the Justice Department.

“But we do think that it is well documented that he has had some very troubling behavior and by most accounts a bad actor and should have some cause for concern,” she said. “But that would be a determination that DOJ would have to make.”

The inspector general’s office announced last year a wide-ranging investigation into the FBI’s handling of the Hillary Clinton email probe.

McCabe also has been under fire on Capitol Hill, where Republicans have suggested that Justice Department and FBI officials conspired in favor of Clinton and against Trump when it began an investigation into his ties to Russia.

On Thursday, Senate Judiciary Chairman Chuck Grassley, R-Iowa, and three other Republican senators called for a new special counsel to work with the inspector general in reviewing how the department handled the Russia probe before special counsel Robert Mueller was appointed in May 2017.

In a letter to Attorney General Jeff Sessions and Deputy Attorney General Rod Rosenstein, the senators wrote that a special counsel has stronger tools to compel testimony from witnesses who are not Justice Department employees. That could include McCabe, after his departure.

In addition to Grassley, Sens. Lindsey Graham of South Carolina, John Cornyn of Texas and Thom Tillis of North Carolina also signed on to the letter. All are members of the Judiciary committee.

Last week, Reps. Robert Goodlatte of Virginia and Trey Gowdy of South Carolina called for a new special counsel to take a broad look at whether Justice Department or FBI employees were biased as they began investigating Trump’s Russia ties and whether there were surveillance abuses during that probe.

Members of the House Judiciary panel have also called for a special counsel to look into the Clinton email investigation.