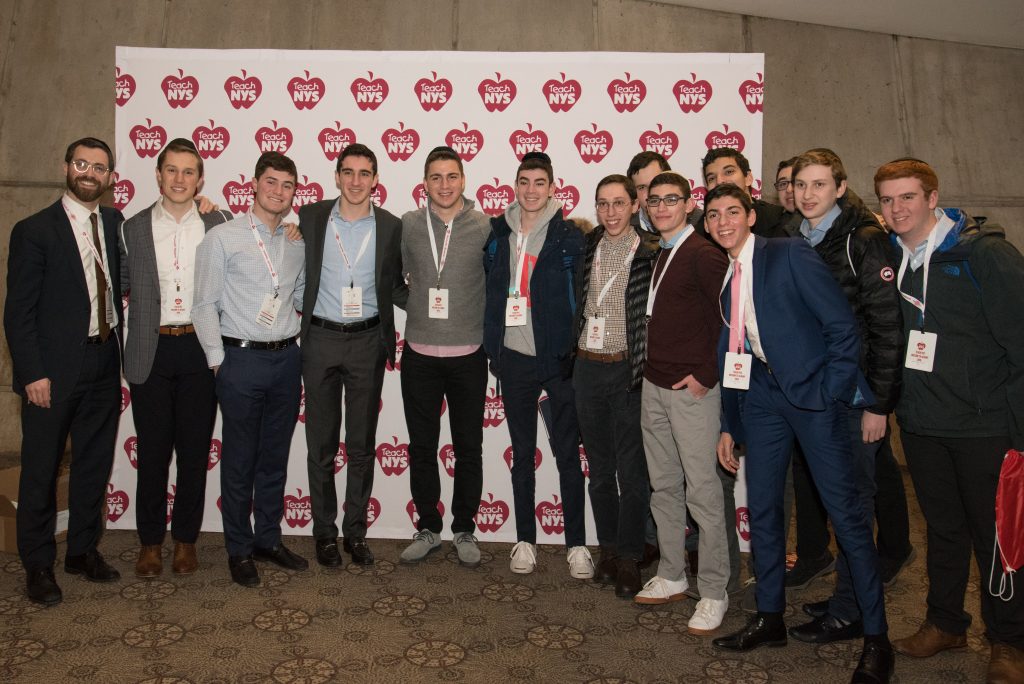 Teach NYS, a division of the Orthodox Union (OU) that advocates for governmental support for New York yeshivos, held its annual Mission to Albany on Tuesday to lobby lawmakers for increased support for nonpublic-school education.

“Today is about how you change the way state government thinks about education and our schools,” said OU Executive Vice President Allen Fagin. “Your right to choose how and where to be educated, without financial penalty or hardships, is a civil right that every parent and student in this state should enjoy.”

Yeshivah parents, many of whom have, k”ah, large families, are facing significant financial hardship from tuition bills, which can be well over $10,000 per child.

But the past few years have been cause for some optimism, noted Fagin: The $300-million figure represents a more than 100 percent increase in total state expenditures on private schools from just three years ago. And, largely thanks to the efforts of Teach NYS, last year New York budgeted $5 million toward Science, Technology, Engineering and Math (STEM) funding in private schools.

Though the $5 million may seem a pittance – less than a rounding error in a state budget that topped $150 billion; and its use has strict conditions – only to pay salaries for STEM teachers who have, or are on track for, a Master’s degree – this funding is seen by private-school advocates as a way to open the door to expanded state funding, even when the political climate will currently not allow for full-fledged tuition vouchers.

In addition to the STEM funding, yeshivah advocates are seeking increased funding for private-school security. The state budget currently provides $15 million for this item, in addition to a one-time, $25-million grant that Gov. Andrew Cuomo approved last year following a spate of bomb threats at Jewish institutions nationwide.

“We live in a crazy world,” said Rabbi Baruch Rothman, Director of Institutional Advancement at Yeshiva Darchei Torah in Far Rockaway, who has been participating in Teach NYS Albany Missions for the past decade. “There is nothing more important than making sure our children are safe.”

Gov. Cuomo’s budget proposal for the fiscal year 2019 – totaling around $168 billion, including a projected deficit of around $4.5 billion – does not renew the $25-million grant, nor does it expand the $5 million STEM allotment.

Sen. Catharine Young, Chairwoman of the Senate Finance Committee, addressed the Teach NYS Mission, and said that she is working on increasing the STEM funding.

Furthermore, Assemblyman Walter Mosley said that spending money on STEM education is vital not only for the students themselves, but for the country.

“As the United States continues to lag behind countries like Taiwan, the U.K. and Vietnam when it comes to math and science, if we’re going to continue to move forward as a workforce, that has to be our number-one priority, to invest in you.”

Assemblywoman Carmen de la Rosa, herself a parochial-school graduate, said that the state should participate in the education of all students, regardless of whether they choose to go to a public or private school.

“New York state is responsible for educating our students, and there shouldn’t be blinders as to who gets quality education and who doesn’t,” said de la Rosa. “It is our responsibility to educate all students in New York state.

Likewise, Assemblyman David Weprin said that an elected official supporting private schools does not mean that he or she is opposed to public schools.

Moreover, by sending their children to private schools, parents are actually relieving the public school system, said Weprin. If all children used public education, the “schools would be overwhelmed.”

Ultimately, said Weprin, “we have to advocate for all schools,” but that the advocacy is not specifically for parochial schools or public schools. “We are really advocating for the children, the ultimate beneficiaries of our funding, and that’s why it shouldn’t matter what school you go to: You should get all the services you need, whether security, transportation, or funding for food.”

The students on the Mission also split up into small groups for individual lobbying sessions in legislators’ offices.

Beaty Menchel, a teacher at SKA, said that initiatives like the STEM funding are “absolutely essential to educating our students in the 21st century.”

The elected officials said that having students participate in the Mission is vital to ensuring that it achieves its aims.

“Your personal advocacy makes a difference,” said Senate Majority Leader John Flanagan. When you come and visit … you make me more resolved, working with my colleagues, to ensure that your trip is productive in the short term and long term.”

Jack Aini, an attorney from Brooklyn who has children in Yeshiva of Flatbush and Magen David Yeshiva – both of which sent sizable contingents of students – was one of the parents who participated in the Mission, to express gratitude to the elected officials who have helped yeshivos and to advocate for the need of significantly increased funding.

“The rising cost of tuition year after year has become an enormous burden on all families who send their children to private/religious schools,” said Aini.

“Thanks to Teach NYS, our voices are being heard by the politicians who have the power to address the crisis. By showing up in Albany today with hundreds of students, teachers and parents, we were able to draw much-needed attention to our cause, and convey to our elected officials how important this issue is to their constituents.

“Over the last few years, it’s clear that we are making a real difference – a difference in the form of millions of dollars in increased funding to our schools, which will hopefully continue to grow, and start making a dent in our tuition crisis.”