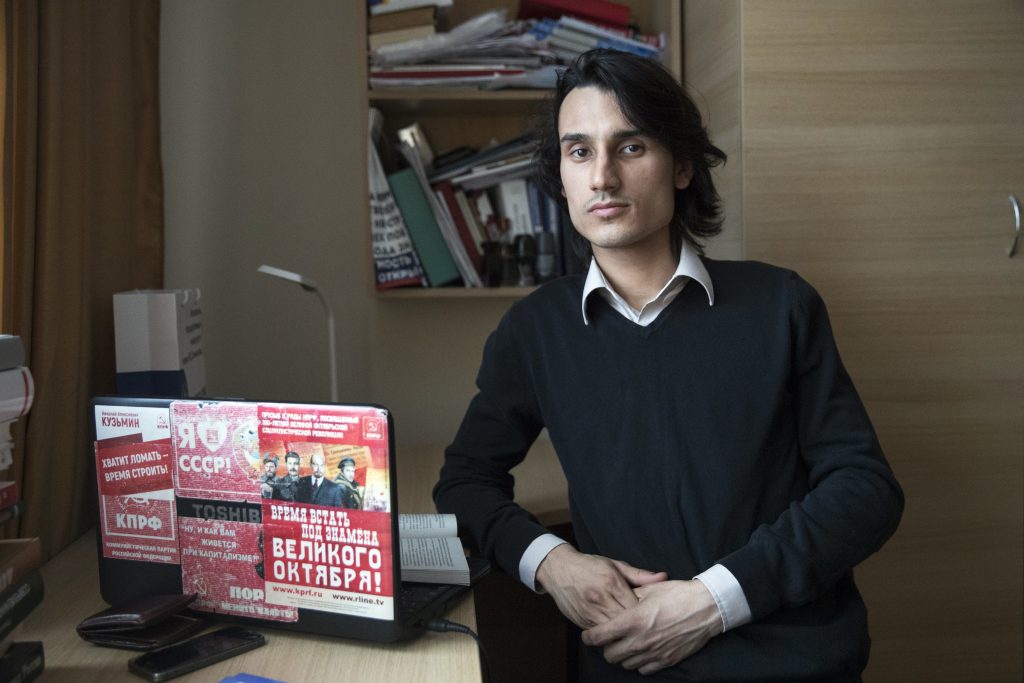 When Stepan Mikhailov, a 19-year-old linguistics student, talks about his lifetime spent under Russian President Vladimir Putin, a troubled look passes over his face.

“I don’t think I have a single friend who thinks that Putin is good,” he says from the kitchen of his dusty, bohemian Moscow apartment. “I think he is an evil character who only takes care of himself and his inner circle.”

Putin’s legacy depends not only on winning Sunday’s election — which he will, overwhelmingly — but also on ensuring that today’s first-time voters stay loyal to his vision.

That is not a foregone conclusion. Nationwide, young people are among his most ardent supporters. But in the Russian capital, many twenty-somethings — still in diapers when Putin first came to power in 2000 — were involved in recent opposition demonstrations and share Mihailov’s frustrations.

Putin meets Thursday with young volunteers, computer programmers and others seeking to join the civil service as part of a government outreach program to improve opportunities for talented youth.

Lusiya Shtein, a 21-year-old political activist, sees the past 18 years as the era of Putin and “his bandit friends.” She was elected as a local councilor when she was just 20, and is now working on Ksenia Sobchak’s presidential campaign.

Shtein knows that there won’t be substantial change soon — but she is busy preparing the ground for when the time comes. “I wanted to turn words into action, and I became an elected official so I could influence life in my district and improve it.”

Technology student Maxim Manolov, 20, feels his generation has been deprived of any real choice.

Until his penultimate year of high school, Manolov had no interest in politics. Then Russia annexed Crimea and supported separatists in eastern Ukraine. “It was the events in Ukraine that really politicized me,” he said. “I have lots of relatives connected with the region, and we started to argue and discuss what was happening.”

But polls show Moscow’s metropolitan, middle-class youth are far from representative of Russia as a whole.

A survey in December by the independent Levada Center found 86 percent of 18-24-year-old Russians approve of Putin as president, compared to 81 percent of the general public. Some 67 percent of younger voters surveyed believed Russia was going in the right direction, compared to 56 percent of all adults.

Many young Putin supporters feel they have more opportunities in Putin’s Russia compared with their parents. “Our generation is really lucky because we can do absolutely everything that we want,” said Anna Lichaeva, 19.

Like many other Russians, Lichaeva also supports Putin because he represents stability. “In the next six years, I am sure that nothing extraordinarily bad will happen,” she said during a pro-Putin youth event in central Moscow.

She does not, however, think that the president is without criticism. She believes Putin’s foreign policy is “too strong,” and finds it difficult to reconcile official rhetoric with what she has seen on her travels abroad.

“On TV they say that [the West] is bad and that they hate us,” she said. “But I’m sure that between people there isn’t such animosity.”

A larger problem for Russian democracy is the political apathy that is rife among the country’s youth.

Pollsters predict that many young Putin supporters won’t vote. They know he’ll win again, and some don’t see a reason to take part in a system without much choice.

With his preferred candidate, Alexei Navalny, barred from the presidential race, Mikhailov won’t be voting in this election. Meanwhile, art history student Maria Pogodina, 19, will be supporting the boycott Navalny has called as an alternative.

Pogodina was unhappy about what she described as “absurd” news flashes, blocked domain names and an atmosphere of heightened pressure in her country.

“We spend a lot of our conscious life on the internet, and it now feels really controlled and unpleasant,” she said.

Unfortunately for Putin, many Internet-savvy millennials read independent news channels, and are increasingly vocal against corruption and propaganda.

Ivan Apostolov, a political science student and Communist Party member, thinks inequality is the most pressing issue in Russia.

“The economy is stagnating and people are poorer than ever before,” said Apostolov, an ardent supporter of Pavel Grudinin, the strawberry tycoon and second most popular presidential candidate after Putin despite defending Soviet dictator Josef Stalin .

When exit polls come in Sunday night, the Kremlin will be watching closely to see how many young people voted for Putin, and how many bother to cast ballots at all.

Putin “has maintained stability and a generally peaceful situation. Given the politics that is going on in the world, it’s very good that there has been no conflict,” said Putin supporter student Ilya Krupenkov, 21, walking toward Red Square.

“I think that most people our age really don’t care and will not vote,” says Krupenkov. “Or they’ll vote just like us.”