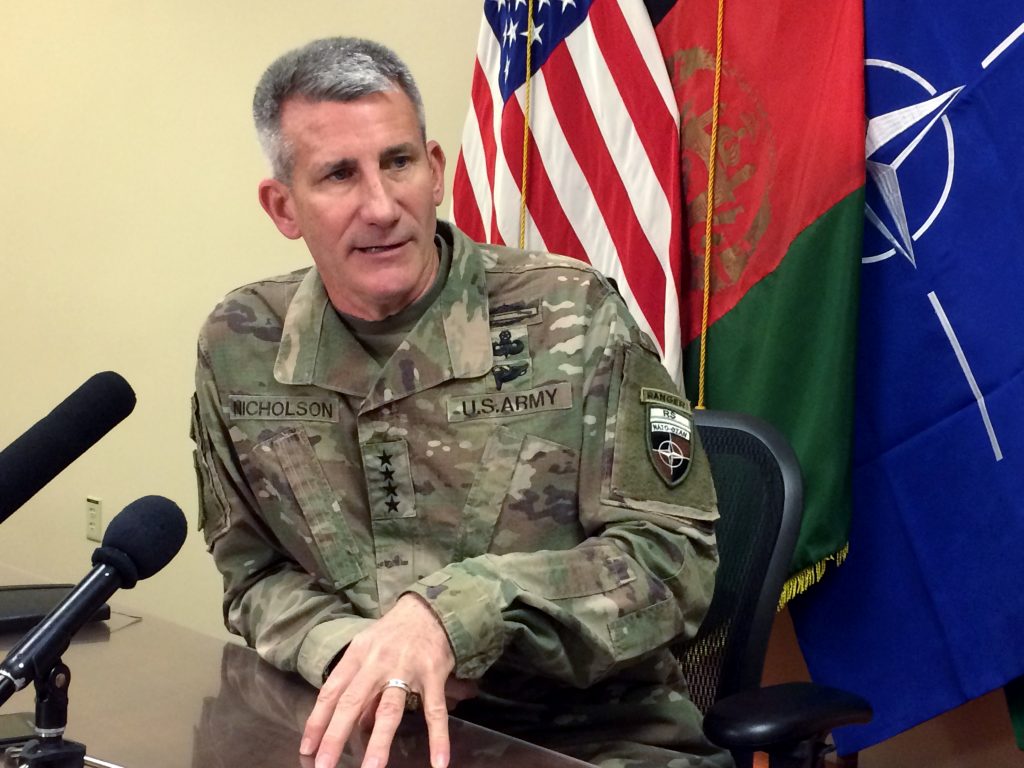 “We’ve increased the number of special operations we’re doing in and around the city to target the networks that are attacking the city,” Gen. John Nicholson said in an interview with a small group of reporters. “So Kabul is our main effort right now.”

He said the Afghan government has replaced the top five police officials in each district inside Kabul as part of a plan to more effectively counter the terrorists.

“This leadership element is key because what we found is many failures at the local level in terms of local security,” he said, noting that the Taliban in recent months have managed to carry out large attacks with high numbers of civilian casualties.

Nicholson said that some members of a newly arrived brigade of U.S. Army advisers are being assigned to mentoring Afghan police in Kabul as part of a comprehensive plan for improving security in a city of an estimated five million residents.

“I’ll just be very candid. We have a lot of work to do because this city has grown exponentially over the last 15 years” and in a haphazard way that left it vulnerable to movement by insurgents as well as criminal groups, Nicholson said.

In the interview, Nicholson also talked up prospects for peace negotiations with the Taliban, arguing that after 16 years of war the militants are weary of a stalemate on the battlefield.

Nicholson, who commands more than 14,000 U.S troops in an American-led coalition, acknowledged that peace talks, which the Taliban definitively rejected just two years ago, likely would take years to bear fruit.

His emphasis on a push for peace coincides with the Trump administration’s injection of new resources into the war effort and the start of the traditional fighting season this spring. It also comes as turmoil in the State Department raises questions about the steadiness, depth and effectiveness of American diplomatic clout.

At the same time, security in Afghanistan is so tenuous that parliamentary elections set for July could slip to autumn. Nicholson said pursuit of a second key feature of Pres. Trump’s strategy — pressuring Pakistan to halt its support for Taliban-linked terrorists who use Pakistan as a sanctuary — has yet to produce clear-cut results.

Asked whether Pakistan had changed its behavior in this regard, Nicholson said: “No changes yet that wouldn’t be potentially reversible.”

The U.S. and its Afghan partner have said many times during the course of America’s longest war that the Taliban were faltering and edging toward the peace table, only to be proven wrong. By some measures the Taliban today control more of Afghanistan than at any time since they were forced from power in a U.S.-led invasion in October 2001.

The Taliban have proven far more resourceful than the U.S. originally anticipated.

The Taliban have not yet responded to Afghan President Ashraf Ghani’s recent unconditional offer of peace talks. They have, however, insisted that they would only talk peace with Washington. The U.S. position is that the Taliban must talk to Afghan leaders.

Nicholson spoke to reporters Wednesday at Bagram Airfield north of Kabul shortly after consulting for a second day with Defense Secretary Jim Mattis. Mattis has a long history with the conflict: As a Marine general, he commanded a unit that established a crucial foothold in southern Afghanistan in November 2001.

Mattis told reporters on Tuesday that while getting the entire Taliban leadership to the peace table may be “a bridge too far,” some elements of the group “clearly are interested in talking to the Afghan government.”

Brig. Gen. Michael R. Fenzel, the coalition’s director of strategic plans, said small numbers of Taliban fighters are “coming in” to express interest in reconciling with the Afghan government. He declined to be more specific beyond describing them as groups of 10 or 20 fighters — “not a critical mass” of militants.

Nicholson said the U.S. government needs to focus more attention on the possibilities for a diplomatic opening to the Taliban.

“I would like to see a real concentrated effort on this,” he said in the interview. “We need to focus on this more.”