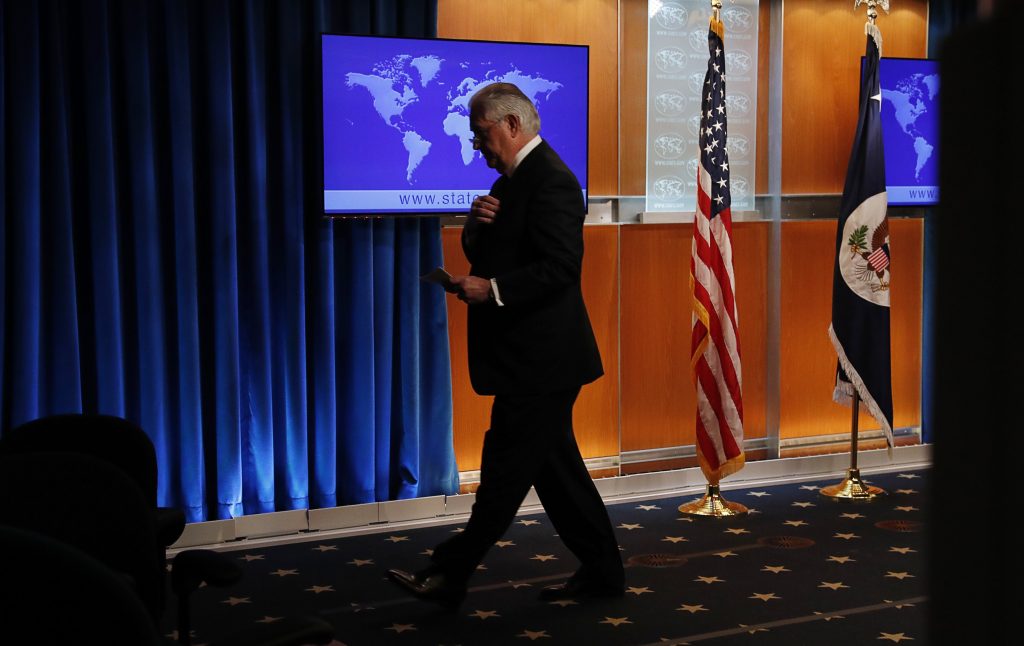 U.S. Secretary of State Rex Tillerson’s firing is reverberating across a Middle East where Iran fears his replacement will fight to end the 2015 nuclear deal, a hope of Gulf Arab states as Palestinians worry about a further-emboldened nationalist Israeli government.

Also at play is the ongoing diplomatic dispute between Qatar and four Arab nations, a crisis the former oilman sought to reconcile with no success during his brief tenure as America’s top diplomat.

How Tillerson’s proposed successor, CIA director Mike Pompeo, will handle these challenges remains to be seen. But Pompeo remains a major opponent of the atomic accord, while Tillerson had been pursuing a delicate strategy with European allies and others to try to improve or augment the Obama-era deal.

Already in Iran, some are expressing concerns.

Iran’s daily Javan newspaper, believed to be close to the hard-line Revolutionary Guard, said that replacing Tillerson with Pompeo signaled the end of the nuclear deal.

“For quitting the deal, his dumping was necessary,” Javan said.

That was echoed by Ali Khorram, a former Iranian envoy to the United Nations, in the pro-reform daily newspaper Arman.

“Pompeo is very interested in waging a war similar to the Iraq war by citing international regulations,” Khorram wrote. “European powers will play a role in balancing his desire.”

“What matters to the Islamic Republic of Iran are the policies and approaches of the United States in regard to international issues and toward Iran,” Ghasemi told journalists. “We closely monitor their approaches and macro policies and will take appropriate stances accordingly in the future.”

Tillerson’s firing was welcome news for Saudi Arabia and the United Arab Emirates, which view Iran as a regional menace. They have also pushed Washington to take a harder line on Qatar, which they and other Arab nations have boycotted since last year, accusing it of supporting terrorist groups and cozying up to Iran. Tillerson had sought to mediate the crisis among the U.S. allies.

In the UAE on Wednesday, the English-language Khaleej Times borrowed from the U.S. president’s show-biz days for its headline: “YOU’RE FIRED!” Saudi Arabia’s English-language Arab News had the same headline.

Another English-language newspaper, the state-aligned The National newspaper of Abu Dhabi, offered an editorial saying Tillerson’s firing would “surprise few,” pointing to his disagreement with Pres. Trump over Qatar.

The UAE, along with Bahrain, Egypt and Saudi Arabia, cut off land, sea and air routes to Qatar in June 2017. Qatar, which has backed Islamist opposition groups like the Muslim Brotherhood, has denied supporting terrorists. It shares a massive offshore natural gas field with Tehran.

Pres. Trump has at times appeared to side with Qatar’s rivals in the dispute, while Tillerson had projected a more neutral stance. ExxonMobil, which Tillerson ran before becoming secretary of state, had a long business history in Qatar’s natural gas plays.

“While Mr. Tillerson shortsightedly urged Saudi Arabia and allies in the quartet to end their boycott of Qatar, Mr. Trump named Doha ‘a funder of terrorism at a very high level,'” The National’s editorial page said.

Faisal J. Abbas, the editor-in-chief of the Arab News, similarly said Tillerson’s mishandling of the Middle East “turned the region into his political graveyard.” Abbas wrote that Tillerson’s handling of the Qatar dispute proved he was “‘full of gas’ more than anything else.”

“Is there reason to believe Doha had influence over Tillerson? Was he really biased toward Qatar?” Abbas wrote in a front-page editorial. “Or was he surrounded by so many State Department officials still stuck in the Obama era that they undermined his ability to act? None of this matters now.”

Abdulkhaleq Abdulla, a prominent Emirati professor of political science, called Tillerson “the worst foreign minister in the history of America” on Twitter. He also implied Gulf Arab unhappiness with Tillerson led to his ouster.

“History will remember that a Gulf state had a role in expelling the foreign minister of a superpower and that’s just the tip of the iceberg,” he wrote.

Kuwait, which has sought to broker an end to the Qatar crisis, offered no immediate comment, though a local newspaper described Tillerson’s departure as striking “like an earthquake” in a headline.

For Israel, the Pompeo announcement appears to be good news for Prime Minister Benjamin Netanyahu, who has been an outspoken opponent of the Iranian nuclear deal and who sees Iran’s involvement in neighboring Lebanon and Syria as a major threat.

PM Netanyahu has also welcomed the U.S. decision to move its embassy to Jerusalem — a move for which Tillerson showed little enthusiasm.

“In my meetings with Pompeo I was very impressed by his experience and abilities. I believe that also in his position as Secretary of State we will work very well together,” PM Netanyahu said in a statement Wednesday night.

“Israel and its right wing American supporters will rejoice in the unceremonious sacking of Secretary of State Rex Tillerson and his replacement with CIA Director Mike Pompeo,” wrote Chemi Shalev, a columnist for the Haaretz daily. “Tillerson was seen as reserved and distant about Israel, while Pompeo is viewed as a warm supporter. Tillerson sought to preserve the Iran nuclear deal, while Pompeo is aligned with the demand of Donald Trump and Benjamin Netanyahu to fix it, or, in greater likelihood, abandon it altogether.”