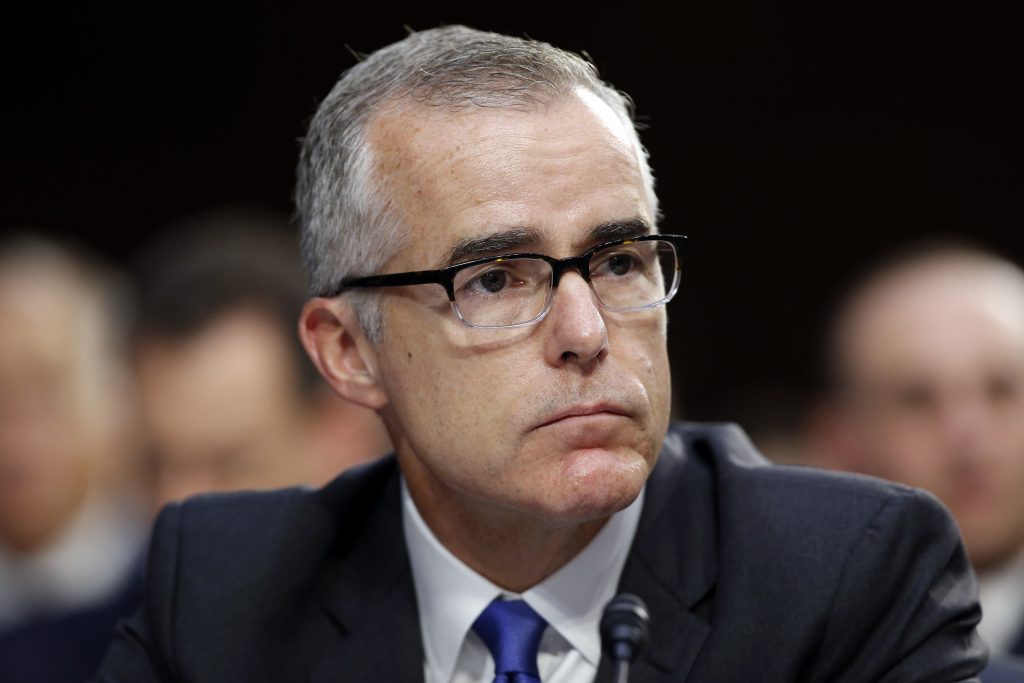 The FBI office that handles employee discipline has recommended firing the bureau’s former deputy director over allegations that he authorized the disclosure of sensitive information to a reporter and misled investigators when asked about it, leaving Attorney General Jeff Sessions to decide whether he should fire the veteran official just four days before his expected retirement date, people familiar with the matter said.

The recommendation from the FBI’s Office of Professional Responsibility is likely to add fuel to the political fire surrounding former deputy director Andrew McCabe, who abruptly stepped down from his post earlier this year but technically remained an FBI employee.

McCabe was hoping to retire Sunday, when he becomes eligible for his full benefits. If he is fired first, he could lose those. President Donald Trump has long made McCabe a particular target of his ire, and the recommendation to fire the former No. 2 FBI official could give him new ammunition.

The disciplinary process is still ongoing at the highest levels of the Justice Department, and no final decision has been made on the discipline McCabe will face. The call will ultimately be made by Sessions because of McCabe’s seniority, a person familiar with the matter said.

Through a representative, McCabe declined to comment. A Justice Department spokeswoman said in a statement: “The Department follows a prescribed process by which an employee may be terminated. That process includes recommendations from career employees and no termination decision is final until the conclusion of that process. We have no personnel announcements at this time.”

Sessions is traveling on Thursday, though other officials at the Justice Department still have to consider the matter before he makes a decision. It is possible that McCabe could be fired 48 or 24 hours before he is able to retire.

Justice Department Inspector General Michael Horowitz has for some time been working on a report that blasts McCabe for allowing two high-ranking bureau officials to sit down with the Wall Street Journal as the news outlet prepared a story in 2016 on an investigation into Hillary Clinton’s family foundation, then misleading the inspector general’s team about his actions. A person familiar with the matter said Horowitz’s findings are what sparked the Office of Professional Responsibility’s recommendation, which was first reported by The New York Times. Horowitz’s report has not yet been released.

McCabe, 49, had long been expected to retire on March 18 though he abruptly left his post earlier this year after his boss, FBI Director Christopher Wray, was told of what the inspector general had found.

The situation now seems fraught for all involved. If the Justice Department does not move on the recommendation, conservatives might view officials there as unfairly protecting McCabe. Pres. Trump – who already has a strained relationship with Justice Department leaders – might be particularly displeased.

But if the FBI fires McCabe with just days to go before his retirement, it could be viewed as bending to the will of a vindictive president. Pres. Trump has previously suggested McCabe was biased in favor of Clinton, pointing out that McCabe’s wife, who ran as a Democrat for a seat in the Virginia legislature, received hundreds of thousands of dollars in donations from the political action committee of Terry McAuliffe, the former governor of Virginia and a noted Clinton ally. The president remarked in December that McCabe was “racing the clock to retire with full benefits.”

The inspector general has since last January been investigating the FBI and Justice Department’s handling of the politically charged probe into Clinton’s use of a private email server while she was secretary of state, which is separate from the foundation probe. McCabe represents but a piece of that work.

Horowitz is also examining broad allegations of misconduct involving former FBI Director James Comey, including the public statement he made recommending that the Clinton email case be closed without charges and his decision 11 days before the election to reveal to Congress that the FBI had resumed its work. McCabe briefly took over as the FBI’s acting director after Pres. Trump fired Comey in May.

The story which McCabe authorized FBI officials to discuss came just as the bureau announced it was resuming its look at Clinton’s use of a private email server while she was secretary of state, though it focused more on a different case involving her family’s foundation.

The story presented McCabe as a complicated figure – one who lower level officials felt was stymieing their work, even though it detailed McCabe pushing back against Justice Department officials so the case could move forward.

The inspector general was interested in McCabe’s role in authorizing officials to talk about the matter, people familiar with the case said, because the story detailed ongoing criminal investigative work, which law enforcement officials are not normally allowed to discuss.

The Wall Street Journal story was written by Devlin Barrett, who is now a reporter at The Washington Post. Recently released text messages show that Barrett had talked with the FBI’s top spokesman, Michael Kortan, and FBI lawyer Lisa Page, who worked for McCabe, two days before it was published.

Background briefings with reporters are common in Washington, particularly when reporters have information that officials feel compelled to respond to or add context. In this instance, though, it might have been viewed as inappropriate because the discussion was focused on an ongoing criminal investigation.