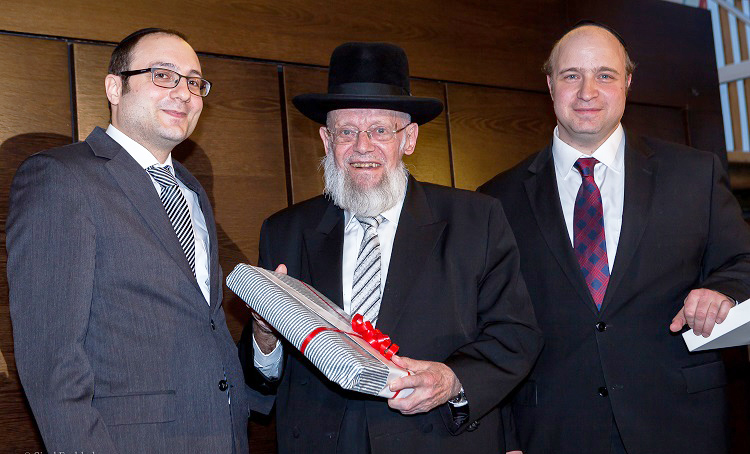 In a moving ceremony held last week, Dayan Chanoch Ehrentreu, shlita, was awarded Germany’s only federal decoration, the Federal Order of Merit. The award recognizes the crucial role that Dayan Ehrentreu has played in rebuilding traditional Jewish life in Germany in his role as director of the Rabbinical Seminary of Berlin.

The award was presented to Dayan Ehrentreu in a ceremony in the Foreign Office in Berlin. Rabbi Josh Spinner, executive vice-president and CEO of the Ronald S. Lauder Foundation, addressed the audience, followed by Dr. Josef Schuster, president of the Central Council of Jews in Germany. Sigmar Gabriel, minister for foreign affairs, presented the award to Dayan Ehrentreu.

Reflecting on his receipt of the Order of Merit, Dayan Ehrentreu addressed the audience, “Torah Judaism is deep rooted in Germany. More than 1,000 years ago great Torah scholars lived in Germany, scholars whose teachings we still learn today […]. These Rabbinical scholars and leaders came from all over Germany: Ladenburg, Mainz, Worms, Speyer, Hamburg, Saltsburg, and this tradition of Torah Judaism which existed in Germany for over a thousand years has now returned back once again.

“Therefore, I salute with admiration the Federal Republic of Germany, who by presenting this Order of Merit have expressed their recognition of the outstanding achievements of this new community and its institutions, and at the same time, recognize that it is a contribution to Germany itself. My involvement in this whole project is small, compared to the selfless efforts of all those who gave their heart and soul to bringing success to this project. I therefore, with feelings of honor and feelings of humility, accept this Order of Merit, but I do so not only for myself, but I do so also as their representative.”

Reacting to the award, Rabbi Josh Spinner said, “The Jewish community in Germany would not be thriving as it is today without the help and support of Dayan Ehrentreu. The time and dedication he has put into our community has laid the foundations for growth and has been the catalyst for our community’s continued success.”