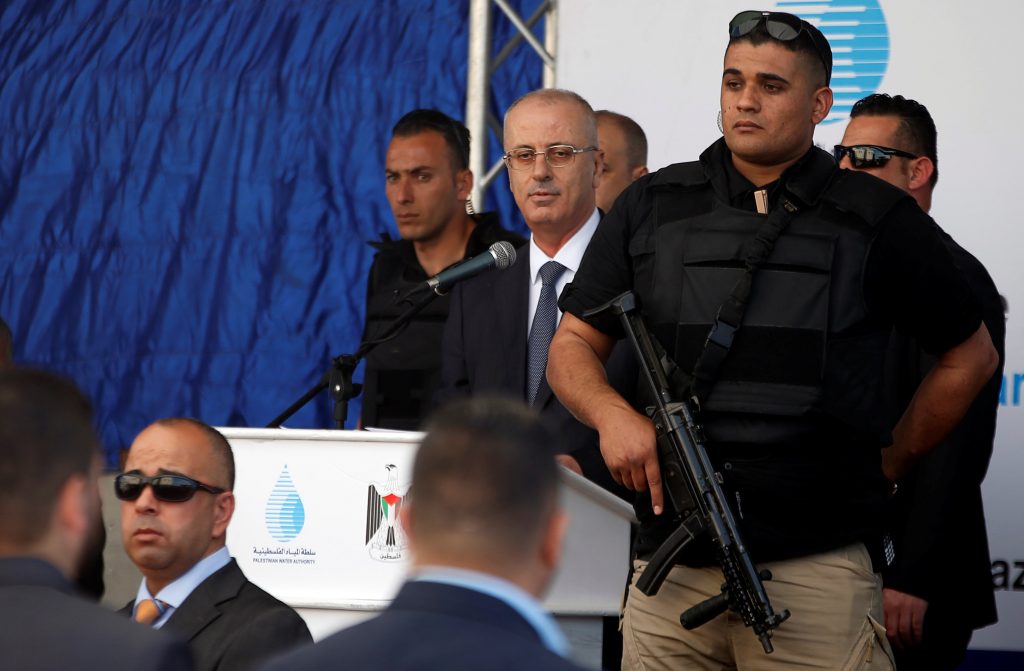 In a statement on Tuesday, Jason Greenblatt said Hamas and other terrorist groups have brought Gaza “to the brink of collapse.”

“Attack on PA delegation opening water treatment plant is an attack on the welfare of the people of Gaza. Wishing a speedy recovery to the injured,” Greenblatt tweeted.

Hamdallah was not harmed when the roadside bomb struck his convoy, and said it would not disrupt efforts to reconcile with Hamas, which seized Gaza from forces loyal to the Western-backed Palestinian Authority in 2007.

No one immediately claimed responsibility for the attack. Hamas condemned the attack and vowed to launch an “urgent” investigation.

However, suspicion of Hamas involvement was running high.

Adnan Damiri, a spokesperson for the PA security forces, said: “We don’t trust Hamas to investigate the explosion. We suspect Hamas was involved. Hamas must remove itself from the investigation,” The Times of Israel reported.

PA President Mahmoud Abbas is set to meet with his security chiefs in the wake of the incident.

PA intelligence chief Majed Faraj, who was in the vehicle with Hamdallah when the roadside explosion detonated, wounding seven of his bodyguards, says the attack was “a cowardly act aimed at harming national unity,” according to Wafa.

“It is too early to accuse anyone, but those who are in charge shoulder the full responsibility for security on the ground,” he is quoted as saying, a reference to Hamas, which was responsible for securing Hamdallah’s visit.

Hamdallah reportedly called the attack “well prepared and the bomb was buried two meters [6 feet] into the ground,” according to Wafa.

The United Nations Mideast envoy also condemned the attack. In a statement, Nickolay Mladenov called for a prompt investigation into what he called a “grave incident” so the perpetrators can be brought to justice.

Mladenov says Tuesday’s blast was carried out by people trying to undermine reconciliation and “destroy the chances for peace.” He did not accuse Hamas.