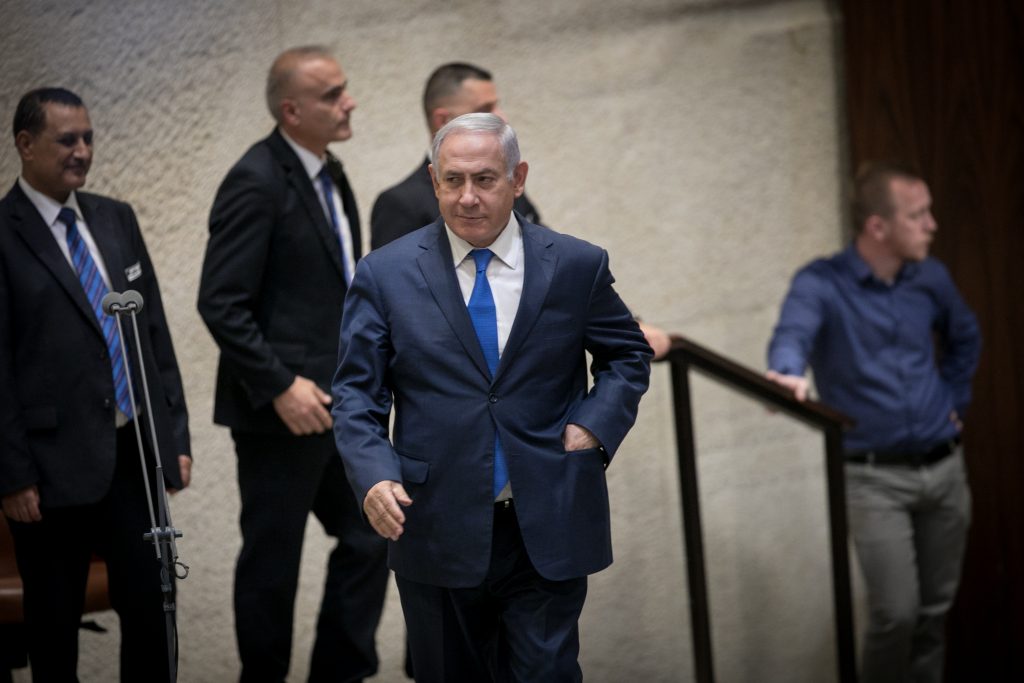 The fate of Binyamin Netanyahu’s government hangs in the balance Tuesday, as the Knesset prepares to vote on the compromise Draft Bill on its first reading. The bill is expected to pass – but without the support of Yisrael Beytenu, whose leader, Avigdor Liberman, reiterated that his party would not support the bill, but would not quit the coalition until and unless it is passed on its second reading.

The government has 61 votes even without Yisrael Beytenu’s votes, so passage of the bill on its first reading is not an issue. What could bring the government down, however, is Netanyahu’s insistence on coalition discipline. According to the coalition agreement between the Likud and its partners, coalition members are obligated to vote for government-sponsored legislation – which the compromise Draft Bill is, due to the changes worked into it by Netanyahu, Justice Minister Ayelet Shaked, and Deputy Health Minister Rabbi Yaakov Litzman.

Parties that do not toe the coalition line on such legislation can expect sanctions, and one of those sanctions is the sacking of ministers belonging to the coalition partner that defies the government. While Liberman is not a voting MK – he resigned his seat to take the Defense Minister position, in accordance with the “Norwegian Law” that requires top ministers to withdraw from the Knesset – Immigration Affairs Minister Sopha Landver, a Yisrael Beytenu member, is a voting MK, and she is expected to vote against the bill. If she does, Netanyahu has the right to fire her – and if he does, Liberman said, his party would resign from the government now, instead of waiting until the Draft Bill is put up for its second and third reading.

If he had a choice, Liberman told Hadashot (News) Tuesday, he would prefer not to quit the coalition. “Elections are not the right move right now for Israel, or for Yisrael Beytenu,” he said. With that, he stressed that his party would not back down. “This law is extremely unfair. It preserves the social gaps in this country, and will just preserve poverty and the tension between groups. If Sopha Landver is fired, we will apparently be going to elections. The ball is in Netanyahu’s hands.” When asked about polls that show his party losing seats – and the Likud gaining – Liberman said that “according to the polls, Yitzchak Herzog is supposed to be Prime Minister. The best poll is the one counted at the end of Election Day.”

Speaking on Reshet Bet, Shaked appealed to both sides to back down. “This is a fake crisis,” she said, repeating comments she made earlier. “Mr. Prime Minister, taking down a right-wing government for nothing is a historic mistake. We saw this in 1992,” when then-Prime Minister Yitzchak Shamir allowed the government to be broken up, “and we got the Oslo Accords.”

The Draft Bill is set to come up for a Knesset vote early Tuesday evening. Immediately after, the Knesset will vote on a measure to disperse itself, presented by Meretz and Yesh Atid. Zionist Camp plans to introduce its own measure for dispersal of the Knesset. If coalition partners other than Yisrael Beytenu – the chareidi parties, Jewish Home or Kulanu – vote for those measures, the Knesset will end its session, and an interim government will take over until elections are held, within three months.