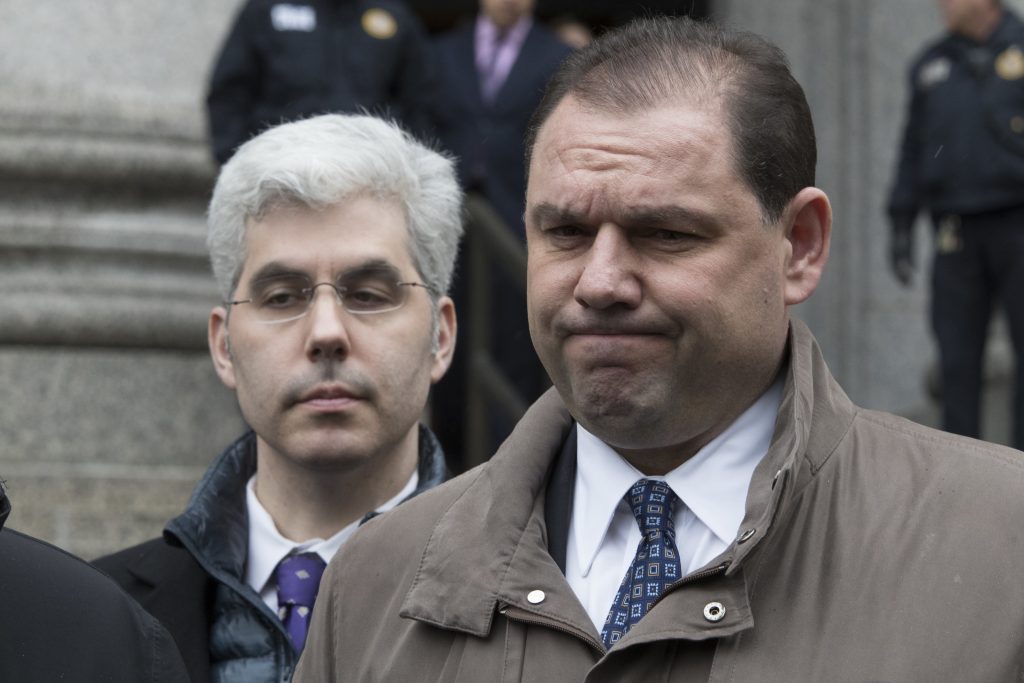 A former top aide to Gov. Andrew Cuomo was convicted on corruption charges Tuesday at a trial that further exposed the state capital’s culture of backroom deal-making.

A federal jury in Manhattan found Joseph Percoco guilty of two counts of conspiracy to commit honest services wire fraud and one count of soliciting bribes after deliberating for parts of three weeks. He could face time in prison.

Jurors had informed the court twice that they were deadlocked in the case against Percoco and three businessmen accused of paying his family more than $300,000 in bribes, but U.S. District Judge Valerie Caproni asked them to keep deliberating and on Tuesday said she would accept a partial verdict.

Percoco was acquitted of two extortion counts and one of the bribery charges he had faced.

The jury also convicted one of the businessmen charged with paying the bribes, Steven Aiello, an executive at a Syracuse area development company, Cor Development. A second executive with the company, Joseph Gerardi, was acquitted on all counts. The jury said it couldn’t reach a unanimous decision on a fourth defendant in the case, energy company executive Peter Galbraith Kelly.

The verdict followed a multi-week trial that put a spotlight on the attempts of several private companies to gain influence with Cuomo, a Democrat who once likened Percoco to a brother.

Defense lawyers said the payments Percoco received, including $35,000 in cash and a $90,000-per-year job for his wife, were legitimate fees for consulting work performed at a time when he was out of state government.

Cuomo was not accused of wrongdoing, but the trial highlighted Albany as a place where deep-pocketed special interests use campaign donations to gain influence and flout rules meant to regulate lobbying.

There was testimony about how administration officials used private email addresses to conduct state business in secret and about how Percoco continued to work out of a state office even after he was supposed to have left government to lead Cuomo’s 2014 re-election campaign.

On Tuesday, Cuomo addressed a rally near the state Capitol in Albany but left without taking questions from reporters. A message left with his spokesman following the verdict was not immediately returned.

Within minutes after the verdict was announced, good-government groups called on Cuomo and lawmakers to take action this year to strengthen oversight of government contracting and boost ethics enforcement.

“Albany stays on trial,” said Blair Horner, executive director of the New York Public Interest Research Group, who called the verdict “a wake-up call to Albany to do something to clean up its ethics act.”

Two former powerful leaders in the state, ex-Assembly Speaker Sheldon Silver, a Democrat, and ex-Senate Majority Leader Dean Skelos, a Republican, are scheduled to be retried on corruption charges this year after early convictions were thrown out.

Prosecutors in the Percoco case had relied heavily on testimony from another former Cuomo aide, Todd Howe.

Howe, who pleaded guilty to numerous crimes after cooperating with prosecutors, became a focus of the trial when he admitted violating his deal with prosecutors by improperly trying to recover the cost of a night at a luxury Manhattan hotel from a credit card company.

It led the government to have his bail revoked midway through his seven days on the witness stand.

None of the defendants testified.

Prosecutors said Aiello and Gerardi hoped a $35,000 bribe to Percoco would secure the governor’s help to re-develop a state-owned tract of land in Syracuse known as the Inner Harbor. They said Kelly, a former executive at Competitive Power Ventures, hoped to clear hurdles with the state for power plants by paying Percoco’s wife $290,000 in salary for a job that required little work.

In closing arguments, prosecutors cited emails in which Percoco and Howe used the word “ziti” to describe money that was changing hands.

They also relentlessly attacked the credibility of Howe, who testified that creditors had to line up to get a piece of his paycheck after he repeatedly borrowed money and then refused to pay his bills.

In closing arguments, Assistant U.S. Attorney David Zhou did not apologize for Howe.

“Who else would do such a sleazy job?” Zhou asked. “The government didn’t choose Todd Howe as a witness. The defendants did.”