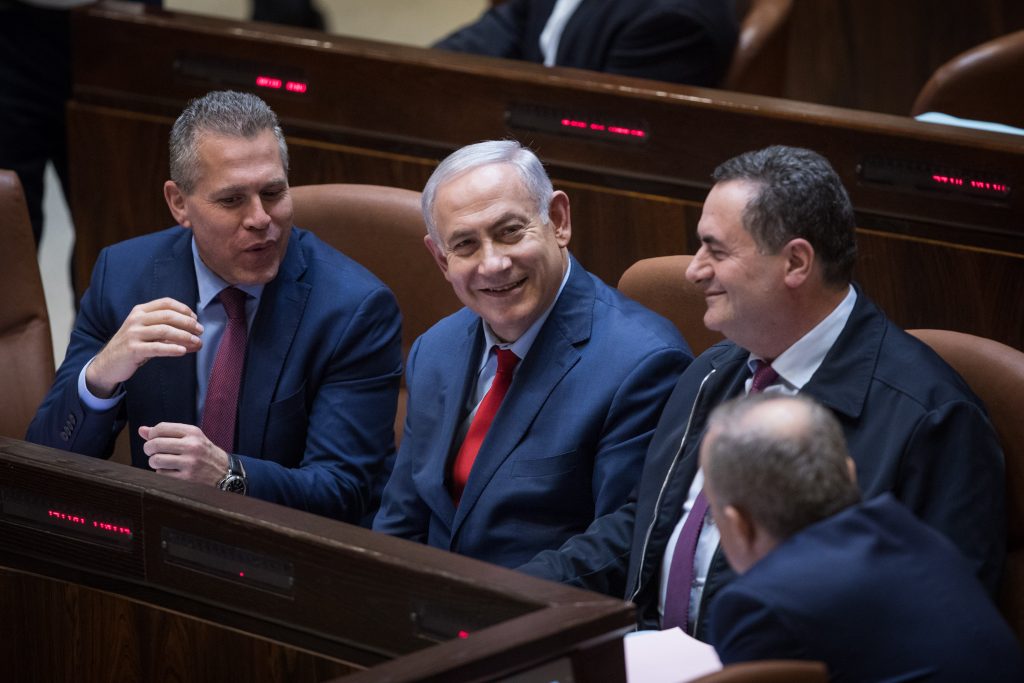 The coalition crisis appeared over on Tuesday night as Israeli Prime Minister Binyamin Netanyahu announced that a compromise had been reached, and days of mutual recrimination over possible early elections were replaced with a round of back patting.

PM Netanyahu himself confirmed reports of a deal to avert early elections:

“I said yesterday I’d make a supreme effort to prevent elections… I promised, and I have kept that promise,” he told the Knesset plenum on Tuesday night.

The vote on the military draft bill, which has been at the center of the crisis, was passed preliminarily tonight by a vote of 59 to 38 following the coalition deal.

He thanked his coalition partners for “showing responsibility. It’s important that we decided together to keep going, together.”

And reveling in the moment, he once again mocked the opposition, who were taken to the brink of elections that the polls have been predicting he would easily win: “That was scary, huh?”

“If there were elections, I’d be back standing here, and you’d be back to interpreting me over there. The public trust in us is huge. Now we’re going back to work,” said PM Netanyahu.

Education Minister Naftali Bennett, who had derided it as a “false crisis,” joined in the self-congratulations:

“Common sense won. The national interest prevailed. I congratulate my friends in the coalition who took part in solving this crisis. We will continue to serve Israel. A lot of work is still ahead.”

The announcement came at the end of a day of emergency coalition meetings, unofficial speculation and media frenzy as the Knesset vote on the military draft bill appeared imminent.

Israeli media quoted sources in the government describing a compromise solution to the crisis, which called for preliminary passage of the bill despite opposition from Yisrael Beytenu, and final passage of the 2019 state budget on Tuesday night.

The Cabinet voted unanimously to allow coalition members to vote as they wish on the bill. As a result, although Yisrael Beytenu minister Sofa Landver voted against it, thus opening the way for Prime Minister Netanyahu to fire her, the suspension of coalition discipline in the vote allowed her and the party to remain in the coalition.

The bill, which was drafted by chareidi MKs to protect the traditional exemption of yeshivah students from military service, will reportedly undergo unspecified revisions in coordination with the Defense Ministry before being brought for final voting after the Knesset’s spring recess.

Coalition MKs also voted down an opposition motion to dissolve the Knesset in order to bring on early elections, according to the media reports.

“We have taken a major step away from elections … we believe we can avoid early elections,” a senior source in the prime minister’s circle was quoted telling Army Radio.

PM Netanyahu’s decision to avoid elections was said to flow from several simultaneous developments: lack of support for June elections, with only Yesh Atid, Meretz and part of the Zionist Camp in favor, and most of the Likud; a Channel 2 poll that found 54 percent of Israelis against early elections; and the emergence of a new party founded by former Yisrael Beytenu MK Orly Levy-Abecasis that could edge out two of PM Netanyahu’s current coalition partners, Yisrael Beytenu and Shas.

“If one of the parties in our bloc does not cross the electoral threshold, it endangers the rule of the Right,” PM Netanyahu was quoted as saying in closed conversations.