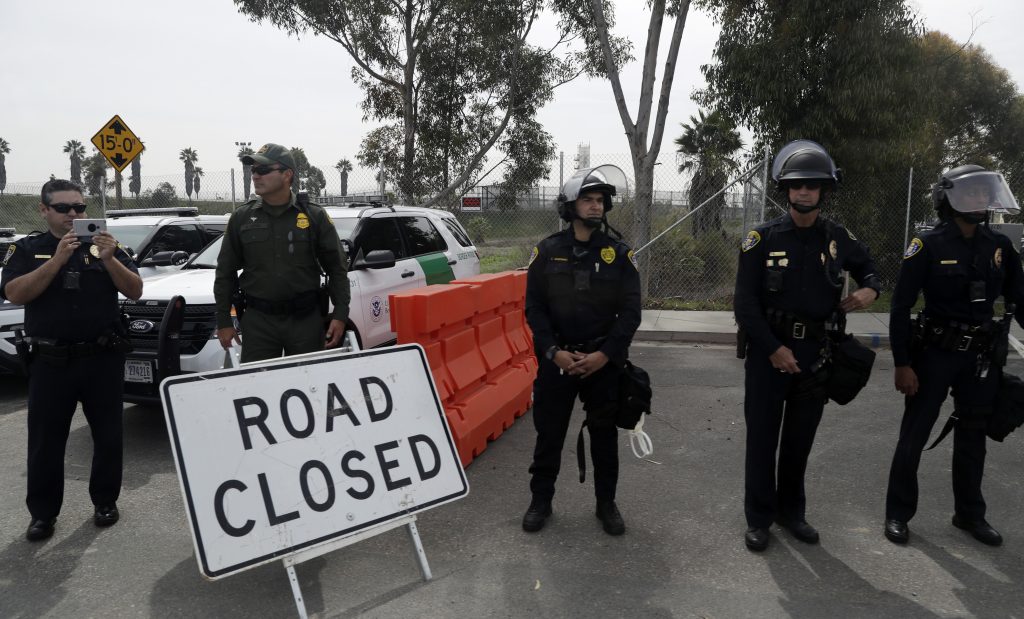 Protesters chanted, “No ban! No wall!” near the San Ysidro border crossing, where tens of thousands of people enter the U.S. daily from Tijuana, Mexico, many on their way to work or school in San Diego. Drivers honked as a show of support.

José Gonzalez, 21, stopped to snap a photo of the protesters holding signs, including one that read: “Wall off Putin!”

“I don’t think it’s really fair how he has the choice to separate us,” said González, a dual citizen who lives in Tijuana and crosses daily to work at a San Diego ramen restaurant.

Army veteran Mark Prieto, 48, shook his head as he walked by the protest.

“People are so narrow-minded,” said the firefighter, who voted for Pres. Trump. “Finally we have someone who is putting America first.”

Pres. Trump will examine eight 30-foot-tall prototypes built last year along the border in a bid to fulfill his signature campaign promise. Dozens of pro- and anti-wall demonstrators gathered peacefully on opposite sides of a street leading to the prototypes, with a heavy police presence separating them.

Large trucks filled gaps between the prototypes on Monday, offering a layer of protection. A man, woman and two children were seen climbing the border fence at the site and were immediately detained.

The president also will speak with immigration enforcement officials and with Marines at Marine Corps Air Station Miramar before heading to a fundraiser in Los Angeles.

San Diego’s Republican mayor criticized Pres. Trump’s short visit, saying the president won’t get a full picture of the city. Kevin Faulconer said that if Pres. Trump stayed more than a few hours, he would see that a strong economy and free trade aren’t a contradiction but a way of life.

The mayor, a business-friendly Republican and ardent supporter of the North American Free Trade Agreement, said a popular cross-border airport terminal connecting San Diego and Tijuana shows that “building bridges has worked wonders.” The terminal is a few miles from the border-wall prototypes.

Pres. Trump had campaigned against NAFTA as a job killer that he said encouraged American companies to move factories to Mexico to exploit cheap labor. Renegotiations over the deal began last summer.

The issue has led to heightened tensions between California and the Trump administration. The Justice Department recently sued over state laws that limit cooperation with immigration authorities, which state officials have harshly criticized.

Jeff Schwilk, founder of San Diegans for Secure Borders and organizer of a pro-Trump rally, said the city resolution does not reflect the views of many residents, who feel the border is not secure.

“We absolutely want President Trump to feel welcome and to come inspect the prototypes so we can get the wall built,” he said.