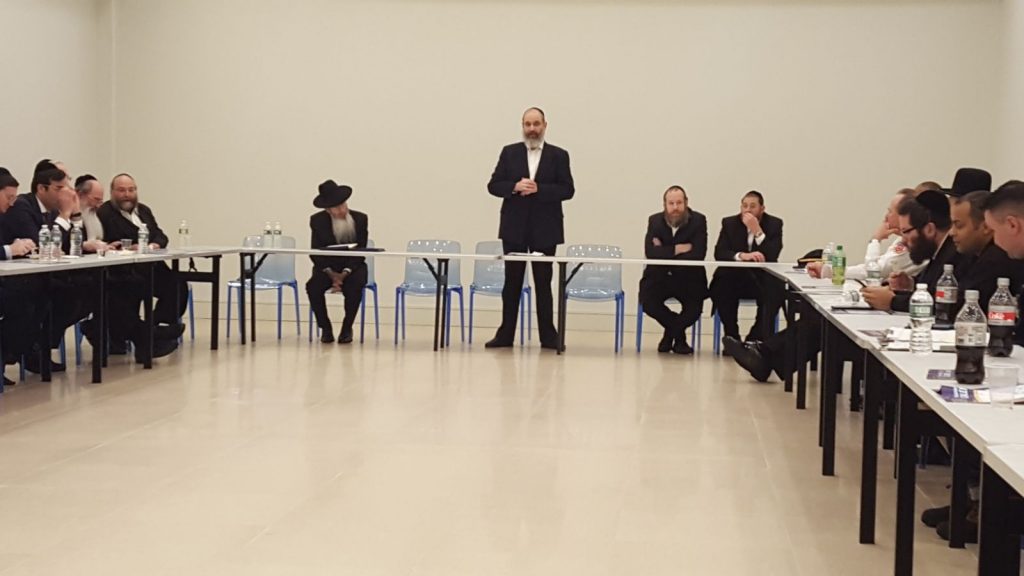 These are the agencies that make New York state run, an alphabet soup of entities and groups who have the ability to make Pesach an enjoyable one for the Orthodox community or turn matters into a tough slog.

The approximately 35 men and women, representing a disparate cluster of agencies which directly affect life in the state, gathered on Tuesday afternoon to hear what Pesach is all about and how to know which bizarre activities they are going to come upon over the next few weeks are legitimate.

“There’s a lot of unexpected that you should expect,” declared Yanky Meyer, the founder and president of the Misaskim disaster response organization, who organized the event in a basement conference hall at the Boro Park Hatzolah’s garage.

“Pick up the phone and we’ll be happy to help explain it,” he urged. “We cannot celebrate the holiday without the cooperation of each and every one of you.”

The meeting, billed by organizers as New York’s most comprehensive pre-Pesach conference ever, discussed a range of scenarios, from easing traffic enforcement to perhaps sitting on an arrest that can wait until after Yom Tov and from preparing for chametz burnings to instructions for airport security on how to inspect matzah.

Rabbi Meyer told Hamodia that he invited every agency that could conceivably have an impact on Pesach preparations. This includes such disparate federal agencies as the FBI and U.S. Customs and Border Protection and local agencies such as the Administration for Children’s Services, the district attorney’s office, New Jersey Transit, the State Police and the MTA.

Harav Dovid Goldwasser, Rav of Khal Bnei Yitzchok in Flatbush, opened the meeting by thanking those present for making the wheels of the city run smoothly.

“We realize what it means to have everyone here and we value and appreciate it,” Rav Goldwasser said.

Rabbi Meyer distributed a calendar for the months of March and April, in which icons highlighted various dates apprising law enforcement and emergency response agencies of what to be aware on any given day.

For example, a synagogue icon indicated days in which people will be congregating in shuls, which would require extra security and feature fewer vehicular traffic. A family image represents days such as Chol Hamoed, when children are out of school and families will be at attraction sites.

“This is the time of year,” Rabbi Meyer said, turning to the three representatives from the ACS, “that you get a call to check out a family and you knock on the door and nobody is there.”

“They’re not trying to hide from you,” he assured the city employees. “They’re just out and enjoying the holiday.”

“Sometimes,” he continued, now addressing a representative from the Brooklyn district attorney’s office seated in the back of the room, “you have a white collar crime that was investigated for months and months [and you want to make an arrest] — it waited this long, it could wait a week longer.”

Airport personnel were told of the distress a passenger may feel if he or she were to touch their box of matzah. Rabbi Meyer explained how matzah is made mostly by hand and fliers are likely to hold it with them on the plane rather than store it with the luggage.

“You have an agent that just finished a sandwich and he touches that box of matzah — it’s a loss of $60, $70 or even $100,” Rabbi Meyer said. “You can take that box of matzah and put it away until after the holiday. It’s useless.”

Agents, he suggested, should notify passengers that they are aware of the religious sensitivity of their matzah and would be careful with it.

Port Authority, MTA and Highway Patrol police were informed which day to expect heavier than usual traffic, along with what to do when someone is stranded on the road after Yom Tov comes in.

The two weeks before Pesach are Boro Park’s biggest shopping season, often stretching into the wee hours of the morning. Everything from cases of eggs and potatoes to yards-long rolls of plastic cardboard are sold.

Then there are the yeshivah schedules. As Pesach draws closer, more children will be on the streets, and noticeably Orthodox Jews will have a greater presence in the broader city. The NYPD’s Hate Crimes Task Force will be more attuned during those days and police will be conducting more shul patrols.

Fire and emergency officials were reminded that this is the season that may see an uptick of arrivals in the burn units, when amateurs will be handling a variety of heat-emitting devices. People use blowtorches to kasher, a lot of hot water, as well as oven cleansers that are dangerous if exposed to the skin.

NYPD Brooklyn South Chief Steven Powers put on an appearance, holding up a memo book which he said contained all the special Pesach preparatory work needed in his district.

“We will be there for the Jewish community as always,” said Powers, who oversees the entire southern Brooklyn. “We’ve been here for the past 40, 50 years and will continue to be there.”

But one ubiquitous Boro Park jam could not be so easily solved.

After Rabbi Meyer finished asking all attendees to briefly introduce themselves and their agencies, one man wearing a pink shirt arrived, a half hour into the proceedings.