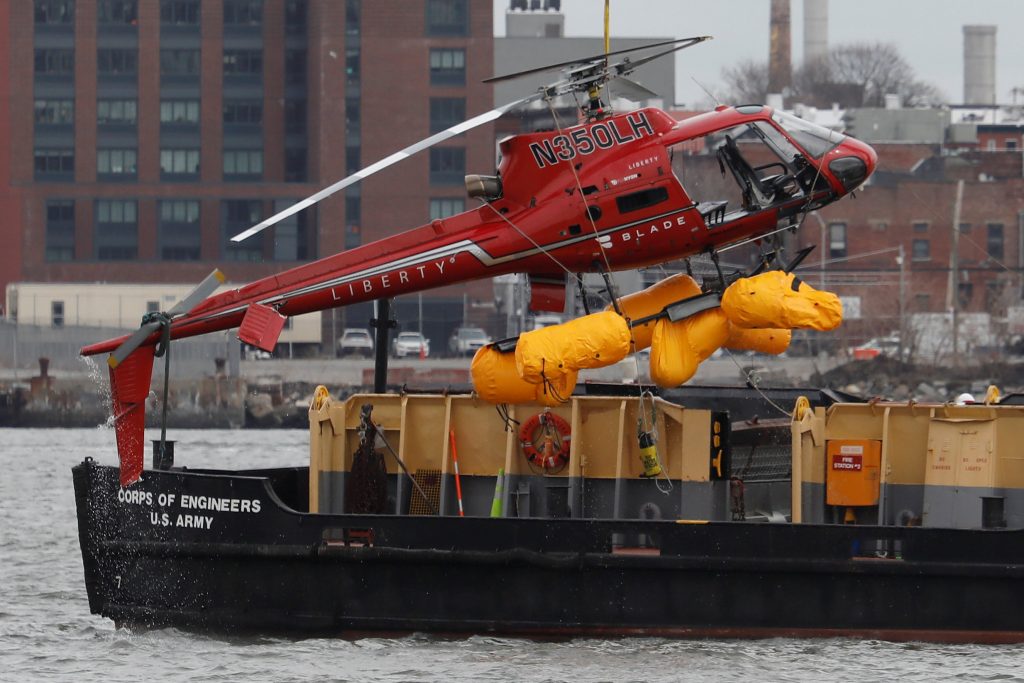 A Texas firefighter, an Argentine woman and a video journalist were among five passengers killed when a helicopter plunged into New York City’s East River, with the pilot reporting the engine had failed.

Investigators began working Monday to determine what caused Sunday night’s crash. It killed everyone aboard except the pilot, who managed to free himself as the helicopter flipped over and rapidly sank into the water.

As the aircraft foundered, he made a mayday call and added: “East River — engine failure.”

The slain passengers included Fire-Rescue Officer Brian McDaniel, 26; Trevor Cadigan, 26, a video journalist who hailed from Dallas but had recently worked at a business news site in New York; Carla Vallejos Blanco, 29, who was from Argentina, according to its consulate; as well as Daniel Thompson, 34 and Tristian Hill, 29.

McDaniel had been with the Dallas Fire-Rescue Department since May 2016.

“Despite his short tenure, hearts are heavy with grief,” the department said in a statement.

Cadigan had most recently been an intern at Business Insider until a few weeks ago.

“He was a smart, talented, and ambitious young journalist and producer who was well-liked and made a big contribution,” the news site said in a statement

A 2016 graduate of Southern Methodist University, he had previously freelanced with an entertainment and culture site managed by the Dallas Morning News, writing and producing videos on such topics as craft beer, and interned with his hometown’s WFAA-TV. His father, Jerry, is the station’s production manager.

The Eurocopter AS350 helicopter had been chartered for a photo shoot. It went down about 7 p.m. in the water near New York’s mayoral residence.

As the aircraft foundered, the pilot was heard on an emergency radio transmission calling: “Mayday, mayday, mayday.”

The pilot was rescued by a tugboat, but emergency divers had to remove the passengers from tight safety harnesses while they were upside down, Fire Commissioner Daniel Nigro said.

“It took a while for the divers to get these people out. They worked very quickly, as fast as they could,” Nigro said. “It was a great tragedy that we had here.”

The National Transportation Safety Board dispatched investigators on Monday. Several officials in NTSB jackets looked on from a dock as police divers went into the water around the submerged chopper, apparently to hook it to a crane that would lift it from the water.

The cause of the crash has not yet been determined.