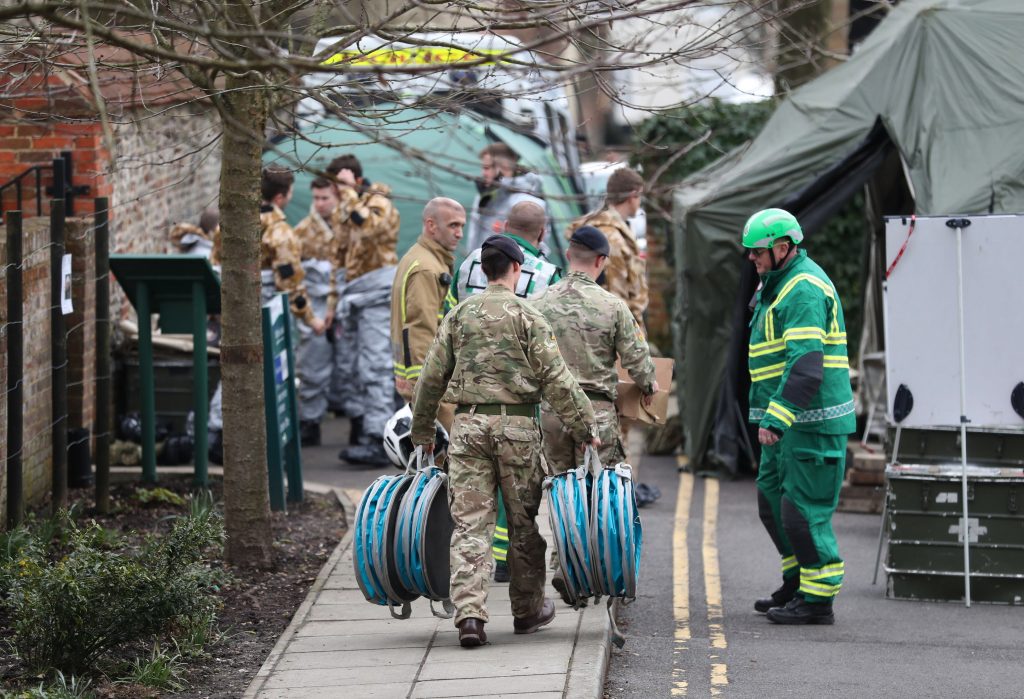 Since a former Russian double agent and his daughter were poisoned in Britain a week ago, suspicions about Russia’s possible handiwork have run high — except in major Russian news outlets, where fingers point in the other direction.

Sergei Skripal, a former officer in Russia’s military intelligence service GRU who was convicted in Russia of spying for Britain, and his adult daughter were found comatose on March 4 in the English town of Salisbury, where he lived after being freed in a 2010 spy swap.

While in the West suspicions about who could be responsible have landed on Russia, in that country the response has been very different.

“If you think about it, well, the only ones for whom the poisoning of the ex-GRU colonel is advantageous are the British,” Dimtry Kiselev, one of Russia’s most powerful media figures, said during his Sunday news program.

The British motive? “Simply in order to feed their Russophobia,” Kiselev posited.

Kiselev’s weekly show on state-owned Rossiya-1 channel, a mixture of admiring coverage of President Vladimir Putin and insinuations of Western deviousness and incompetence, is regarded here primarily as a voice of the Kremlin.

His segment about Skripal was in sync with a reflexive response of Russian officials to attribute nearly all criticism from the West to anti-Russia bias. The sense of Russia as the target of prejudice that unscrupulous politicians work to cultivate is a key element of Putin’s popularity as he seeks a fourth term in a March 4 election.

Former special services agent Mikhail Lyubimov was quoted in Komsomolskaya Pravda, one of Russia’s most popular newspapers, as suggesting Skripal wouldn’t have been worth the trouble of a hit.

“Skripal was sent to the West in a swap; that means he’s absolutely uninteresting to us. He’s a small-fry,” Lyubimov said.

Komsomolskaya Pravda struck an almost facetious tone in the story.

“In Foggy Albion, the latest spy scandal with anti-Russian tones has ripened,” it began. The article included a colorful Russian idiom for unfair accusations in a line that read, “It’s obvious that, following the old tradition, all dogs will be hung on Moscow.”

Russian media aimed at foreign readers have adopted the same tone of resentment and mockery as news outlets for domestic audiences.

“The British are well-known for their dramatic flair when it comes to stories of Cold War espionage and murder mystery. Think Ian Fleming, John Le Carre and Agatha Christie,” said a commentary on Sputnik News, a state-run English-language news site.

“But this week’s episode of a former Russian spy being poisoned on a public park bench in a quaint English town has suspiciously a tad too much drama about it.”

On Sunday, Kiselev suggested a possible connection between the poisonings in Salisbury, which British officials said resulted from exposure to an unspecified nerve agent.

Skripal wasn’t much use to Britain as an exposed ex-spy, but “as someone who’s been poisoned, who is ill, he’s very useful,” Kiselev said. The program included an on-the-ground report from Britain. The reporter noted that Salisbury, the town where Skripal lived and fell sick, is about a 20-minute drive from the Porton Down laboratories where Britain developed chemical and bacteriological agents.

“But in the British press and special services, there is no suspicion” of any British involvement, said reporter Alexander Khabarov.

On another state media station, Channel One, anchorman Kirill Klemeinov began a report on the case balefully. He had a public service warning, Klemeinov said, for anyone who dreamed of a career that followed in Skripal’s footsteps.

“The profession of a traitor is one of the most dangerous in the world,” he said. “It’s very rare that those who chose it have lived in peace until a ripe old age.

“Alcoholism, drug addiction, stress and depression are inevitable professional illnesses of a traitor, resulting in heart attacks and even suicide,” Klemeinov said.