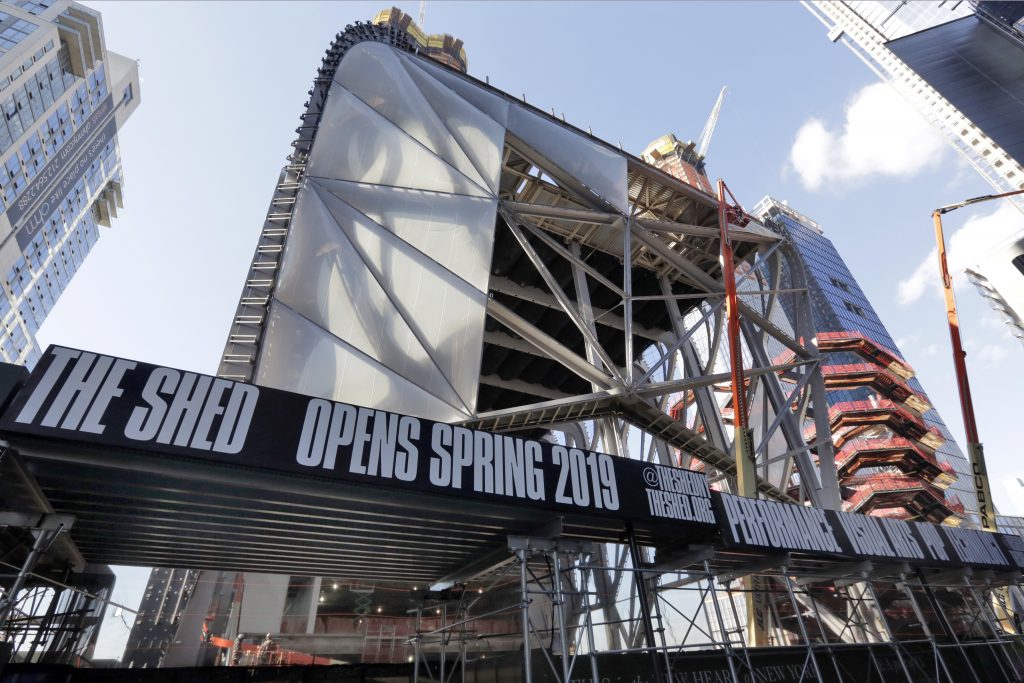 The city’s bid to host the 2012 Olympics in a rebuilt neighborhood of rail yards and industrial buildings never came to fruition, but the massive Hudson Yards project rising there now isn’t suffering from a lack of Olympic-size ambition.

After five years of construction, a $25 billion mini-city has been taking shape on Manhattan’s West Side where officials once wanted to build an Olympic and football stadium.

The development, which will include a hotel, a school, a retail mall, restaurants, public plazas and a skyscraper taller than the Empire State Building, is intended to transform what was one of the last underused, industrial stretches of Manhattan into a destination like Rockefeller Center.

And there’s hope a performing arts center being built in the area called The Shed will make it a cultural draw.

The four-story-high building, now partially complete, is equipped with a mechanical marvel: a giant telescoping shell that can be extended to turn an adjacent, public open-air plaza into a climate-controlled performance hall with 120-foot ceilings.

Made of a steel frame covered by translucent panels, the shell rests on giant wheels that slide along rails to move it out to cover the plaza, which then becomes a space called The McCourt, named in honor of businessman Frank McCourt Jr., who donated $45 million to the project, an independent non-profit cultural organization. The shell deploys in five minutes, at a speed of a quarter-mile per hour.

When in use, the shell can hold an audience of 1,250 seated or 2,700 standing, which can come up to 3,000 when combined with space from the fixed building.

At a presentation to announce part of the performance schedule for The Shed’s inaugural 2019 season, Robert Katchur, an associate principal at Diller Scofidio and Renfro, the design firm that in collaboration with Rockwell Group came up with the concept of the shell, said the idea was to give the art presented there as much room as possible, instead of being limited to the space in the fixed building alone or to an open-air plaza that could be used only in good weather.

“We wanted it to be able to engage with the public realm,” he said.

When not being used, the shell will be “nested” over the fixed structure, which is next to a residential skyscraper also designed by Diller Scofidio and Renfro and Rockwell Group.

“If the range of artists that we present represent the range of society, then you have a chance of welcoming people from all over the place,” said Alex Poots, the founding artistic director and CEO of The Shed.

The Hudson Yards site and its environs today is still a hive of construction activity. The skeleton of The Shed and its telescoping shell are both in place. External cladding is underway.

Nearby, the steel structure of another centerpiece at the site — a 150-foot climbable sculpture called The Vessel, made up of 154 twisting flights of stairs — has topped out.

Both attractions are ringed by finished and unfinished skyscrapers, including 30 Hudson Yards, which is well on its way to its planned height of 1,296 feet.

Making Hudson Yards a must-visit place has always been the plan for its developers, Related Companies and Oxford Properties Group.

That part of Manhattan has already gained immensely in popularity in recent years thanks to the High Line, an old, elevated rail line that was turned into a strollable green oasis stretching about 1 1/2 miles. The High Line wraps around the Hudson Yards complex.

It has also become much more accessible, thanks to the opening of a subway station and the extension of the 7 train line.

When Hudson Yards is fully complete, sometime in the first part of the next decade, developers say there will be 18 million square feet of residential and commercial space, as well as 14 acres of public space.