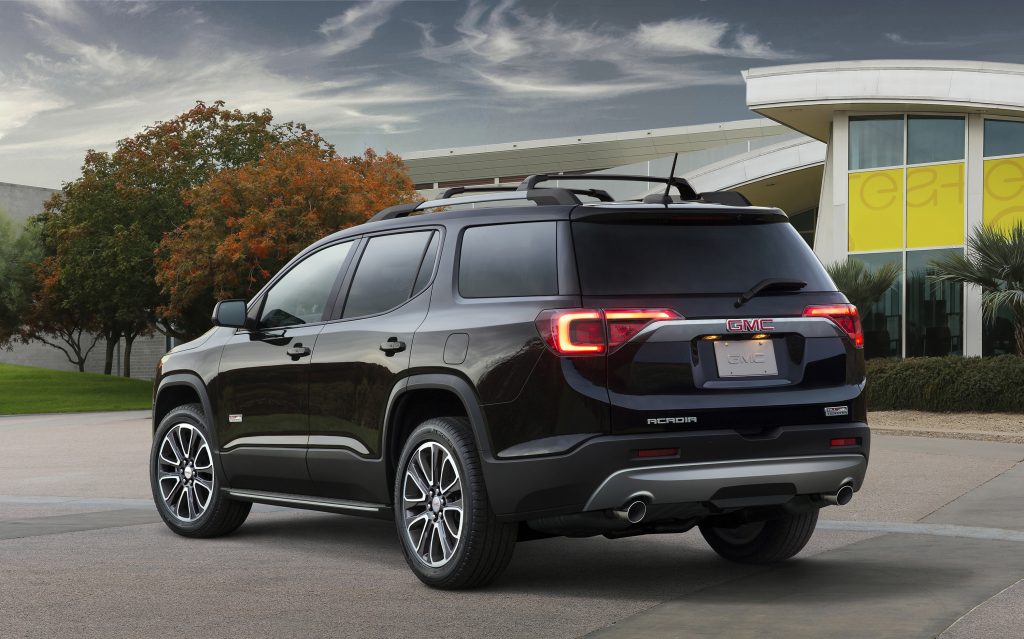 Just last year GMC redesigned the Acadia large family crossover, downsizing it a bit and adding features, technology and even a new All-Terrain package that gives it improved off-road capability.

While base models come with a standard four-cylinder engine, our SLT-1 All-Terrain version came with the uplevel 3.6-liter V-6, along with leather upholstery, all-wheel drive and special badges.

All-Terrain is also offered on the less expensive SLE trim (base price $38,500), and can be configured for five, six or seven passengers. Standard on the SLE model is the four-cylinder engine.

Our SLT-1 All-Terrain came with the seven-passenger seating, which included a three-person bench seat in the middle row and a two-person bench in the third row.

There also are special All-Terrain interior accents, covered storage bins and, on five-passenger models, a cargo-management system in the rear cargo floor in place of a third-row seat.

For the All-Terrain, there is a special advanced AWD system with Active Twin Clutch that is designed to optimize traction for every condition it encounters, GMC says. On the drive-mode selector, the usual Off Road setting is replaced by the All-Terrain mode, which is meant to enhance the vehicle’s hill-climbing abilities.

There are driver-selectable terrain settings for five different types of surfaces, set by a rotary switch to the left rear of the gear shifter on the center console. The AWD disconnect mode disconnects the rear axle from the drive system to save fuel.

Even with the All-Terrain’s AWD, the Acadia isn’t meant for serious trail-driving, as the vehicle does not have sufficient ground clearance, off-road tires, or low-range gearing for tackling extreme trails.

Still, we did enjoy taking the Acadia All-Terrain on some unpaved state and national park/forest routes that were decently maintained, including some sand, steep hills and not-too-big rocks. It handled those chores well.

Besides the 20-inch wheels, our All-Terrain also featured a body-color grille surround and dark-chrome exterior trim.

This newest Acadia, which departs from the design of its former siblings, the Chevrolet Traverse and Buick Enclave, has a starting price of $29,000 (plus freight) for the base SL front-drive version. Prices range as high as $47,100 for the top-of-the-line Denali version with all-wheel drive and the V-6 engine.

It’s not as big as before, but the new Acadia can still be configured to seat up to seven passengers in most trim levels. A six-passenger version is available, using three rows of seats, with a pair of captain’s chairs in the middle row, instead of the standard three-person bench.

After the downsizing, the Acadia moved into the midsize crossover segment along with the Honda Pilot, Toyota Highlander, Nissan Pathfinder and Acura MDX, among others.

This newest version is seven inches shorter than the previous model, but there is still plenty of interior space. There’s even plenty of knee room for the middle-row passengers, although the third row is a bit tighter. It’s one of the most-comfortable family crossovers on the market, with a smooth and quiet ride even on some rougher roads.

Acadia’s base starting price is about $1,900 less than that of the previous generation, even though the new model comes with more standard equipment, including a new IntelliLink infotainment and connectivity system that includes Apple CarPlay and Android Auto compatibility.

The base engine is a new 2.5-liter Ecotec four-cylinder with 194 horsepower and 190 foot-pounds of torque, connected to a six-speed automatic transmission. It’s the first four-cylinder for the Acadia, which has been on the market since 2007 with only V-6 power.

The 3.6-liter V-6, which cranks out 310 horsepower and 271 foot-pounds of torque, is available for $1,095 extra on the SLE 2 and front-drive SLT 1 model, and standard on the SLT 1 all-wheel drive, SLT 2, All-Terrain and Denali models. It also comes with a six-speed automatic transmission.

There’s not a big difference in fuel economy between the two engines, with a slight savings on the city numbers, rather than the highway ratings, for the four-cylinder. The four-cylinder is rated at 21 mpg city/26 highway with front drive, and 21 city/25 highway with all-wheel drive; the V-6 is rated at 18 city/25 highway/20 combined with either front- or all-wheel drive.

With the V-6 engine, the Acadia can tow trailers weighing up to 4,000 pounds, with the optional towing package, which was included on our All-Terrain tester ($650) extra). Four-cylinder models are limited to just 1,000 pounds.

We drove the All-Terrain in the Appalachian Mountains of East Tennessee and Southwest Virginia, and found that the V-6 engine provided plenty of power for the hills we encountered.

Among exterior features of the SLT All-Terrain are projector-beam headlights (with automatic high beams), deep-tinted glass, power rear liftgate, and power-adjustable (manual folding) heated outside mirrors with auto-dimming on the driver’s side.

We also had the Crimson Red Tintcoat exterior paint ($495). The interior was Jet Black/Kalahari.

The navigation system wasn’t as detailed as some of the others I’ve tested recently, as the names of streets I was approaching didn’t appear until I was almost right on them. It’s nice to have some advance notice of the street you’re looking for coming up ahead.

There’s plenty of room in the cargo area when this vehicle has no third-row seat or that seat is folded out of the way – 41.7 cubic feet.

The split-folding second-row seat improves on the original Smart Slide feature of the previous generation. The curbside seat can slide and tilt forward, even with a forward-facing child seat in place. The seat on the driver’s side tips and slides forward for access to the third row.

And the 50/50-split third-row seat folds flat to expand the cargo area behind the second row. With the middle row also folded, the cargo space expands to 79 cubic feet.

At the rear of the center console is a pullout storage drawer accessible to middle-row passengers. It’s designed for electronic devices and small toys to be stored out of sight, for greater security and reduced clutter, the automaker says.

Highlights: The redesigned and slightly downsized Acadia family crossover made its debut for 2017, with still an option for three rows of seating, but now the choice of a four-cylinder engine or a more-powerful V-6. It has new styling, lots of standard and optional amenities, and available all-wheel drive.

Negatives: A bit noisy in the cabin at highway speeds; six-speed transmission is a bit dated.