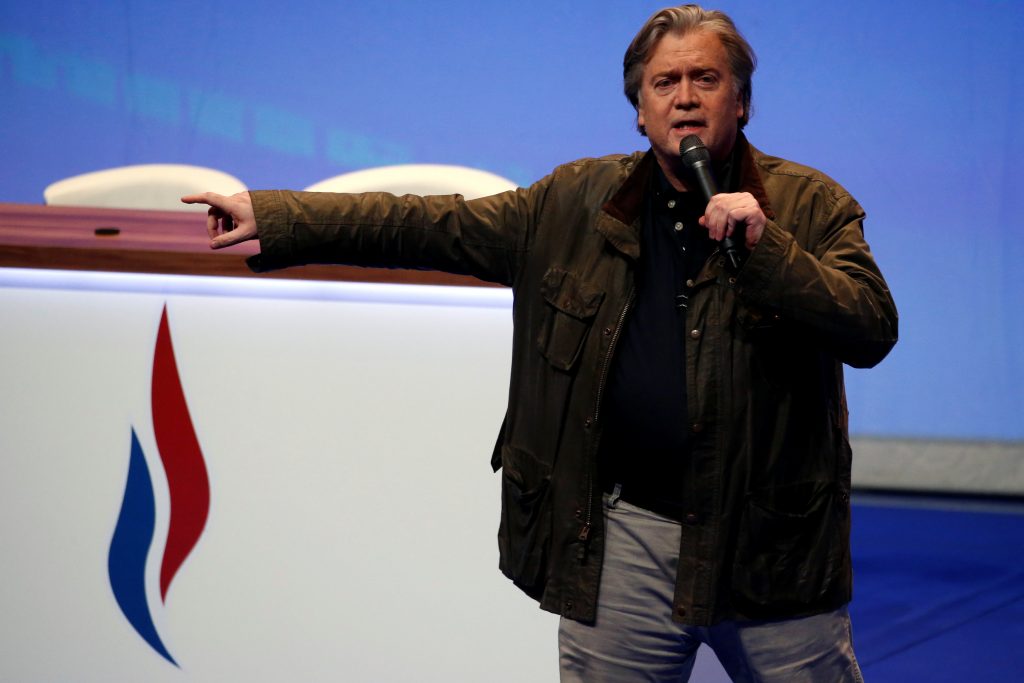 Despite her troubles, Marine Le Pen was re-elected to a new term as party president at a congress where she was the only candidate for the post. National Front members also approved a new leadership structure and a 100-member governing council was named.

A new name to be announced during a speech by Marine Le Pen will cap what the party calls its “re-foundation” and close the two-day congress. She has already said that she dislikes the word “front” because it evokes the past she is trying to move away from.

The new moniker must be approved by members during a mail-in vote. Jean-Marie Le Pen, who co-founded the National Front in 1972, has called a name change a betrayal.

The anti-immigrant party won a boost from a guest star appearance at the congress Saturday by former White House strategist Steve Bannon. He told National Front members that “history is on our side.” He also said: “Let them call you racist. Let them call you xenophobes. Let them call you nativists. Wear it as a badge of honor.”

Party members approved new bylaws aimed at restructuring after internal divisions — and that include abolishing Jean-Marie Le Pen’s position of party president for life. The party tweeted Sunday that more than 79 percent of participants approved the new statutes.

The political mainstream was skeptical about any real change coming out of the congress.

“You can change the name, the logo, the wallpaper, but in the end it is a little family enterprise which serves the interests of the family Le Pen for 50 years now,” government spokesman Benjamin Grivaux on CNews said. “Basically, nothing changes.”

Removing the final ties of Jean-Marie Le Pen was a major move. He didn’t attend the congress.

The party expelled him in 2015 over anti-Semitic remarks, but he kept the honorary position. Sunday’s vote is a crushing blow for the 89-year-old Le Pen, who founded the party in 1972 and was the surprise runner-up in the 2002 French presidential election.

Father and daughter Le Pen have waged a bitter power struggle since he named her to succeed him in 2011. The elder Le Pen has been convicted multiple times for racism and anti-Semitism, and his positions complicated his daughter’s efforts to clean up the party’s image and expand its base into disillusioned mainstream French voters.

Abolishing the honorary position is an effort to bypass court rulings that he should be able to maintain his status as honorary party president for life.