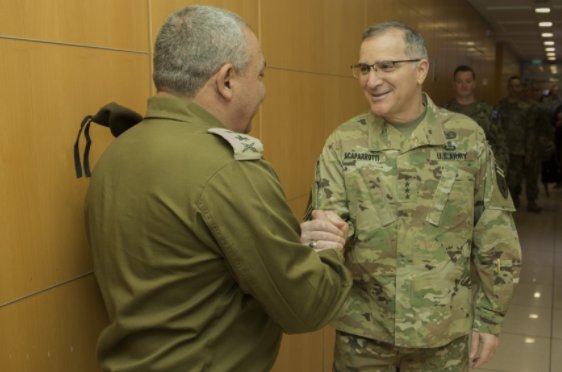 While visiting the army’s Tel Aviv headquarters Sunday, Scaparrotti pledged to support the IDF in times of crisis.

“The U.S. is deeply committed to the defense of Israel. We will continue to work alongside the IDF to promote stability throughout the region, not only for the purposes of this exercise, but in the event of any real-world contingency,” said Scaparrotti.

“During the meeting, the commanders discussed the current situation in the Middle East and the evolving threats, as well as opportunities, including the strategic military cooperation,” the IDF said in a statement.

“General Scaparrotti’s visit proves once more the commitment of the United States to the security of the State of Israel. This is the ninth time that the IDF and the US military have trained together in the Juniper Cobra exercise. This training is intended to improve our ability to defend against missile and rocket threats and to advance the capabilities of both forces against various threats,” Eisenkot said during the meeting.

During his visit, Scaparrotti is to meet with U.S. Ambassador to Israel David Friedman, as well as other military and civilian officials from both the U.S. and Israel.

Scaparrotti said he believes in the benefits of conducting joint exercises, and that training together only strengthens their existing defense relationship.

“We will continue to work alongside them to promote stability throughout the region, not only for the purposes of this exercise, but in the event of any real-world contingency,” Scaparrotti said.