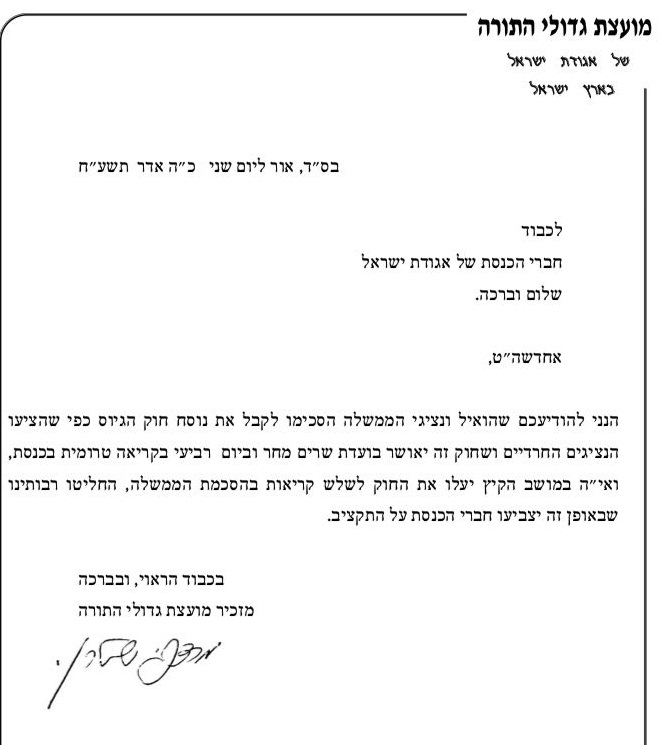 The Knesset coalition agreed late Sunday to a draft law that eliminates any sanctions against yeshivah students if the quota of chareidi inductees to the IDF isn’t filled.

The deal was reached hours after the Moetzes Gedolei HaTorah had rejected an earlier proposal, which would have required 3,800 chareidi inductees each year; if the quota were not met, the law would automatically be canceled, leaving the yeshiva bachurim subject to the draft and possible arrest for evasion.

Late Sunday night, Prime Minister Binyamin Netanyahu and Deputy Health Minister Rabbi Yaakov Litzman (UTJ) met and hammered out an agreement, under which there will be no sanctions if the quota of chareidi inductees is not filled. Should the quotas not be met, the law would be voided and the Knesset would have a year to pass a new law. It is now set as a goal to be revisited by the government in five years.

The new agreement averts a coalition crisis, possibly allowing the coalition to be maintained until the next scheduled elections in November 2019. An agreement with Defense Minister Avigdor Liberman is still being negotiated.

Per the agreement, the law will pass the Ministerial Committee vote Monday and the initial reading Wednesday. The chareidi MKs will then agree to vote for the budget bill. The chareidim had been holding up the vote on the budget bill until a deal on the draft could be reached.

Second and third readings of the draft law are expected to be held in the summer session.