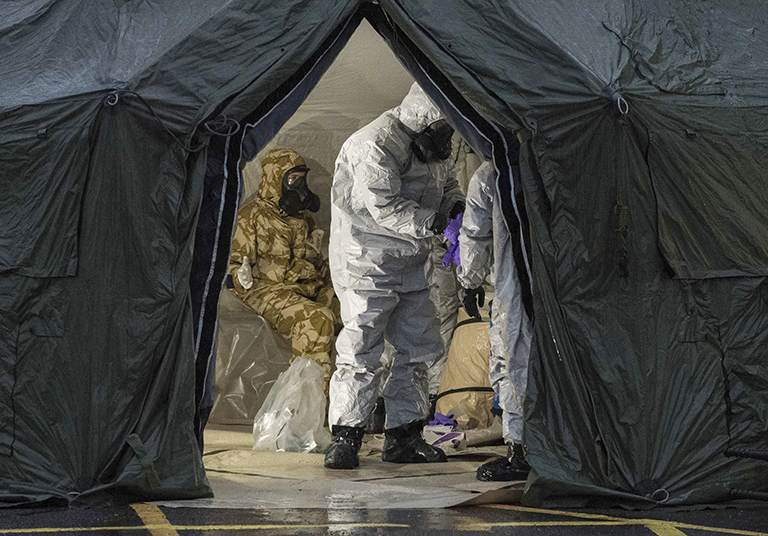 British government security ministers held an emergency meeting Saturday to discuss the poisoning of a Russian who spied for Britain as police backed by soldiers continued to search the English town where he was attacked with a nerve agent.

Home Secretary Amber Rudd said after the meeting it was still “too early” to say with certainty who was behind the poisoning that left former Russian military intelligence agent Sergei Skripal and his daughter in critical condition.

Rudd said the investigation has been painstaking and involved more than 250 counterterrorism officers. More than 240 pieces of evidence have been collected and 200 witnesses have been identified, she said.

“I want to stress that they are proceeding with speed and professionalism,” said Rudd, who oversees domestic security in her Cabinet post. “We are putting in enormous resources to ensure that they have all the support that they need to do that.”

The meeting was similar to the ones convened after terrorist attacks and other threats to Britain’s national security. It covered the latest police and intelligence reports from the town of Salisbury, where the military-supported investigation has turned to the cemetery where the ex-spy’s wife and son are buried.

Police are looking for clues to what sickened Skripal, 66, who in 2006 was convicted in Russia of spying for Britain, and his daughter, Yulia, 33. The father and daughter were found unconscious March 4 on a bench in Salisbury; Skripal lived in the town, located 90 miles southwest of London.

A local restaurant and and a popular eatery have been searched and remain closed to the public. Anti-contamination measures have been taken at places the father and daughter visited before they fell ill. Police in hazardous material gear also are collecting evidence from Skripal’s house, as well as at the gravesites of Skripal’s son and wife.

Skripal had his sentence cut short and was released from prison in 2010 as part of a spy swap. The former intelligence agent lived out of the public eye in Salisbury.

Detective Sgt. Nick Bailey, who has been hospitalized since helping the Skripals, released a statement Saturday saying he was “merely doing his job” and does not consider himself a hero.

Bailey is recovering and is well enough to sit up and talk with his family, according to Rudd.

Police have not released details about the specific nerve agent used in the attack. One theory is that the Skripals were poisoned in his house before visiting the restaurant and becoming ill.

British officials say there is not a public health threat but some residents have become alarmed by the site of investigators wearing extensive hazardous material protection gear.

About 180 marines, soldiers and air force personnel with expertise in chemical weapons, decontamination and logistics have been called in to help with the probe and to remove vehicles that may have become contaminated.