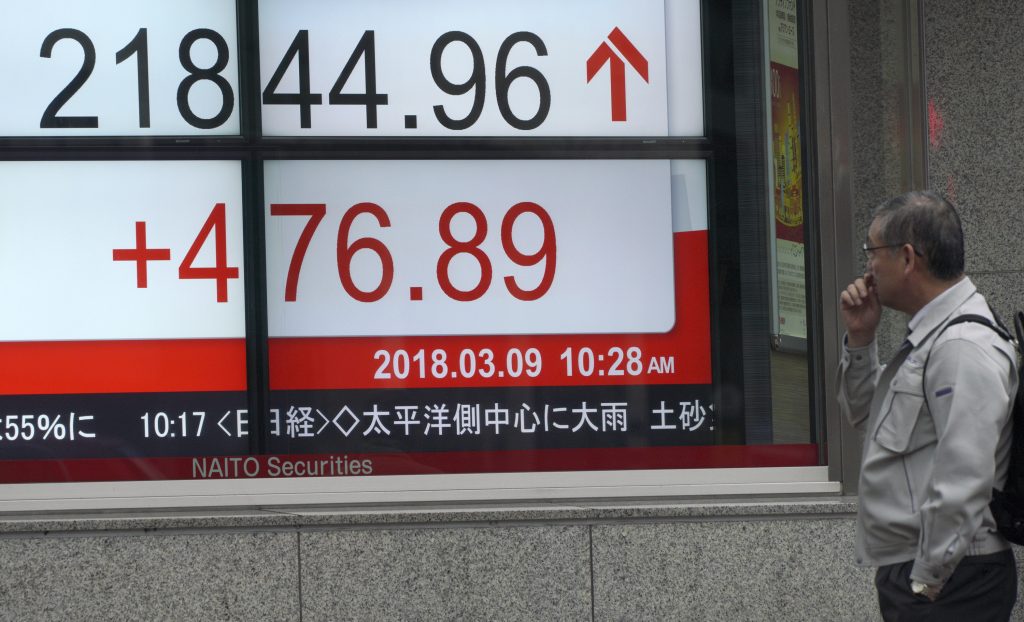 Asian shares pared sharp early gains on Friday ahead of U.S. payrolls data, which could hasten Federal Reserve rate hikes, and as some caution set in about the new entente between North Korean leader Kim Jong Un and President Donald Trump.

Kim has committed to “denuclearization” and offered to hold the first-ever U.S.-North Korea summit, marking a potentially dramatic breakthrough in the North Korea nuclear standoff.

President Trump’s aides have been wary of North Korea’s diplomatic overtures because of its history of reneging on international commitments.

“Whether it comes to anything remains to be seen as we have seen this happen several times over the decades,” said Shane Oliver, Sydney-based chief economist for AMP.

“Or maybe its development of nuclear weapons was all just negotiating ploy. At least it will be ‘quiet’ on this front for a while yet.”

The jubilation about the informal alliance did not last long as equity investors booked profits while futures for the S&P 500 and FTSE inched lower.

Japan’s Nikkei was last 0.3-percent firmer, having been up more than 2 percent at one stage. South Korean stocks eased too but were still 1 percent higher.

“What seems certain is that over the coming 6 to 9 months, unfolding negotiations should ensure greater geopolitical tranquility on the Korean peninsula,” said Aninda Mitra, senior sovereign analyst, BNY Mellon Investment Management. “The main risk is, of course, [if] Trump mishandles the potential for a breakthrough resulting in [an] even [more] heightened risk of a mishap.”

The mood had already brightened a little after President Trump pressed ahead with tariffs but offered conditional exemptions for Canada and Mexico, offering at least the hope that a full-blown global trade war could be averted.

The White House said other countries could apply for exemptions on the 25-percent tariff on steel imports and 10 percent for aluminium, but details were sparse on when they might be granted and under what terms.

Several major trading partners have said they will respond with tariffs or direct action of their own.

“Markets have cheered up a little but exclusions are likely to come with caveats demanding reciprocity – that’s the kind of guy the president is,” said Greg McKenna, chief market strategist at broker AxiTrader.

Rising protectionism was a risk cited overnight by European Central Bank President Mario Draghi following the central bank’s latest policy meeting. While the ECB did drop its easing bias as some expected, Draghi sounded in no rush to start unwinding stimulus.

The dollar gained 0.4 percent on the yen to 106.63, amid the recovery in risk appetite.

There was little immediate reaction to the Bank of Japan’s latest policy meeting where it chose to maintain its massive stimulus campaign unaltered.

Investors will next focus on the U.S. jobs report for February due later in the day. The consensus expectation for average hourly earnings growth for the month is for a 0.2-percent increase, while the headline nonfarm payrolls is seen to have grown by 200,000 jobs, according to a Reuters poll.

It was the upbeat jobs data last month that fanned speculation of faster rate rises in the United States, causing a rout in the bond market and hammering world equities. The Fed is widely expected to raise rates at least three times this year, with some analysts expecting even four.

Spot gold eased 0.3 percent to $1,317.74 per ounce, extending losses into a third session as demand for safe havens lessened.