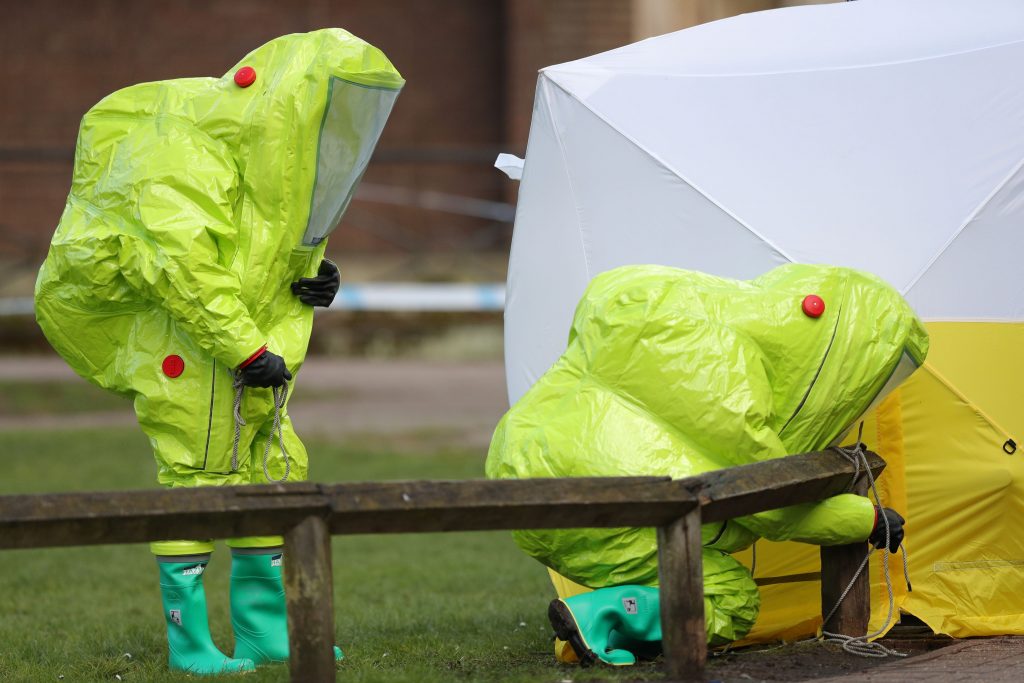 A British police official on Thursday updated the number of people who sought treatment after a nerve agent attack on an ex-Russian spy, saying “around 21” had been given medical help and support.

Only three people remain hospitalized after the poisoning Sunday in the southern English city of Salisbury — ex-spy Sergei Skripal, his daughter Yulia and a British police officer who tried to help them. Health officials insist there has only been a low risk to the public.

Authorities haven’t said who launched the attack, but U.K. officials have warned of a strong response if the Russian government is found to be responsible.

“Multiple people have been treated, around 21 people, including the man and the woman found on the bench,” Wiltshire acting police chief Kier Pritchard told Sky News, referring to Skripal and his daughter, who were found unconscious.

Pritchard said that of the new total, “a number” of them got hospital treatment including blood tests, support and advice. Previously, authorities had said only that “several” people had sought treatment.

Police haven’t provided details on the nerve agent that was used, and the ex-spy and his daughter remain in critical condition.

British Home Secretary Amber Rudd said whoever is behind the attack is guilty of a “brazen and reckless act.” She said Britain would respond strongly when it is clear who’s to blame.

She said that enormous resources were being used to determine who poisoned Skripal, 66, and his 33-year-old daughter Yulia. They were found unconscious on a bench, triggering a police inquiry headed by counterterrorism detectives.

A police officer who came to their aid is hospitalized in a serious condition, though he is conscious and talking, Rudd said. He was identified Thursday as Sgt. Nick Bailey.

“The use of a nerve agent on British soil is a brazen and reckless act,” Rudd told Parliament. “This was attempted murder in the most cruel and public way.”

The Russian Embassy in London, which has mocked other British politicians for suggesting Russian involvement, tweeted that it agreed with Rudd: “First evidence then conclusions on Mr. Skripal’s case. Responsible political approach.”

Police have refused to publicly speculate on who is behind the attack, but many experts have focused on Russia because of the similarity to the 2006 killing of another former Russian spy who was poisoned in London with radioactive polonium-210.

Chemical weapons expert Richard Guthrie of the research project CBW Events, which records the use of chemical and biological weapons, said the highly public attack appeared to be “an expression of power” intended to send a message.

“There’s echoes of Litvinenko — you are doing it in a way that makes it obvious you’re doing it,” he said.

Russia is “obviously a clear candidate,” but it is too soon to say who was behind the attack, Guthrie added.

“It’s also possible there could be some troublemaker out there who wants to make it look like it was Russia,” he said.

Nerve agents are chemical compounds that block nerve cells from sending messages to each other and the organs, preventing the body from working normally. They can be administered in gas or liquid form, causing symptoms including vomiting, breathlessness, paralysis and often death.

The Organization for the Prohibition of Chemical Weapons, the global chemical weapons watchdog based in The Hague, said Thursday the Skripal case was “of great concern,” adding that it was in touch with British authorities over the attack.

Sally Davies, the chief medical officer for England, has said there was a low risk to the public, but experts say that nerve agents are highly dangerous and volatile.

“Nerve agents are not materials that can be made at home,” said Andrea Sella, a chemistry professor at University College London. “Their level of toxicity is such that they are only to be manufactured in specialized facilities.”

Sella said authorities will be looking to find impurities and residues that might provide clues to the precise chemical process used to manufacture the material. He added that if authorities found the container used to deliver the material, “it might well be possible to trace the origin of the substance.”

Police and forensics officers are searching Skripal’s home in Salisbury, a medieval city known for its towering cathedral, located 90 miles southwest of London, as well as a pub and a restaurant he and his daughter are believed to have visited Sunday.

Skripal, a former colonel in Russia’s GRU military intelligence service, was convicted in 2006 of spying for Britain and imprisoned. He was freed in 2010 as part of a widely publicized spy swap in which the U.S. agreed to hand over 10 members of a Russian sleeper cell found operating in America in return for four Russians convicted of spying for the West.

Those who knew him in Salisbury were shocked, describing him as friendly and outgoing — hardly a man hiding out.

The owner of a local convenience shop frequented by Skripal described him as one of her favorite customers. Ebru Ozturk said she made sure to stock the food he liked,.

“Usually he plays lottery and scratch cards,” said Ozturk, 41. “Plus a few weeks he was lucky as well and laughed about it.”