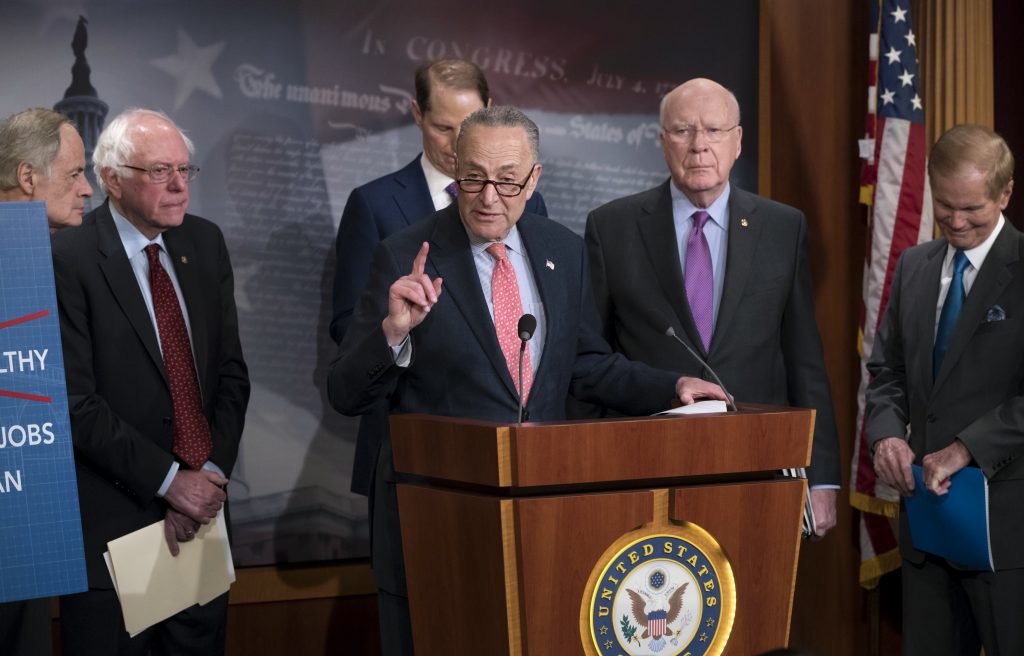 President Donald Trump has threatened to veto an entire government-wide spending measure if it includes money for a rail tunnel under the Hudson River between New York and New Jersey.

The project is a priority for Trump’s most powerful Democratic rival, New York Sen. Chuck Schumer.

GOP congressional aides say Trump indicated to House Speaker Paul Ryan last week that he would veto the spending bill over money for the multibillion-dollar project, which enjoys GOP backing as well.

The aides spoke on condition of anonymity to describe private conservations.

Trump brought up the project with Ryan, R-Wis., before the start of last week’s ceremony in the Capitol Rotunda commemorating Rev. Billy Graham, they said.

Trump’s threat further complicates already difficult negotiations on the spending bill. A fight over Democratic opposition to Trump’s U.S.–Mexico border wall is another of several hangups as closed-door negotiations on the $1.3 trillion bill are coming to a head.

The House Appropriations Committee chairman, Rep. Rodney Frelinghuysen, R-N.J., is seeking a $900 million installment for the tunnel. But some lawmakers want the money spread to other projects, and the House approved the money in a vote last year.

Trump’s home is in Manhattan, and he spoke favorably of the project in a White House meeting on infrastructure last September, Schumer and other lawmakers say. At that same session, Trump took Schumer aside and offered to trade the Hudson River project for border wall money, according to a source familiar with their conversation who spoke on condition of anonymity to describe the private discussion. Schumer refused.

Schumer’s position on money for the border wall has softened since he blocked it during talks last spring on a major spending bill. He has supported the money as part of legislation to offer protection to young “Dreamer” immigrants, who were brought to the U.S. illegally as children, but that effort foundered last month.

Trump’s opposition to the Gateway Project is a more recent development.

“This is vitally important to the Northeast corridor and to the entire U.S. economy,” Schumer said in a statement. “Jobs, income, and growth are all at stake. No one should be playing politics with it.”

The White House didn’t threaten to veto the tunnel when the GOP-controlled House voted on it in September. But Transportation Secretary Elaine Chao came out strongly against the money in a combative House hearing this week, telling lawmakers that New York and New Jersey need to put up a greater share of the project, which could ultimately cost $30 billion or so.