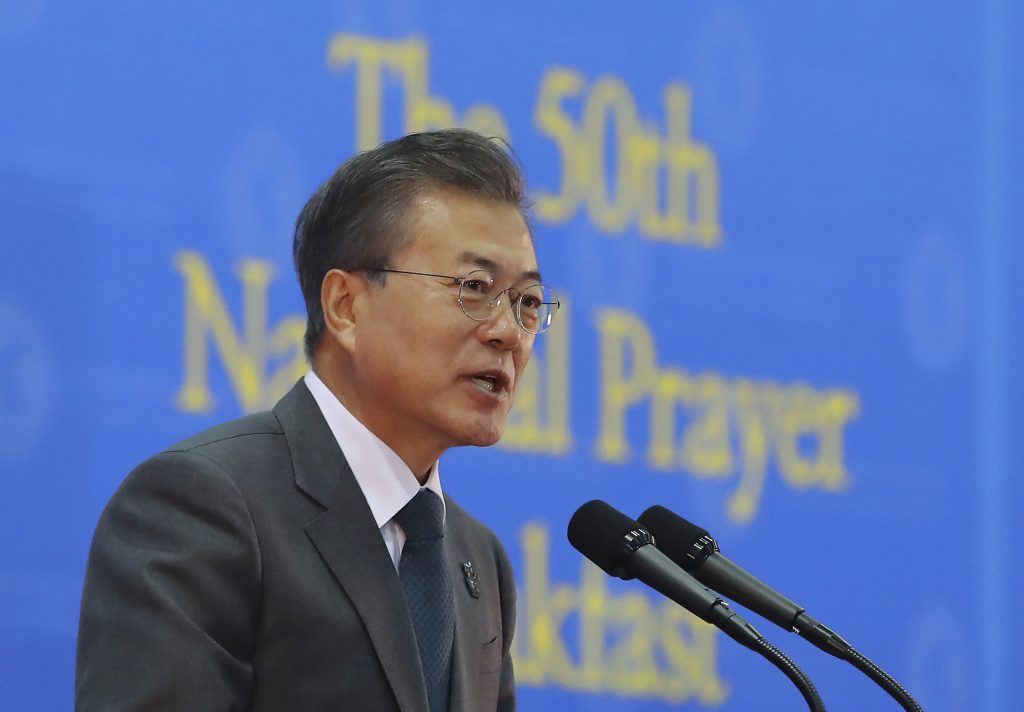 South Korea’s president said Thursday that many “critical moments” still lie ahead to end the nuclear crisis despite North Korea’s recent outreach to Seoul and Washington.

Moon Jae-in spoke before two senior Seoul officials left for the United States to brief officials about the outcome of their recent visit to North Korea.

The Seoul officials said North Korea offered talks with the United States over normalizing ties and denuclearization of the Korean Peninsula. Seoul said the North also agreed to suspend nuclear and missile tests during such future talks.

Some experts question how sincere North Korea is about its reported offers, citing what they call its track record of using past disarmament talks to wrest aid and concessions while covertly continuing its bomb program.

According to the South Korean officials, North Korea said it has no reason to possess nuclear weapons if military threats against the country are removed and its security is guaranteed. That’s the same positon North Korea has long maintained to justify its nuclear program or call for the withdrawal of 28,500 U.S. troops in South Korea and a halt to annual U.S.-South Korean military drills as conditions for scrapping its nuclear program. The North sees the allies’ drills as an invasion rehearsal.

Choi Hyunsoo, spokeswoman for Seoul’s Defense Ministry, said the military will announce the schedule for the joint drills after the Pyeongchang Paralympics, which start Friday and run through March 18.

“We’ve overcome one critical moment. But there are many critical moments that we still have to go through before reaching the denuclearization of the Korean Peninsula and a permanent peace,” Moon said in a meeting with church leaders.

Moon still described the outcome of his envoys’ North Korea trip “a big step toward denuclearization of the Korean Peninsula” that was possible with “a strong support” by the U.S. government.

It’s unclear whether the United States will accept the North’s reported offer for talks. President Donald Trump expressed both hope and skepticism, calling the North’s move “possible progress” that also “may be false hope.”

“We’ve maintained very close communication with President Moon. They are keeping us well-informed of their meetings,” he said. “We’re providing them input as well.” He said the U.S. and North Korea were still “a long ways from negotiations,” and the United States needed to remain “very clear-eyed and realistic.”

South Korea and the U.S. plan to kick off their delayed springtime military drills next month, and how sensitively the North reacts will affect the mood of reconciliation that was revived by North Korea’s participation in last month’s Olympics held in the South. The North has responded to past joint drills by the allies with fiery rhetoric and its own weapons tests.

China, the North’s most important ally, encouraged follow-up measures while noting the progress was in part due to the suspension of both North Korean nuclear tests and U.S.-South Korean military exercises during the Olympics.

“This proves that China’s proposal of suspension for suspension was the right prescription for the problem and created basic conditions for the improvement of inter-Korean relations,” Foreign Minister Wang Yi told reporters in Beijing. He said North Korea’s security concerns should be addressed in return for denuclearization.

Moon and North Korean leader Kim Jong Un are to meet at a border village in late April, when the South Korea-U.S. drills would likely be still under way. If realized, the Moon-Kim meeting would be the rivals’ third-ever summit since their 1945 division.