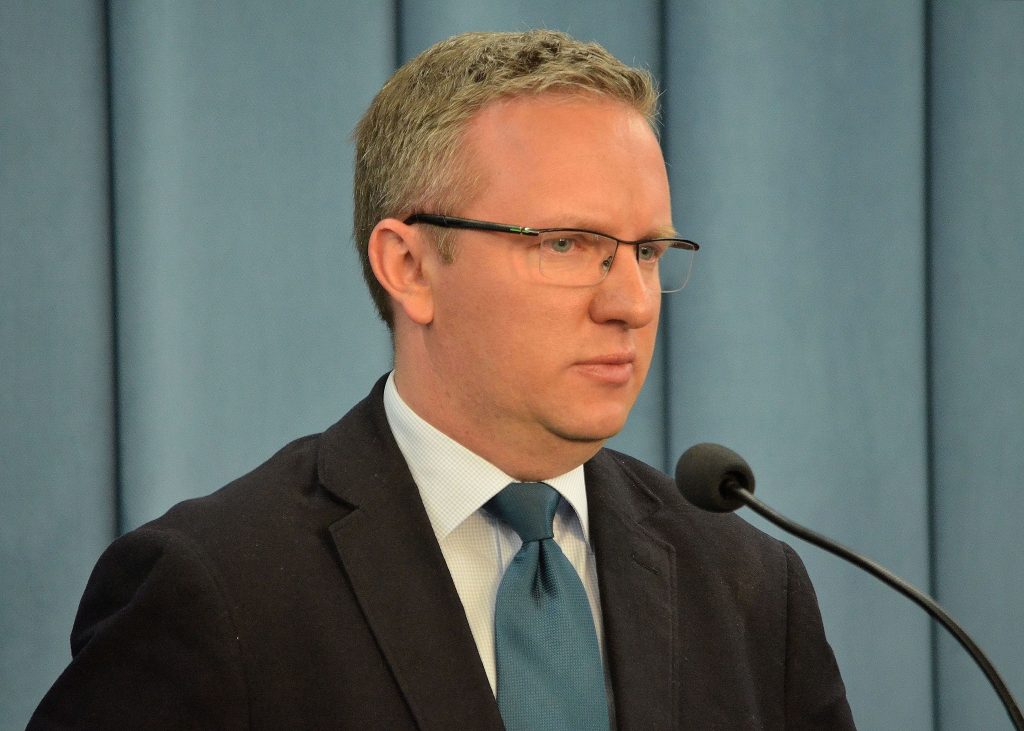 The Polish president’s chief of staff flew to Washington on Wednesday amid escalating diplomatic tensions over Poland’s “Holocaust law.”

His trip came one day after a report in Polish media detailed potential U.S. diplomatic sanctions, including the suspension of meetings between President Donald Trump or Vice President Mike Pence and Poland’s president or prime minister.

The law, which has drawn sharp condemnation from the United States, Israel and much of the international community, criminalizes speech that accuses the Polish nation of complicity in Nazi atrocities. The Israeli government has likened the bill to Holocaust denial, and the United States to an attack on freedom of speech.

As he prepared to fly to Washington, Krzysztof Szczerski, President Andrzej Duda’s chief of staff, blasted the report, published Tuesday by the Polish news outlet Onet, as “fake news.”

The report was based on a leaked Feb. 20 memo sent from the Polish embassy in Washington to Warsaw summarizing a contentious meeting with U.S. State Department officials.

According to the report, U.S. officials, including Wess Mitchell, the assistant secretary of state for European and Eurasian affairs, warned their Polish counterparts that failing to abandon the Holocaust law would result in a suspension of highest-level bilateral contact with the White House.

The report also claimed that the U.S. officials said keeping the law in place could foster anti-Polish sentiment in Congress, which might then affect U.S. financing for shared defense and security initiatives in Poland. Finally, the U.S. officials also reportedly added that any attempt to prosecute an American citizen under the law would result in dramatic consequences.

In Washington on Tuesday, State Department spokeswoman Heather Nauert denied any security ramifications for Poland, a NATO member state. But she did not categorically deny the portion of the report about suspension of bilateral contact.

“I’m not aware of any meetings that are being discussed or scheduled at that time,” she said when asked by reporters for clarity on the issue.

On Wednesday morning, Polish Prime Minister Mateusz Morawiecki – who recently said that Jews were also “perpetrators” in World War II – denied the report. “The conversations continue as they did before,” he said.

In the Polish news media, the third alleged American injunction – to protect U.S. citizens – was seen as a defense of Jan Gross, the Polish American academic whose 2000 book on the infamous 1941 Jedwabne massacre of Jews by their Polish neighbors sparked a bitter national controversy, recently reignited by the new law.

Poland’s right-wing government, led by the Law and Justice Party, has repeatedly attacked Gross as “unpatriotic,” and the new Holocaust law enabled a lawsuit to be filed last week against an Argentine newspaper for a December article pertaining to the Jedwabne massacre.

“I see it as something that fits quite well with the ethos of the American government to keep an umbrella over citizens abroad,” said Gross, reached via telephone in Berlin, in response to the reports of threatened U.S. sanctions.

Before Poland’s president signed the law last month, U.S. officials strongly argued against it, warning about repercussions for “Poland’s strategic investments and relationships.” But U.S. diplomats have also sought to give the Warsaw government room to back away without the appearance of doing Washington’s bidding.

Christopher Hill, a former U.S. ambassador to Poland who is now with the University of Denver, called the law the “revenge of the peasants” in Poland and said the United States is trying to encourage Polish officials to correct their course on their own.

“The Poles have gotten themselves into an unnecessary box,” said Dan Fried, also a former U.S. ambassador to Poland, now with the Atlantic Council in Washington. “This law is utterly unnecessary, and yet they passed it, and now the Polish right is saying you can’t get rid of it under pressure from the outside.”