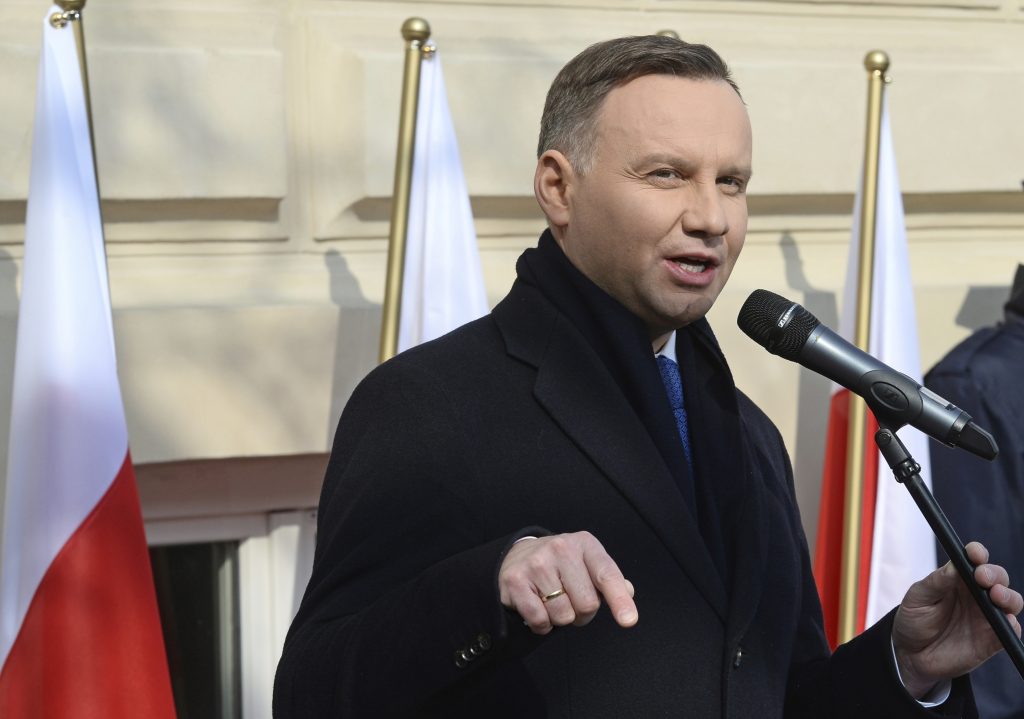 Poland’s president made an emotional plea for forgiveness on Thursday to the 13,000 Poles of Jewish origin expelled from Poland 50 years ago, and decried the loss the country suffered with their departure.

President Andrzej Duda delivered a speech to mark the 1968 mass student protests against the Moscow-backed communist regime of the time that were in turn exploited by the Communist Party to purge Jews from the party and from Poland.

Among those who were forced out were Holocaust survivors and prominent intellectuals including sociologist Zygmunt Bauman, as well as some notable non-Jewish critics of the regime, like the philosopher Leszek Kolakowski.

He said the expulsions were a “shameful act” and the departures a “loss” for Poland.

He spoke at the Warsaw University campus that was the site of the 1968 protests. A group of the current government’s opponents, many holding white roses — a symbol of their protest — chanted “disgrace,” ”hypocrite,” and “go away from the campus.”

Duda is allied with the ruling Law and Justice Party, which is blamed by critics for nationalist polices that have sparked a rise in xenophobia and a recent dispute with Israel.

In March 1968, students staged protests against censorship and in support of academic freedom that were brutally quashed by the regime.

They protested a ban on a play by the Polish Romantic-era poet Adam Mickiewicz, which was seen as having an anti-Russian message. Two of the students were expelled from Warsaw University, prompting others to hold a demonstration on March 8 in their defense, which spread nationwide.

Rival factions in the ruling Communist Party exploited the protests in their pursuit of party control, with the crisis climaxing in the purge of Jews from the party and jobs. Many lost their careers and were forced to renounce their possessions and their Polish citizenship and to leave the country.

The purge came amid the broader background of the Soviet Union cutting ties with Israel following the Six Day War of 1967.

Earlier Thursday, Duda laid flowers beneath a plaque at a railway station in Warsaw that was the departure point for some of the Jews who were expelled 50 years ago. The Israeli and U.S. ambassadors attended observances there.

Many other events were being held across the country to mark the anniversary, including lectures on the dramatic past and meetings with some of the expelled, now freely visiting democratic Poland.

However, many Polish officials are working to tamp down the emotions of the past weeks. The lower house of Parliament overwhelmingly passed a resolution Tuesday that condemned the anti-Semitic campaign and honored the anti-communist protests.

Prime Minister Mateusz Morawiecki on Wednesday denounced anti-Semitism. While claiming the legacy of the student protests for Poland, he also sought to shift the blame for the anti-Semitic purge onto Moscow, which controlled Poland during the decades of the Cold War.