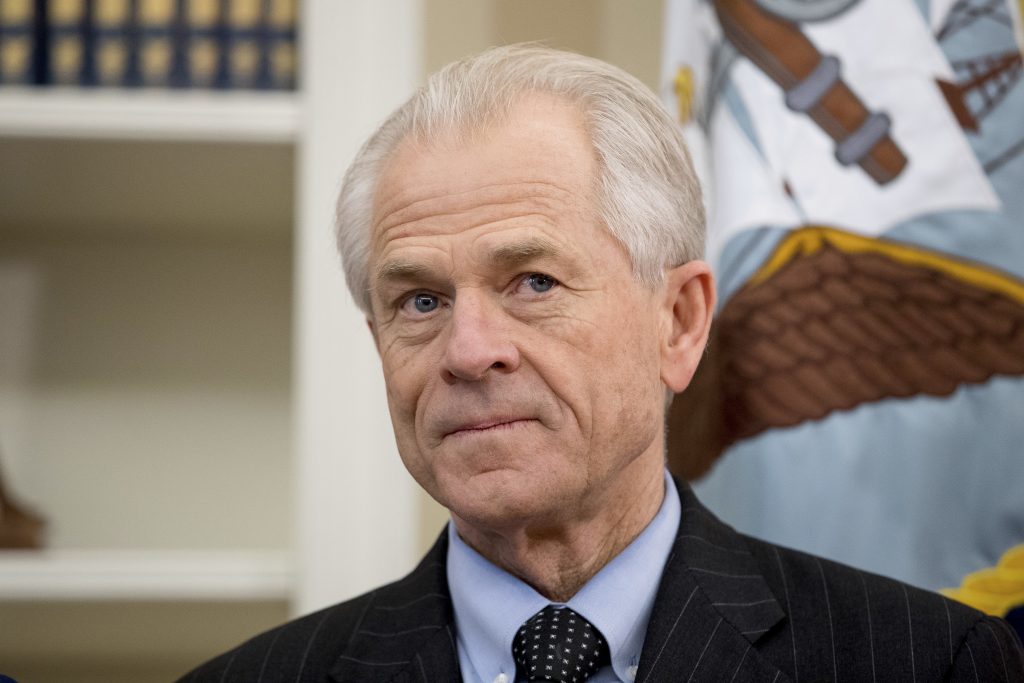 Last year he nearly disappeared from view when his small operation was subsumed under the White House’s National Economic Council, which was headed by his rival, Gary Cohn, the free-trader who was president of Goldman Sachs. Now Cohn’s on his way out while the steel and aluminum tariffs that Navarro advocates are on the verge of becoming national policy.

And he might even take over Cohn’s job. It “absolutely” could happen, said Harry Kazianis, a friend of Navarro who is director of defense studies at the Center for the National Interest. “Trump’s going to look to Peter and say, ‘I know this guy. I can trust him.'”

One factor behind Navarro’s surprising resurrection is that Trump has taken renewed interest this year in trade and national security — Navarro’s issues — after having focused in 2017 on health care and tax cuts. The second factor is that Navarro is as relentless as a honey badger. He’s been in front of tv cameras repeatedly over the past week championing the tariffs. Trump plans to sign a proclamation over the tariffs Thursday.

After losing to Cohn in the White House turf wars, someone else might have packed up and gone home to California. Instead, Navarro kept working the issues and building the case for stronger action. Even now he’s not letting up, according to Michael Wessel, a steelworkers representative who speaks with him regularly.

“He is certainly excited about where he is and what’s going on because he has worked a long time to get here,” said Wessel. “But he’s running at warp speed and probably doesn’t have much time to think about it.”

Free-traders are elbowing one another aside to express their dismay about Navarro’s ascendancy — and Navarro welcomes their disdain. Although he holds a Ph.D. in economics from Harvard and taught the subject at the University of California-Irvine Paul Merage School of Business, Navarro accuses his fellow economists of blindly adhering to free-trade principles at the expense of national security.

“The president said very clearly that we can’t have a country without steel and aluminum industries, and I totally agree with him,” Navarro told Bloomberg on March 7. Echoing Trump, he added, “All the countries that trade with us are getting the better part of the deal.” He also said he is not on the list of candidates to replace Cohn.

Today’s Navarro has a monkish demeanor. He’s wiry, almost gaunt. Running shoes by the door of his office attests to his habit of running to work. He works such long hours that he stifled a laugh when a Bloomberg interviewer asked him about his “day” job. His closest administration ally is Commerce Secretary Wilbur Ross, a fellow trade nationalist.

Navarro’s not-so-secret weapon in the White House turf wars is that he has a lot in common with the president. They’re about the same age: Navarro is 68 and Trump 71. Also, neither backs down from a fight. “Peter has always been a contrarian, someone who’s never been afraid to defend his views vociferously,” said Scott Paul, president of the Alliance for American Manufacturing.

Most important, both Navarro and Trump are former Democrats who feel no compunction to stick to Republican orthodoxy on trade. Navarro was actually kind of a liberal once. He served in the Peace Corps, surfed, and later campaigned against uncontrolled real-estate development in the race for mayor of San Diego in 1992 — ironic now that he’s working for the world’s most famous developer. One poster for his 1996 congressional race read: “Peter Navarro. The Democrat Newt Gingrich fears most!”

Speaking to Bloomberg on March 7, Navarro heaped praise on his boss and described his own role as that of an enabler.

“This is the president’s vision. My function, really, as an economist is to try to provide the underlying analytics that confirm his intuition. And his intuition is always right in these matters,” Navarro said. He compared the White House to a successful football team. “The owner, the coach and the quarterback are all the president. The rest of us are all interchangeable parts.”

The interchangeable part labeled Peter Navarro got off to a strong start last year when Trump pulled the U.S. out of negotiations on the 12-nation Trans-Pacific Partnership trade deal, one of his first acts in office. Navarro also spearheaded the president’s “Buy American, Hire American” initiative, which tightens enforcement of federal procurement rules and cracks down on alleged abuse of H-1B visas and other foreign-hiring programs. In April, Trump called Navarro “one of the greats at trying to protect our jobs.”

Then Navarro started to fade from view. Trump turned his attention to the unsuccessful effort to repeal Obamacare and after that raced to get tax cuts passed by the end of the year. John Kelly arrived as chief of staff at the end of July and restricted access to the Oval Office. In September, Kelly folded Navarro’s office into the National Economic Council. Navarro was required to copy his new boss, Cohn, on emails. He wasn’t invited on Trump’s state visit to China in November.

But Navarro never stopped pushing his agenda, which intertwines economics and military readiness and puts China at the heart of U.S. policy. He pressed the Pentagon to seek increased funding for Abrams tanks and Bradley Fighting Vehicles, in part to keep open the factories in Ohio and Pennsylvania that make them, according to Wessel, who represents United Steelworkers President Leo Gerard and is a congressional appointee on the U.S.–China Economic and Security Review Commission.

He also argued successfully for the Pentagon to seek funding for another Littoral Combat Ship, again to keep the shipyards where they’re made afloat. And, according to Wessel, Navarro was behind Trump’s executive order requiring a broad review of the nation’s defense industrial base. It’s due in April.

Navarro has come a long way from his roots as a mainstream economist. He supported free trade in a 1984 book, “The Policy Game: How Special Interests and Ideologues Are Stealing America,” arguing that tariffs “protected the profits of a small core of domestic industries” while harming consumers. (He explains that because “the globalist erosion of the American economy” was just getting started, he hadn’t recognized it then.)

He concluded that it owed its success to unfair trading practices. In 2006 he published The Coming China Wars: Where They Will Be Fought, How They Will Be Won. In 2011 he wrote Death by China: Confronting the Dragon — A Global Call to Action (co-authored with Greg Autry), which argued that the U.S. and China are on a trajectory for armed conflict.

Navarro essentially barged into the China-watcher community without an invitation. “Navarro is not known in any China circles,” James McGregor, a former chairman of the American Chamber of Commerce in China, told Foreign Policy magazine last year.

But it was “Death by China” that caught Trump’s attention. Trump provided a blurb for a 2012 documentary film based on the book: “Right on. … I urge you to see it.” The trailer features a knife, representing China, that’s plunged into a red, white and blue map of the U.S. Blood leaks from the tricolor corpse. “He gets criticized for the ‘Death by China’ meme, but he’s been way more correct about China than almost any other observer,” says Paul, the Alliance for American Manufacturing chief.

Plenty of observers wouldn’t agree with Paul that Navarro is correct on China, or much of anything else. That’s unlikely to bother someone who’s followed a convoluted path to power, and who revels in his outsider role: the economist and self-made China expert who’s regarded with suspicion by other economists and China experts. And in Trump’s White House, none of that hurts him a bit.

With assistance from Andrew Mayeda