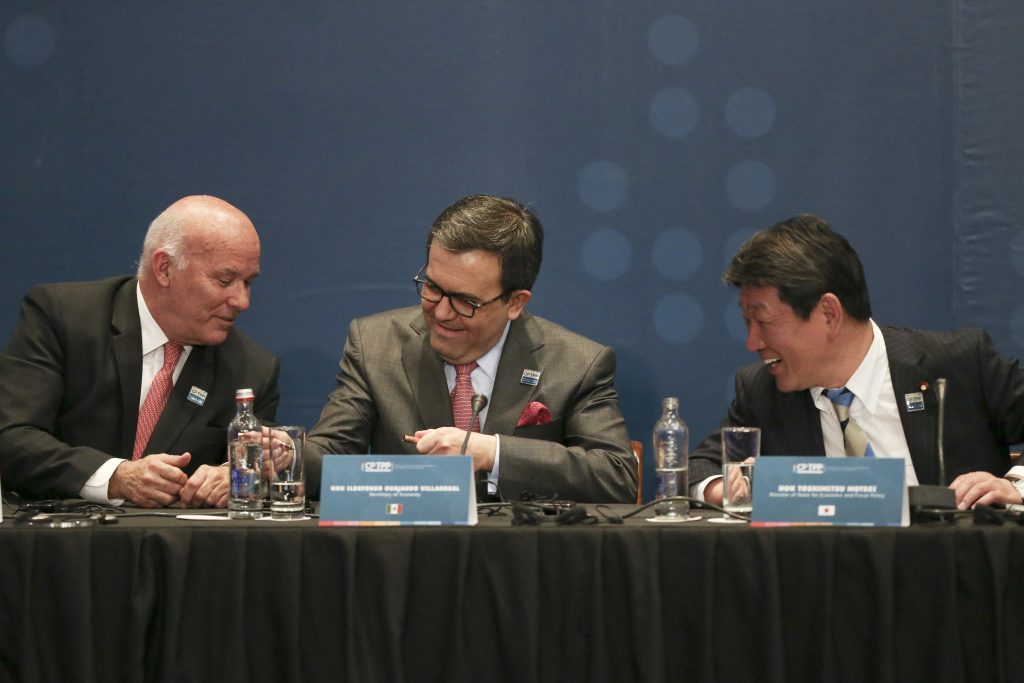 Trump withdrew the U.S. from the Trans-Pacific Partnership last year, causing fears that it would not prosper without its most influential country. But the remaining 11 members pressed ahead, saying they were showing resolve against protectionism.

The ministers dropped key provisions that the Americans had required on protection of intellectual property, among others. The renegotiated pact signed in Chile’s capital was also renamed the Comprehensive and Progressive Trans-Pacific Partnership, or CPTPP.

“It leaves the U.S. at a disadvantage from both a trade and a broader strategic perspective,” said Joshua Meltzer, senior fellow in the global economy and development program at the Brookings Institution. “It is now a trade bloc that discriminates against the U.S.”

Meltzer said the United States’ ability to shape the rules of trade in the Asia-Pacific region “is very much diminished.”

The U.S., originally the biggest TPP economy, was one of the trade deal’s strongest supporters before Trump took office. Trump has said he prefers country-to-country deals and is seeking to renegotiate several major trade agreements, including the North American Free Trade Agreement that includes the U.S., Mexico and Canada.

This is “a strong sign against the protectionist pressures, and in favor of a world open to free trade, without unilateral sanctions and the threat of trade wars,” Chilean Foreign Minister Heraldo Munoz said.

The European Union said this week that it is ready to retaliate against Trump’s tariffs — of 25 percent on imported steel and 10 percent on aluminum imports — with counter-measures against iconic U.S. products like Harley Davidson motorcycles, Levi’s jeans and bourbon.

The EU threat and Trump’s impending announcement on the tariffs were expected to escalate the risk of a trade war, in which nations try to punish each other by hiking taxes on traded goods. Experts say that tends to harm both exporting nations as well as importing countries’ consumers, who face higher costs.