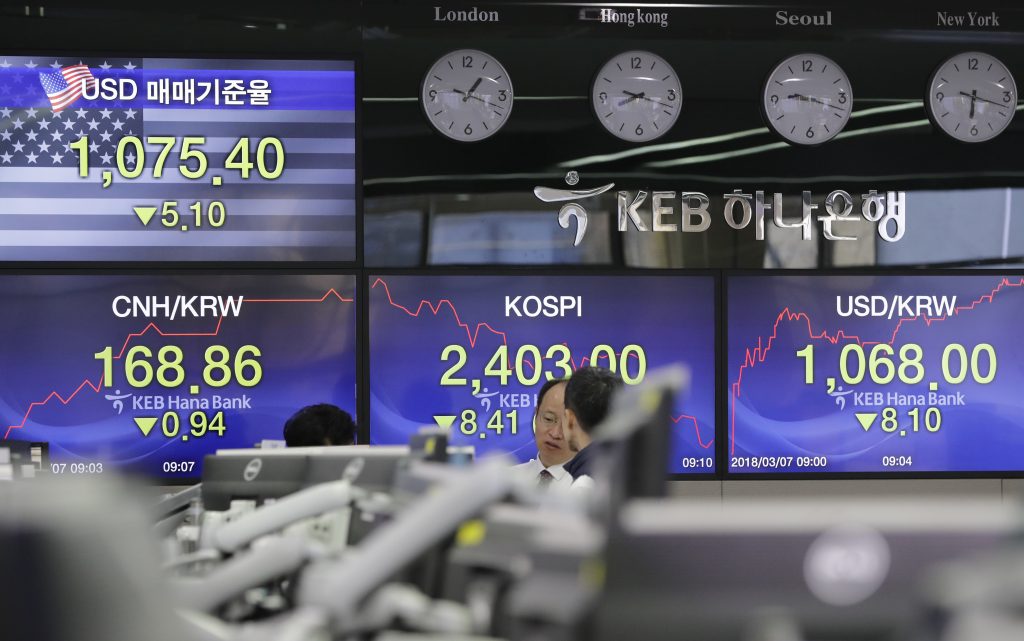 Global stocks and the dollar slumped on Wednesday after a strong White House advocate for free trade resigned, fanning fears that President Donald Trump will proceed with protectionist tariffs and risk a trade war.

White House economic adviser Gary Cohn, seen as a bulwark against protectionist forces within the Trump administration, said on Tuesday he was leaving.

MSCI’s broadest index of Asia-Pacific shares outside Japan was down 0.65 percent, while Japan’s Nikkei retreated 0.77 percent.

“If you’re looking for an excuse to sell, this is the kind of announcement that certainly causes short-term downward pressure,” said Rick Meckler, president of investment firm LibertyView Capital Management in New Jersey, regarding Cohn’s resignation.

“He [Cohn] came from Wall street and certainly large institutional investors felt he was very credible.”

South Korea’s KOSPI initially bucked the trend and rose as much as 0.75 percent amid a perceived easing of regional tensions, following news on Tuesday that South Korea would hold its first summit with the North in more than a decade.

Cohn’s resignation, however, froze a recovery in risk appetite in wider markets that had followed news of the Korean talks, and the KOSPI surrendered gains to slip 0.45 percent.

The dollar had risen to 106.470 on Tuesday amid speculation that Trump could be coaxed into watering down or holding off on the tariffs.

Against a basket of major currencies, the dollar dipped 0.15 percent.

“The worst outcome for financial markets, in terms of potential to create volatility, would be a confirmation of rising trade friction and benign neglect of the dollar in the short term,” said analysts at ANZ.

The Canadian dollar and the Mexican peso retreated as Cohn’s departure was seen as raising risks Washington could walk away from NAFTA negotiations.

Copper on the London Metal Exchange lost 0.5 percent to $6,971.50 per tonne, paring a 1.4 percent gain from the previous session.