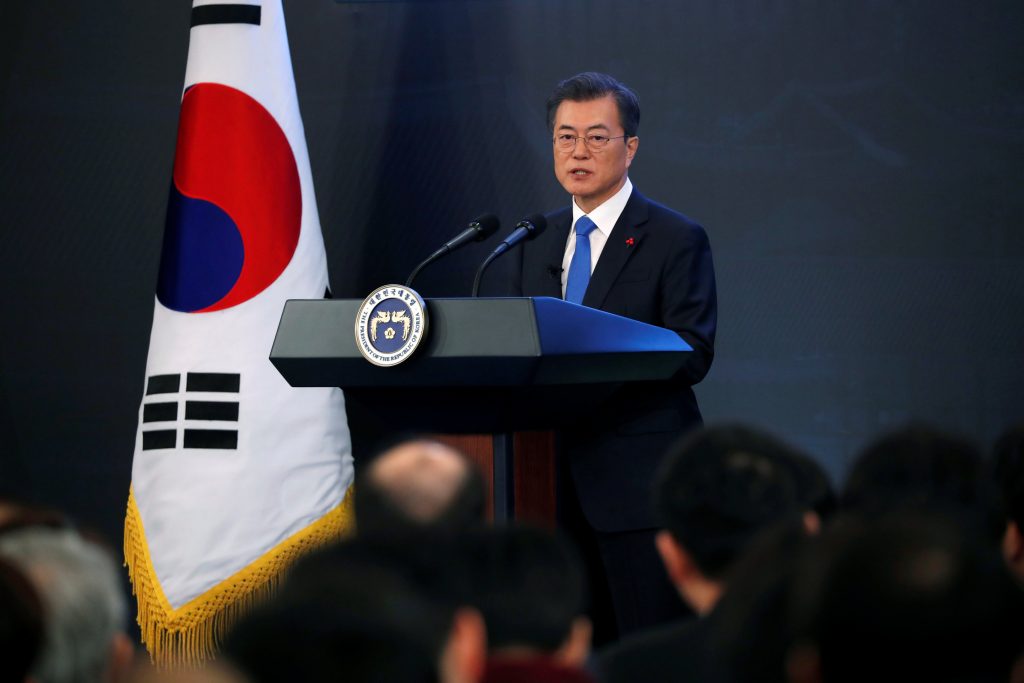 In the first meeting of its kind, South Korean officials who met North Korean leader Kim Jong Un on Monday said he expressed his willingness to denuclearize the Korean peninsula if his country’s security is assured.

Next month, North Korea and South Korea will have the first meeting between their leaders since 2007 at the border village of Panmunjom, said Chung Eui-yong, head of the South Korean delegation.

“From looking at the news or Twitter, I believe President Trump is positive about the results of the North Korea visit [by South Korean officials],” said Moon at a lunch meeting with political party leaders on Wednesday.

“However, as this is just the beginning, I believe we are not at a situation yet where we can be optimistic.”

Moon added he has no plans to ease sanctions against the North just for the sake of a summit with Pyongyang, Shin Yong-hyun of opposition Bareun Mirae Party told a briefing after the lunch.

“The president said just because talks have begun doesn’t mean sanctions pressure will be eased or lifted. There will not be any ‘presents’ for the North, either,” said Shin.

South Korea’s goal is the denuclearization of North Korea, said Moon in comments distributed by the Blue House.

“We cannot have things like the prevention of nuclear proliferation or a moratorium as a final goal,” said Moon.

Leaders around the world have also met the apparent breakthrough with guarded optimism, wary of repeating past negotiations that failed to prevent Pyongyang from developing nuclear weapons and intercontinental ballistic missiles (ICBMs).

A six-year-long effort by half a dozen of the world’s largest countries ended in failure in 2009.

Japan’s Chief Cabinet Secretary Yoshihide Suga said on Wednesday it was “extremely important” that North Korea show its commitment and concrete actions toward abandonment of its nuclear missile development in a complete, verifiable and irreversible way.

South Korean officials who met with the North Korean leader, including Chung, will depart for Washington on Thursday. Chung said he had a message from Kim Jong Un that he will relay to U.S. officials but it was unclear whether he would meet with Trump.

After returning from the United States, Chung will visit China and Russia, while Suh Hoon, the head of South Korea’s intelligence agency, will head to Japan to brief officials on the latest detente with North Korea.

Trump told reporters in the Oval Office the United States had “come a long way, at least rhetorically” with North Korea and “statements coming out of South Korea and North Korea have been very positive.”

Asked if he had any preconditions for talks, Trump said, “I don’t want to talk about it. We’re going to see what happens.”

U.S. Vice President Mike Pence said the United States would continue to apply “maximum pressure” on North Korea and that all options were “on the table” until Washington sees evidence that the reclusive country was taking steps toward denuclearization.

Keeping up the pressure, the U.S. State Department said on Tuesday it had determined Pyongyang used the chemical warfare agent VX to assassinate Kim Jong Un’s half-brother in Malaysia in 2017 and had imposed sanctions in response.

The prohibitions appeared largely symbolic as the United States has no relations with North Korea and has already imposed a number of strict sanctions on the country.

“The reality is that North Korea now has an intercontinental ballistic missile that can allegedly hit targets in the U.S.,” the paper wrote. “No one can intimidate anyone. Negotiation is the only way out.”

More than 18 hours after Seoul made the announcement, there was no comment from Pyongyang.

Markets reacted positively to the prospect of talks and a lowering in geopolitical tensions.

Shares in South Korean companies with exposure to North Korea rallied on signs of a thaw in relations, while companies in the defense market saw their shares dip.

North and South Korea are technically still at war because their 1950-53 conflict ended in a truce, not a peace treaty. The North defends its weapons programs as necessary to counter U.S. aggression. The South hosts 28,500 U.S. troops, a legacy of the war.