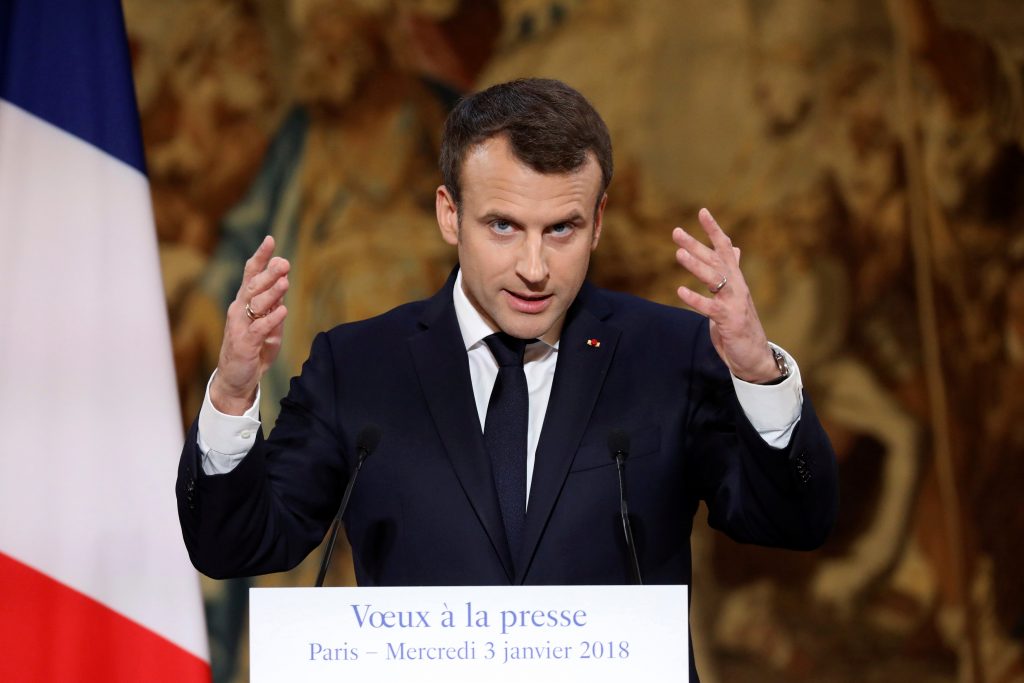 A heated debate that has split French intellectual circles over whether to publish anti-Semitic pamphlets of a renowned writer will reach French President Emmanuel Macron when he addresses a leading Jewish group Wednesday.

Macron will be the guest of honor at Wednesday’s annual dinner by the group CRIF, whose leaders plan to question the president about fighting anti-Semitism online and recent attacks on French Jews or Jewish sites.

Macron has pledged to fight persistent anti-Semitism in France, which has the largest Jewish community in the world after Israel and the United States.

Leaders of the French Jewish community also want to take advantage of the president’s presence and media coverage of Wednesday’s dinner to call broader attention to a controversy that has inflamed the French publishing, cultural and academic circles for three months.

Gallimard, one of the largest, most influential and most prestigious French publishing houses, said in December it planned to republish a series of three fiercely anti-Semitic lampoons written between 1937 and 1941 by noted French writer Louis-Ferdinand Celine, for the first time since World War II.

Born Louis Ferdinand Destouches, Celine opposed reprinting them until his death in 1961. Celine was convicted as a collaborator and declared a national disgrace in France after the war, before being granted amnesty.

A heated controversy erupted in literary circles over the publication, between those who advocate total freedom of speech and those who warn against the dangers of such texts in the context of rising anti-Semitism.

Antoine Gallimard, president of the publishing house, recently decided to suspend publication, while insisting he hasn’t given up on the project.

Proponents of reprinting argue that the texts already are easily accessible on the internet, that it is preferable that they be published with historical comments explaining their danger, and that this would no longer hide the darkest face of the writer.

Opponents note that anti-Semitism is considered a legal offense in France.

Famous Nazi hunter Serge Klarsfeld demanded that the publication plans be abandoned and, if not, threatened to ask a court to decide on a “preventive ban.”

CRIF, the Jewish group, expressed its “deepest concern,” saying Celine’s texts were an “unbearable incitement to anti-Semitic and racist hatred.”

At Wednesday’s dinner, CRIF intends to distribute a booklet written by two recognized specialists of Celine’s work to hundreds of guests present — including Macron.

“Celine was not a socialite anti-Semite, but a pro-Hitler anti-Semite,” Marc Knobel, the CRIF’s director of studies who came up with the idea of ordering the booklet, told The Associated Press. “His pamphlets are appalling, they are crime-inducing. With them, Celine expressed his execration for the Jews, called for putting the Jews to death.”

Macron hasn’t taken a stance on the issue yet. But Frederic Potier, head of a government racism and anti-Semitism watchdog, met Antoine Gallimard and asked him for “guarantees” on the historical quality of the edition being prepared.

The latest official figures show that anti-Semitic violence increased by 26 percent last year in France and that criminal damage to Jewish places of worship and burials increased by 22 percent.