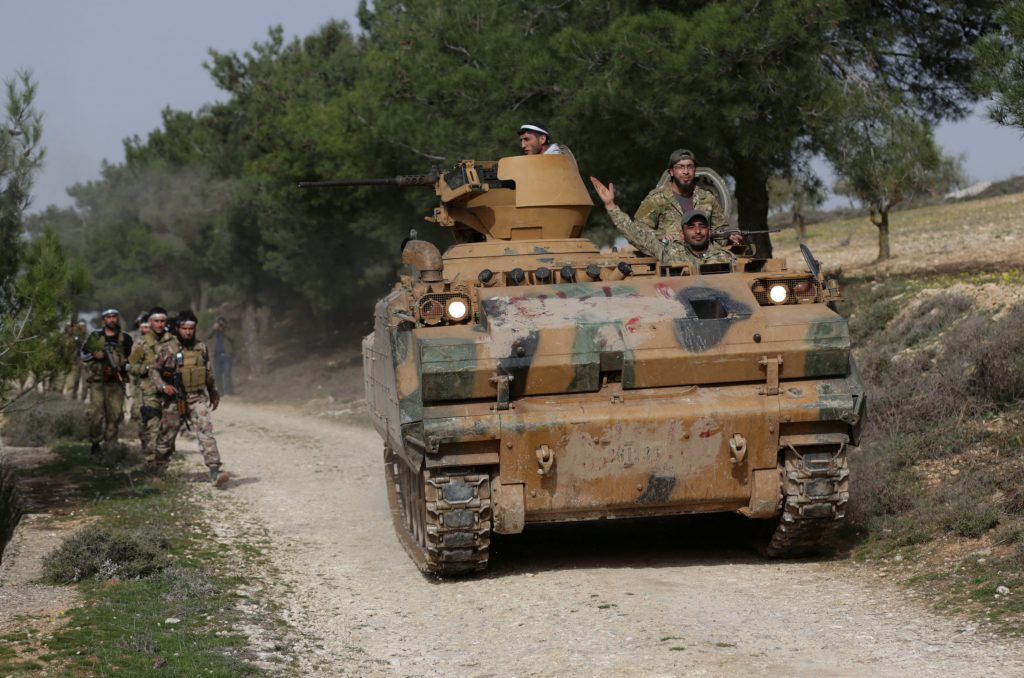 Syrian government forces pounded a town in eastern Ghouta with airstrikes on Wednesday in an effort to slice the rebel enclave in two as they intensified a campaign to deal the opposition its biggest defeat since 2016.

The Syrian government assault of the densely populated area on the outskirts of Damascus, which began more than two weeks ago, has become one of the fiercest campaigns of the war now entering its eighth year. The Syrian Observatory for Human Rights monitoring group says 800 civilians have been killed by government bombing and shelling.

Live footage broadcast by Syrian state media from the outskirts of the town of Mesraba showed enormous clouds of smoke rising into the sky. The sounds of explosions and jets could be heard.

A state media correspondent said terror defenses in the town were being struck by “preparatory fire” in advance of a planned infantry assault.

Capturing Mesraba would divide eastern Ghouta in two after days of a ground offensive that the Observatory says has already seen government forces capture nearly half of the territory. The Observatory said an extra 700 pro-government militia fighters had arrived at the front as reinforcements.

In Douma, eastern Ghouta’s biggest town where civilians from other parts of the area have sought shelter, the sound of front-line battles could be heard, a witness there told Reuters.

The United Nations says 400,000 people are trapped in the towns and villages of eastern Ghouta, under government siege for years and already running out of food and medicine before the assault. An aid convoy reached the area this week but government officials had stripped out most medical supplies.

Russia, President Bashar al-Assad’s most powerful ally, has offered rebel fighters safe passage out with their families and personal weapons. The proposal echoes previous agreements under which insurgents, in the face of military defeat, were permitted to withdraw to opposition-held areas at the Turkish border.

The U.N. Security Council has called for a 30-day countrywide ceasefire, but Moscow and Damascus have not halted the campaign, arguing that the fighters they are striking are members of banned terrorist groups unprotected by the truce.

Russia’s Defense Ministry said on Wednesday some rebels wanted to accept the proposal to evacuate. So far rebels have dismissed it in public. The military spokesman for one of the main eastern Ghouta rebel groups said rebels would defend the territory and there were no negotiations over a withdrawal.

“The factions of Ghouta and their fighters and its people are holding onto their land and will defend it,” Hamza Birqdar of Jaish al-Islam told Reuters in a text message sent overnight.

The opposition says such evacuation agreements amount to a policy of demographic change by which Assad has forcibly displaced those who oppose him.

Russian warplanes have taken part in the eastern Ghouta operation, and the White House has accused Russia of complicity in the killing of civilians there.

Defeat in eastern Ghouta would mark the biggest setback for the anti-Assad rebellion since the opposition was driven from eastern Aleppo in late 2016 after a similar campaign of siege, bombing, ground assaults and the promise of safe passage out.

Moscow and Damascus say the Ghouta campaign is necessary to halt rebel shelling of the capital. The Observatory says such shelling has killed at least 27 people since Feb. 18, and Syrian state media have given a higher death toll.

Assad has steadily recovered rebel-held areas in western Syria since Russia intervened directly on his side in 2015.

United Nations Secretary-General Antonio Guterres on Tuesday voiced concern about attacks in eastern Ghouta which “reportedly claimed the lives of more than 100 people” on Monday alone, as well as reports of shelling of Damascus.

Western states have been demanding that Russia get Assad to abide by the 30-day ceasefire. The U.N. Security Council, where Russia holds veto power, will meet on Wednesday to discuss the failed ceasefire.